April 17, 2019 By Kendra Seymour Economics, Wisdom from the Downstream Wizard

California’s gasoline prices consistently outpace average pump prices across the U.S., but in the past month, Californians have experienced an average price increase of roughly 60 cents per gallon, spiking the Golden State’s fuel prices even higher than usual, as you can see in the chart from GasBuddy, below. What’s going on here? Why the spike?

Global factors such as the rise in West Texas Intermediate (WTI) crude oil price, the Organization of Petroleum Exporting Countries’ (OPEC) reduction in output, and unrest and crisis in oil-producing countries like Libya and Venezuela (which constrain crude oil supply) have certainly contributed to California’s current price increases. But in-state refinery problems are the biggest factor in play. Of the ten major refineries in California, six have recently experienced planned or unplanned outages, leading to production disruptions. These disruptions have led to a sharp decline in gasoline production on the West Coast (PADD 5), as shown in the figure below. 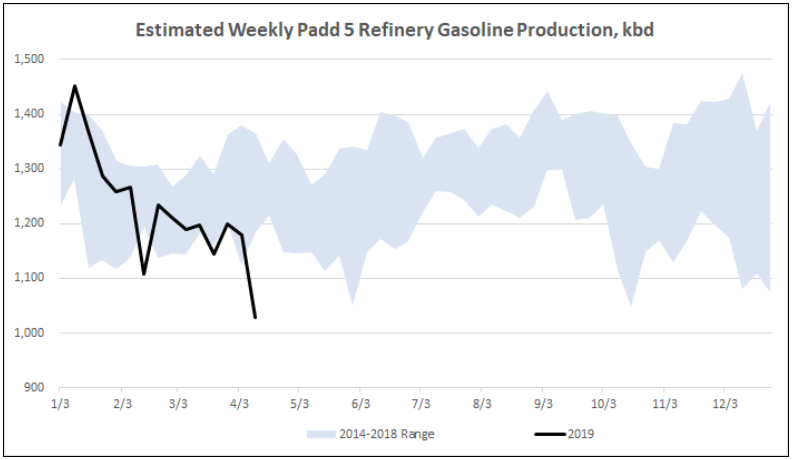 Refinery outages — especially unplanned outages — make traders nervous about meeting contracts. In these periods of market disturbance, when expected supply deviates from planned levels, gasoline traders and logistics personnel are strongly motivated to secure coverage for their physical requirements as quickly as possible. The result is often exaggerated price movements (or spikes) in the spot market – the point at which gasoline is first traded. The figure below shows how steeply that spot price has increased in the past month, rising by more than 60 cents per gallon – matching the average retail price increase experienced by California drivers. 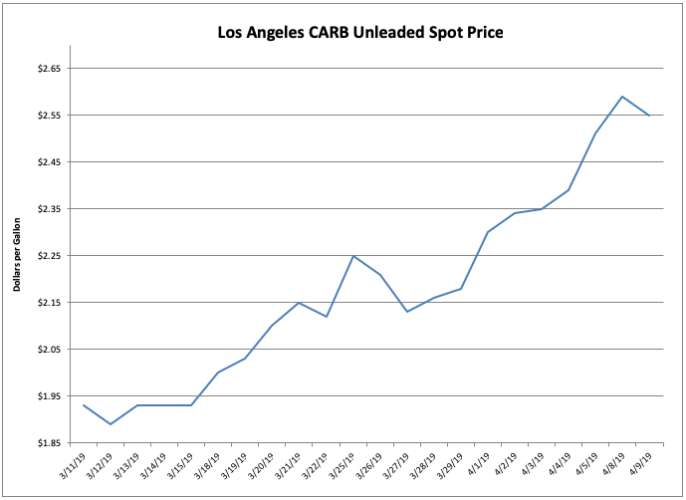 When the refineries come back online, supply will increase, and prices will come back down. Stillwater estimates it will take roughly six weeks to get the refinery issues sorted out, but the cost of fuel will likely not drop back to previous levels immediately. Instead, pricing is likely to suffer from the “rockets and feathers” effect – rising quickly (rocket) then floating back to stasis (feather). This effect results from the highly opportunistic market-monitoring and independent price-setting exercised by many retailers.

There are, of course, other factors contributing to California’s current and ongoing gas price woes. A few of the additional regional factors are:

The bad news: The recent rise in price has probably not hit its peak. The portion of the price increases that relates to refinery issues will take weeks to resolve; spot prices are still on the rise; and additional price increases due to the seasonal blend transition, disruptive weather events, and new taxes are impending.

Was this explainer helpful? Subscribe to our Newsletter to receive helpful articles like this one straight to your inbox once a month.