The Renewable Fuel Standard – Part 3: Where to from here?

This is the third and final segment in a series of articles on the Renewable Fuel Standard (RFS). In part one, we discussed the context around the passage of RFS. Part two covered the program’s primary goals and the progress to-date toward each goal. Today we conclude our series by looking down the road to discuss a new way to think about the competition between petroleum fuels, biofuels, and electricity.

A Review of Where We Are
The RFS had three primary goals: improved energy security, increased U.S. agriculture demand, and decreased greenhouse gas (GHG) emissions. The program delivered substantial benefits for higher agriculture demand and prices, particularly for corn and soy. RFS delivered some added energy security to liquid transport fuels, but the major improvements were achieved through a surge in domestic oil production brought on by fracking and the shift away from imports originating in the Middle East in favor of imports from Canada. As discussed in Part 2 of this series, for GHG reductions, RFS reduced relative emissions in the transport sector by as much as 2.5%, and fuel economy standards contributed some as well. However, the growing economy after the recession counteracted these policies, resulting in incremental growth of GHGs in transportation rather than a reduction. Thus, of the three primary goals underlying RFS, two have been largely met by biofuels or other means, but the third – U.S. GHG emissions reduction from transportation – remains unmet and since the 2008/2009 recession are getting worse. In the meantime, GHG emissions from the power sector are significantly lower since the time RFS was first enacted and are expected to continue dropping with increasing investments in renewable and natural gas power. 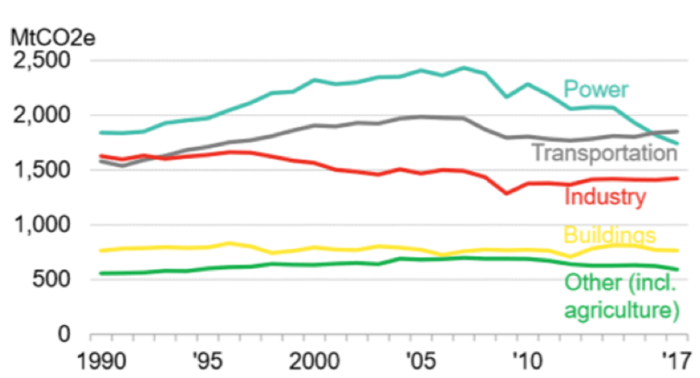 Does this mean that RFS should be scrapped? Some argue that small contributions are better than no contribution, and, ultimately, reversing the benefit to the agriculture industry is not likely to gain political support. Earlier in 2018, Stillwater Associates suggested improvements to RFS that would maintain biofuels consumption levels, reduce regulatory complexity, and provide more regulatory stability.

That said, if RFS did not previously exist and was being proposed as new policy today, it would be much less likely to gain the critical, geographically diverse, bi-partisan support it enjoyed in the 2005-2007 timeframe because the energy security and GHG reduction arguments would be weaker today as we now understand that other options are more impactful. Further, the environmental community, disappointed with the lack of development of advanced biofuels, has moved on to supporting electrification as the preferred pathway to reduce GHG emissions from transportation. The California Low Carbon Fuel Standard includes the option of compliance through the use of electric vehicles. Let’s consider this threat to the wider U.S. liquid transport fuels market a bit further.

Are Electric Vehicles a Real Threat to Liquid Fuels?
The electrification of transportation has often been discussed and regularly dismissed as unrealistic. In the short-term, electric vehicles are an incremental option for the US. Infrastructure investment and consumer behavior are certainly barriers, but this should be watched carefully. Not only are renewable consultancies like Bloomberg New Energy Finance predicting aggressive global growth of electric vehicles, but so are global oil & gas companies and OPEC. 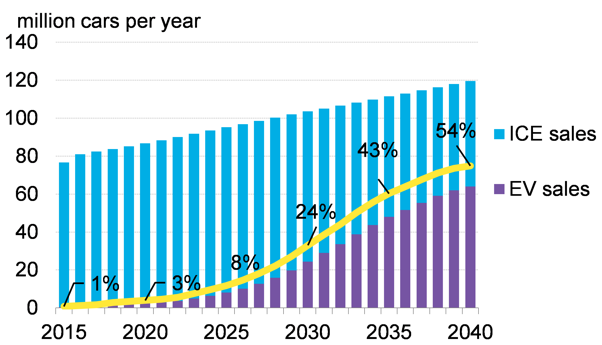 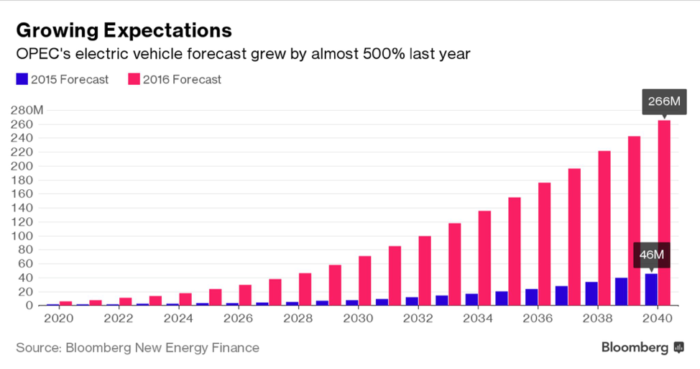 According to Bloomberg, China is likely to be the first large market to convert to electric transportation on a large scale, driven by its overwhelming air quality problems but also by its world-leading investments in renewable power, electric car manufacturing, battery manufacturing, and back-integration into the necessary metal supply chain for batteries. China sometimes over-invests in manufacturing, such as solar panels and flat-screen TVs, driving down world prices for these items. Through global trade, the world’s consumers benefit from these lower costs, and the same is likely to happen with batteries, driving down their cost in electric vehicles for the U.S. 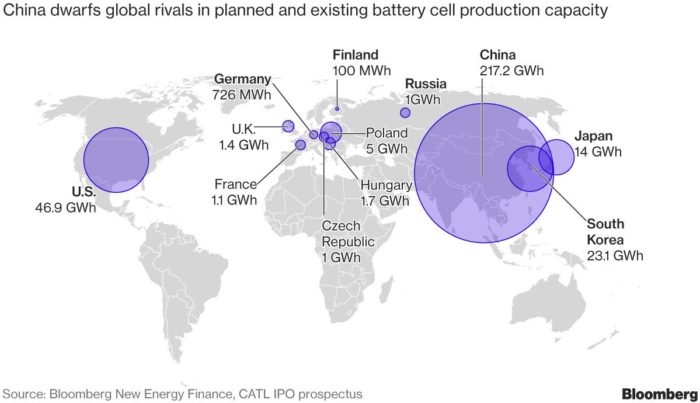 Even if electric cars become cost competitive, some argue that electric cars are not as environmentally friendly as their drivers think because the electricity used to power the car is made primarily by burning fossil fuels (coal and natural gas). Additionally, there are environmental issues associated with mining and disposing of battery metals. For this discussion, we focus on GHG emissions and address the fast-changing power markets.

Let’s take Texas – the largest producer of wind and solar power in the U.S. – as an example. In the Texas Power Grid (ERCOT), consumers have access to a more deregulated power market than in other parts of the country. As such, Texas consumers have the option to purchase 100% renewable power (wind and solar) for their businesses or homes. In some cases, renewable power contracts are lower-cost than blended power coming from the average electricity supply generated by fossil fuels and non-fossil fuels.  This means that a Texas consumer can buy 100% renewable electricity to charge their electric car at home, making the car’s emissions 100% carbon-free.

Further, businesses both inside Texas and around the country are increasingly buying 100% renewable power contracts either through physical supply or virtual supply through Renewable Energy Credits (RECs) for their own business use, their employees, and their customers. 2018 is expected to set new records. Initially, the five most valuable U.S. companies lead the trend (Apple, Amazon, Alphabet, Microsoft, and Facebook), but now this trend has spread to more industrial and consumer companies like GM, Dow Chemical, Kimberly Clark, Walmart, Target, and IKEA. 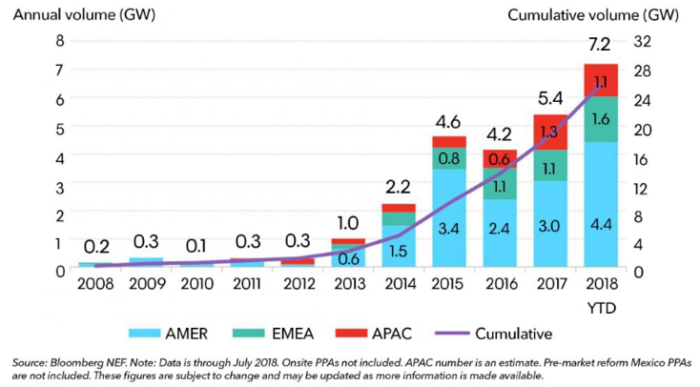 Charging electric vehicles is likely to shift the “retail” model from quick refueling while driving (liquid fuels) to recharging where you linger. Given that most cars spend a vast majority of their time parked, the transportation fuels industry should prepare for a paradigm shift centered around the “refueling” of electric cars. Recharging an electric car will be done when the car is not being used – at home, at work, or while shopping. With the number of companies and municipalities moving to 100% renewables, pairing electric vehicles with these channels for renewable power will further enable the transformation of electric vehicles to carbon-free emissions. (Note: Electric cars will have the largest penetration in large urban areas where typical driving distances are shorter and charging infrastructure is likely to be most concentrated.)

In essence, whereas transport fuels previously were either petroleum-based or biofuels-based, there is a viable argument to be made that, in the long-term, electric vehicles will not only become lower-cost, but also can achieve carbon-free emissions. As such, they can be a meaningful contributor to lowering GHG emissions in transportation. Even without 100% renewable power, the overall GHG footprint of U.S. power continues to decrease, driven by the increasing use of natural gas.

Business schools teach a concept called “Coopetition” – a combination of competition and cooperation. Trade associations are a good example of coopetition, with competitors in a market finding ways to cooperate on common policy issues impacting their industry. Petroleum fuels and biofuels can compete with each other in the short-term for market share, but they might benefit from considering they are in the same boat with respect to competition with the longer-term threat of low-GHG electricity.

Tying this back to RFS
If GHG emissions reduction matters, RFS might be more strategic to the liquid transport fuels industry than many think because it maintains the carbon policy separation between the transportation and electricity sectors, favoring liquid transport fuels. Current U.S. energy policy has segmented transportation from other energy segments. The transportation sector uses carbon credits in the form of renewable identification numbers (RINs) while renewable energy credits (RECs) are the form of carbon currency for the power sector. Each form of carbon credit stays within its sector. Movement toward a nationwide LCFS model or economy-wide carbon fee/tax model would allow carbon currencies to move between sectors, further encouraging competition between liquid fuels and electric vehicles.

The issue of GHG emissions may politically ebb and flow, but it is not going to go away. As we saw in the last decade with the rapid emergence of fracking, sometimes markets transform quickly. Will there be dramatic changes in the energy markets in the next decade? Energy supply companies, energy consuming companies, financial institutions, coastal city budgets, and coastal housing markets are showing signs that the risks of climate change are impacting markets. More is needed from the transport fuels industry to manage the risk of GHG emissions. RFS was expected to deliver more on this issue. Where it can, it should be encouraged to do so to reduce the risk of policy disruption. But instead of being seen an offensive policy for lowering GHG emissions, it may end up being a defensive policy helping to protecting liquid transport fuels from the likely long-term encroachment from the low-GHG power segment.