In Part 1 of this series, we discussed the background and drivers for the implementation of the U.S. Renewable Fuel Standard (RFS). In Part 2, we will look at how RFS has performed against each of its three primary goals:

Improved Energy Security
Never discount serendipity and the power of invention. While domestic oil production continued to fall for a few years after the 2007 passage of the Energy Independence and Security Act, in the hinterlands of Texas, Oklahoma, and North Dakota “wildcatters” were doing what they do best – using chutzpah and gut feel to find new ways to use horizontal drilling and ever-improving hydraulic fracturing methods to improve the extraction of oil and gas from shale. The boom in this “fracking” industry not only turned the U.S. from a net gas importer to a net exporter and potentially world-leading liquefied natural gas (LNG) exporter, it also revolutionized the oil-production industry in the U.S. The gap between supply and demand was significantly closed and could close completely in the coming years. 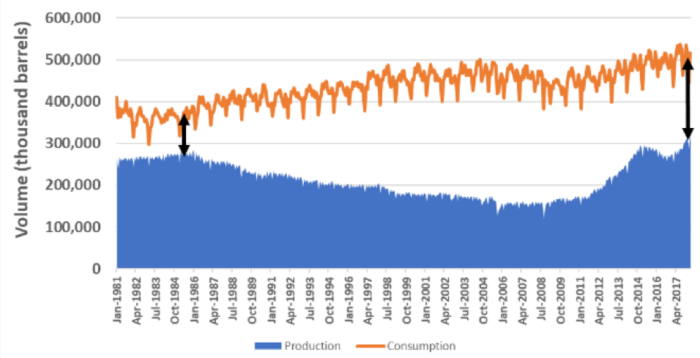 Not only has the U.S. started exporting sweet crude oil that is valued more highly elsewhere than in the U.S., it has also significantly reduced imports from potentially unfriendly Middle Eastern countries while leaning more on Canada for the oil it does import.

Clearly, domestic energy security pertaining to oil and transport fuels has improved dramatically over the last decade. The change was transformative. Biofuels provide some help (about 5%) with the overall transport energy security picture, but fracking was the overwhelming driver of change for U.S. energy security, dwarfing the impact of biofuels.

Increased Demand for U.S. Agriculture
Almost immediately after the RFS was passed in 2005, corn and soy prices doubled.  Whereas agricultural production and prices are always subject to some fluctuation due to weather variations from year to year, a new price floor for corn and soy prices emerged which was about double the previous level. Following the implementation of export policies, corn prices increased from $1/bushel to $2/bushel. After the RFS was implemented, the corn price floor increased from $2/bushel to $4/bushel. Soy, which is a rotation crop with corn, shows the same pattern. 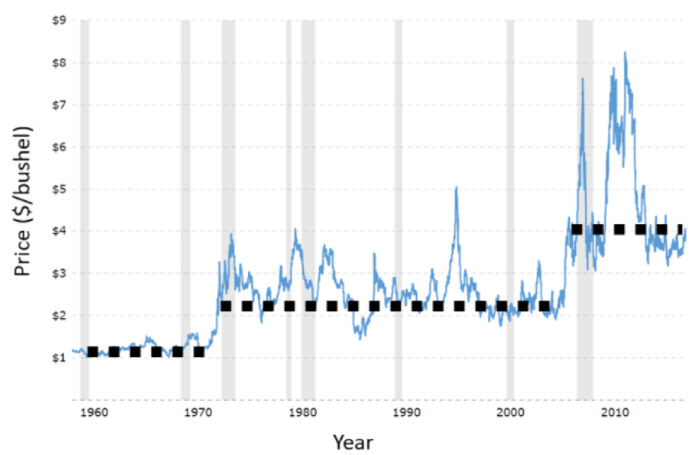 Clearly, RFS had the intended impact on increasing corn and soy prices, providing benefits to the agricultural economy. It also drastically reduced direct U.S. government payments to farmers to compensate for low prices. Some stakeholders describe the RFS as a government subsidy in a different form.

Reduced GHG Emissions
Determining direct GHG emissions from a transport fuel is relatively straightforward; determining indirect GHG emissions is not. In the early days of biofuels policy development, there was a lot of controversy over the GHG savings from different types of biofuels. Over time, however, accepted methodologies for determining the GHG savings of different biofuels have emerged under programs like the federal RFS and California’s Low Carbon Fuel Standard (LCFS). The largest biofuel in use (corn ethanol) has the lowest GHG benefit (as low as 20%). Biofuels with larger GHG benefits (50% or greater) are limited by low availability (vegetable oil or tallow-based biodiesel), international competition (sugarcane ethanol), or technological or commercial viability problems (other advanced and cellulosic biofuels). Biogas-based biofuel developed as an option, but it is also limited in overall transport fuel volume due to supply constraints.

Biofuel use in the U.S. transportation market makes up about 5% of the fuel volume. If we are generous and say that all biofuels have an average 50% GHG savings on a weighted average basis, then RFS has contributed 2.5% or less reduction to GHGs for transport fuels. It is something, but not very impressive. Meanwhile, the larger impacts swaying GHG emissions in transport fuels are fuel economy increases and swings in the economy. For example, carbon emissions in the transportation sector dropped in 2008 and 2009 primarily due to the recession – which resulted in people driving fewer miles to cut costs and left people with less money to buy goods that needed to be shipped across the country – and have marginally increased as the economy recovered. These larger factors dwarf the impact of the RFS on GHG reductions.

Compared to the industrial, residential, and commercial energy industry sectors which are seeing steady GHG reductions, the transportation sector is the laggard with marginal GHG increases as the economy has recovered from the recession. Non-transport sectors are benefiting from higher energy efficiency, the swapping of natural gas power for coal power, and the rapid growth of wind and solar power production. 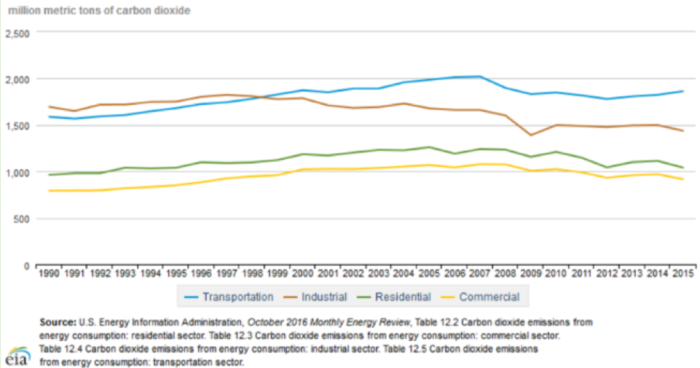 Next month, in the final part of this three-part series, we will conclude with a discussion of where RFS goes from here.