In an effort to further reduce hydrocarbon consumption in the U.S., 95 RON (Research Octane Number) gasoline has been suggested as a way to help achieve proposed higher corporate average fuel economy (CAFE) requirements. A higher RON allows an internal combustion engine to run at a higher compression ratio, achieve more power, and, therefore, the vehicle could get more miles per gallon (mpg). This higher CAFE requirement is the subject of a political game of ping-pong between the federal government and the state of California; as such, it has not yet been made final.

CAFE Background
The figure below shows historic federal CAFE requirements along with those proposed under the Obama administration, which included a sharp increase in vehicle fuel efficiency.

The steep rise in CAFE standards shown in the figure above has been tapered by the Trump administration which intends to maintain the 2020 CAFE requirements out to 2025. The 2020 CAFE requirement is 36.9 mpg (the average of light-duty truck and passenger car requirements) while the previously approved average requirement for 2025 was 51.4 mpg. The decision to back off of the previously set aspirational requirements has led to some interesting back-and-forth for the U.S. Environmental Protection Agency (EPA), especially with the state of California. Through its exemption from certain EPA requirements, California stated that vehicles sold in that state would require higher CAFE than the federal standard in an effort to meet the California Green House Gas Emissions and Zero Emissions Vehicles requirements. California developed an agreement with several automobile manufacturers to produce these higher mpg vehicles. The Trump administration’s EPA and Department of Transportation (DOT) then informed California that the state’s move effectively set CAFE standards for the nation, a duty exclusively granted to the federal government (EPA and DOT). Additionally, EPA and DOT indicated to California that automobile manufacturers could be found in violation of anti-trust regulations by making this agreement. Bottom line: As the agencies continue their volley, uncertainty is the rule for industry, making planning difficult.

Status of Current RONs
At the pump, consumers buy their gasoline based on Road Octane, which is the average of RON and MON (Motor Octane Number), also known as Anti-Knock Index (AKI).  Stillwater estimates the gasoline RON is about five numbers higher than the road octane rating (RI) we see on the pump. As such, the 87-octane Regular gasoline most people buy has a RON of about 92.

Estimates of RON supply (based upon 2018 U.S. Energy Information Administration (EIA) data and minimum Road Index requirements by state) indicate that every region of the country has an average octane well below the 95 RON target.

The tables below show the 2018 sales volumes of the various grades of gasoline and estimated RON by region of the country. EIA divides the country into the five geographic regions – Petroleum Administration for Defense Districts (PADDs) – displayed in the table. PADD 1 is the East Coast region, PADD 2 covers the Midwest, PADD 3 is the Gulf Coast, PADD 4 encompasses The Rockies, and PADD 5 is the West Coast plus Hawaii and Alaska. 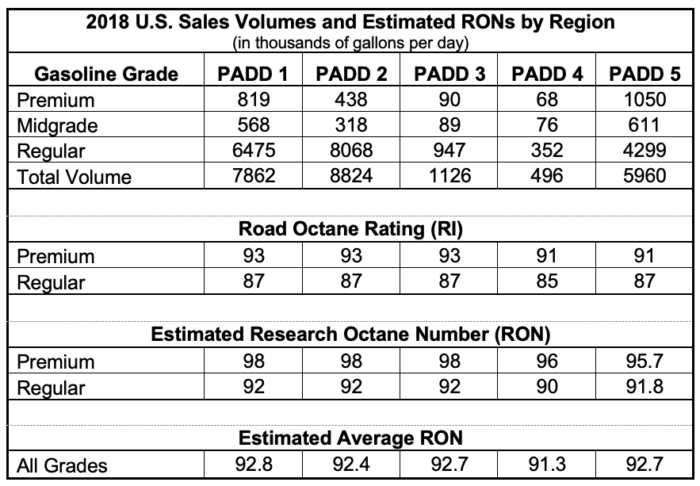 As we can see, while the RON for Premium and most Midgrade (which is essentially a 50/50 mix of premium and regular) gasoline already meets the proposed requirement of 95, the RON of Regular falls far short.

Pricing Impacts
Given the current RON landscape, how would a 95 RON requirement impact the cost (and likely consumer price) of gasoline? The cost of octane varies by PADD, as shown in the table below. Based on 2018 EIA end-user data, the price of premium gasoline versus regular gasoline ranges from 33 to 73 cents per gallon (cpg). This translates to a value of 8-12 cents per gallon for each incremental octane number. For example, for PADD 1, 60 cents per gallon for a 6 RI difference equals 10 cents per octane gallon.

The data imply that the change to 95 RON will come with a cost. Unfortunately, this cost of octane cannot be extrapolated linearly to determine the increased cost to get to 95 RON. As the table above shows, PADDs 4 and 5 have a lower cost for octane but that is likely because the Premium octane required is 91 RI as opposed to the other PADDs that call for a 93 RI. In the same way that the last mile of a marathon is harder to run than the first mile, the higher octane is more difficult (i.e. more expensive) to produce than the previous octane.

Refiner Implications
Agencies should also consider the impact a switch to 95 RON would have on communities. Increased cost to consumers will be the first issue to analyze, but other changes are equally important. For example, the demand for gasoline in the U.S. has decreased over the last several years. How will an octane change impact local refineries? Will the increased octane requirement cause a local refiner to shut down or change operation dramatically such that the refinery no longer employs as many people or brings in as much revenue to the community?

The environmental impact to achieve the higher RON gasoline pool should also be considered. In general, the biggest bang for the buck comes from increasing RON by increasing aromatics content, olefin content, or both.  Increasing aromatics and/or olefins will generally increase the NOx emissions of the fuel – an undesirable outcome environmentally speaking. It should also be noted that the RON value of ethanol decreases as the aromatics and olefins are increased. This impact will be most noticeable in California where CARB gasoline specifications have a limit on aromatics and olefins incorporated into the fuel.

Importantly, we note that increased Alkylate capacity is in general not an effective way to meet the proposed 95 RON requirement. Alkylate increases the Motor Octane Number (MON) of gasoline in a strong way, and also the RI of gasoline, but provides much less of a benefit in achieving 95 RON. However, it could become part of the solution in California as a means to offset the emissions impacts of higher olefins or aromatics in the gasoline.

So, if 95 RON becomes the new fuel requirement, what do refiners have to look forward to?  Each refinery will need to determine the best way to increase the RON of the pool that they are working with. Some options include:

Although other options may be available, those listed above are the most likely options refiners would choose. However, each option comes with a cost or negative impact. Furthermore, increasing ethanol percentage in finished gasoline would increase the RON, but ethanol has a much lower energy content, so the desired increase in mpg would be unlikely to materialize under that option.

If the 95 RON requirement is adopted, it will not be necessary to switch over all gasoline to a minimum of 95 RON, nor will the transition occur instantaneously. It would take nearly 20 years for the nationwide fleet to fully convert. Refiners tend to be good at making smaller incremental improvements to achieve better performance. These incremental goals are frequently intended to increase crude throughput or allow less expensive feedstocks to be used, but they can also move refiners toward producing a more desirable product. If 95 RON becomes the new industry standard, the first year will likely have no impact as midgrade gasoline could be used as the 95 RON grade with minimal changes.  From that point, refiners will need to determine if they can meet new octane requirements through small tweaks or if more significant adjustments will be required.

The challenges associated with converting to a 95 RON gasoline are significant, but the first step is to watch the political ping-pong game. It isn’t over until the final score is in.