Where were you when Saudi Aramco was attacked?

The recent bombing of the Saudi Arabian Abqaiq gas-oil separation processing plant on September 14th sparked a frenzy of conversations among oil and gas professionals. Wall Street wanted to know how this geopolitical event would affect the price of crude oil, whether it would become a macroeconomic nightmare for the demand and supply balance of energy in the world, and what the impacts would be on global energy markets. So-called “Main Street” Americans, on the other hand, wanted to know how the bombing would affect the price of the gasoline they need in order to get to work.

I was recently asked where I was when I heard about the Saudi Arabia bombing. We often ask or hear the same question about September 11th – the day in 2001 when terrorists attacked the World Trade Center in New York City and the Pentagon in Arlington, Virginia and downed United Flight 93.

On September 11th, I was in a conference room on the 6th floor of the ExxonMobil Headquarters in Fairfax, Virginia reviewing a project on installing a diesel desulfurization process facility at a refinery in Australia. After the first plane hit the trade center, a colleague came into the conference room, his face pale and covered in an expression of shock. With shaking hands, he turned on the television, and we watched in horror as the first tower went down, then the next.

We watched in total silence, then we heard a big bang and saw smoke coming through the trees. The Pentagon had been hit, and the emergency sirens in the building sounded loud in our ears. We were told to evacuate the building and go home. When I asked why we were being sent home, our safety team lead explained that as a major oil and gas energy company, ExxonMobil could be attacked. Having only spent four years in the industry at the time, I did not fully grasp the fact that oil and gas production might be a prime target for terrorism.

Eighteen years later, on September 14, 2019, the Abqaiq oil stabilization facility and the Ghawar oil field supplying the facility were attacked, not by passenger aircraft but by drones and missiles. When asked where I was when I heard the news, I did not have a lengthy story to tell. Maybe because it was so recent in my mind or maybe because I was performing almost the same activity as I had been at the time of the 9/11 bombing.

On September 14th, I was sitting at my desk catching up on work I had not finished by Friday. The news of the attack flashed across my screen, and this time rather than responding with shock my mind began calculating what this could mean for the industry that I am now more familiar with. The chatter on Twitter focused on people’s need to fill up their gas tanks before fuel prices escalate. Meanwhile, I was left thinking about my colleague’s wise words in 2001 – oil companies could certainly be targeted by terrorists.

When the largest oil company in the world supplies approximately 7% of the world oil, has over 50 years of oil reserves,[1] and produces over 70% of its product at one location (the Abqaiq facility), that company draws interest.

Yemen’s Iran-aligned Houthi group claimed the attacks against two plants at the heart of Saudi Arabia’s oil industry which knocked out more than half of the Saudi output. Five million barrels per day of crude production had been impacted, close to 5% of global oil supply.

Saudi Arabia’s Aramco Abqaiq gas-oil stabilization facility is unique in the international oil and gas industry because of its function, location, and scale. The oil processing unit consists of multiple spheroids and 18 stabilizer columns where hydrogen sulfide and light hydrocarbons are removed from the crude oil.  Oil coming out of a wellhead is usually a “hydrocarbon soup” made up of hydrogen and carbon. The number of hydrogen and carbon atoms in each molecule of the “soup” determines whether the molecule is a gas, like the natural gas that cooks love to use as fuel for their stoves or that provides clean power to generate electricity. Cars rely on heavier hydrocarbons like gasoline, and still heavier hydrocarbons make up diesel fuel to power trucks and trains. Still heavier hydrocarbons are turned into asphalt to pave our roads. Oil refineries take crude oil from tankers or pipelines and separate crude oil into its separate components for cooking, gas tanks, or highways.

The diagram below illustrates the phase along the supply chain from wellhead to the consumer that was impacted due to the attack. 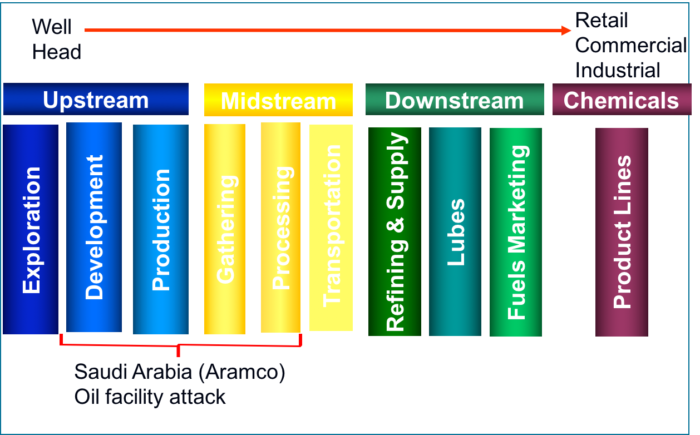 WALL STREET REACTION
There was a 20% rise in world crude oil prices on September 16th, the Monday after the attack. Those prices fell back after the Saudis announced that the plant was still producing 2 million barrels per day and would be fully back online by the end of September. Retail gasoline prices popped up about 12 cents per gallon but have leveled off as crude began falling back to pre-attack prices. Wall Street also offered some perspective which might have tempered Main Street reaction. U.S. Gas Price Averages were $3.6227 gal on September 15th in 2011, $3.867 gal in 2012, $3.523 gal in 2013, $3.389 gal in 2014, and by contrast the 2019 average as of September 15th was $2.565 gal.

For all the Twitter chatter, people did not actually bombard gas stations to fill up their tanks worried that there would be a shortage in gasoline. This tempered reaction could have been because the attack happened on a weekend, because gas prices are historically low. It could also have been because no lives were lost, and the Saudi’s announced that they would be back online with full production by the end of September.

Whatever the reason for each consumer, there are also fundamental changes that have occured in recent years which have helped reduce the shortage of immediate supply in the market. Among these changes is the holding of Strategic Oil Reserves. The U.S. has previously coordinated stock releases in the buildup to the Gulf War in 1991; after Hurricanes Katrina and Rita damaged offshore oil rigs, pipelines and refineries in the Gulf of Mexico in 2005; and in response to the prolonged disruption of oil supply caused by the Libyan Civil War in 2011. International Energy Agency (IEA) member countries hold about 1.55 billion barrels of emergency stocks in government-controlled agencies, which amount to 15 days of total world oil demand. IEA member countries also hold 2.9 billion barrels of industry stocks as of the end of July, a two-year high that can cover more than a month of world oil demand.

Light-duty vehicles account for one-quarter of global oil demand. If gasoline prices are a major influence on consumer behavior, then the role fuel prices play in the market and the direction they may head in the future becomes important. Future development and a push to increase hybrid and electric cars may have given people a sense that there are commercial alternatives to gasoline-powered cars. The U.S. is a net importer of 5 million barrels per day of crude. However, the rise of U.S. shale oil discoveries has led to reduced dependence on foreign crude and agility in increasing production to react to short-term supply loss. However, despite the major changes in oil markets over the period to 2040 and the rise in U.S. output, seaborne crude oil trade from the Middle East to Asia and around the world remains critical.

Disruptions to global oil supplies always pose a risk, whether they are caused by extreme weather events such as hurricanes, major technical outages, or geopolitical crisis.

Where were you when you first learned of the Saudi Arabia attacks? I don’t know about you, but I was not rushing out to the gas station to fill up my tank, because it takes a lot to finally get gasoline to a gas station. Job growth in the shale areas of Ohio, West Virginia, and Pennsylvania has been terrific and is likely to continue. Even though the U.S. has an abundance of oil and gas and is exporting both, the attack in Saudi Arabia highlights the fact that these facilities are vulnerable to asymmetric warfare.