Very Merry Bubble Map: A Gift at the Gas Station

December 11, 2014 By Megan Wisdom from the Downstream Wizard 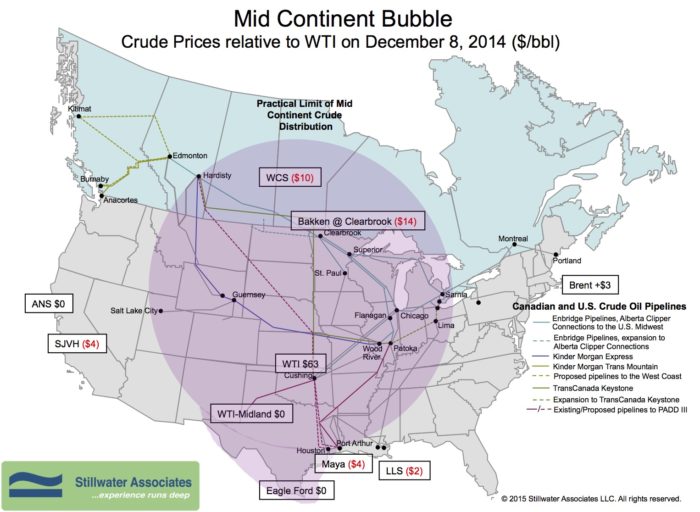 Filling up the Stillwater Honda Odyssey cost a very jolly $45 this week, the delightful effect of a glut of crude oil supply. The drop in prices at the pump is giving consumers a little unexpected year-end bonus. Crude oil spot prices are the lowest they’ve been since we started this blog. On Monday WTI hit an all time Bubble Map low of $63.

Mid Continent discounts to WTI are still in the double digits, with Western Canadian Select at $10 under and Bakken at $14 under. Eagle Ford and WTI-Midland remain at parity with WTI. And, in another first in Bubble Map history, Alaska North Slope is also at parity with WTI. Brent and San Joaquin Valley Heavy differentials have narrowed with Brent $3 over and SJVH $4 under WTI. Louisiana Light Sweet and Mexican Maya discounts were at $2 and $4 under WTI respectively.

The crude oil market is suffering from over supply and falling global demand that is driving down prices. OPEC’s announcement in November that it would not cut production has only compounded the issue. According to the EIA’s Short Term Energy Outlook (STEO) released this month, this weakening of the market is bound to continue through 2015 as inventories continue to build.

The drop in prices has already prompted some U.S. producers to cut back on spending. ConocoPhillips announced at the end of October that they would reduce spending and scale back drilling in West Texas and the Rocky Mountain region, while still meeting their production target. We’ll be watching to see how the market affects smaller U.S. producers in 2015.