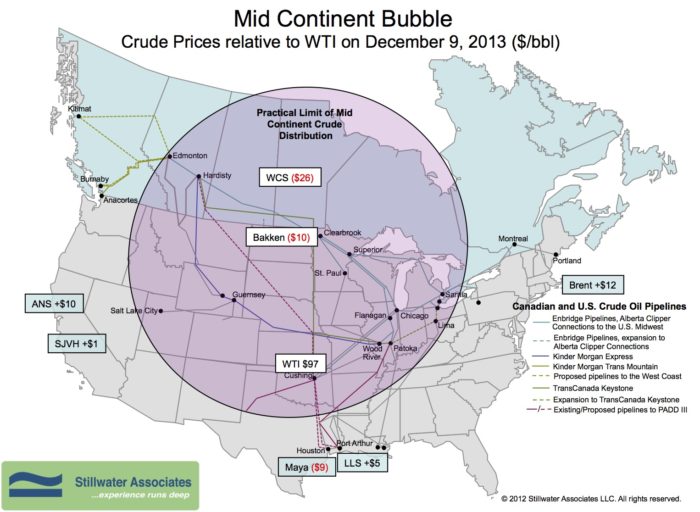 The last Bubble Map of the year shows the Bakken discount has narrowed since we last checked in. On December 9th, Bakken at Clearbrook, MN was posted at $10 under WTI. But the WCS discount has widened to $26. Maya remains at $9 under WTI. The Brent, Louisiana Light Sweet and Alaska North Slope differentials have all widened as well. Brent was priced $12 over WTI, LLS $5 over and ANS has gained a whopping $8 since October to $10 over WTI. San Joaquin Valley Heavy gained ground as well to $1 over WTI. Mexican Maya remains at $9 under WTI.*

The question lately is, what’s going on with ANS? The ANS premium to WTI reached a high of $15 at the end of November. It has since fallen this week due to increased production, but still remains historically high. At Stillwater we’ve had some lengthy discussions about whether or not Bakken is backing out ANS on the West Coast. The consensus is with four new crude-by-rail terminals on the West Coast with a combined 106 KBD of capacity for receiving Bakken, there is little reason for refiners to run something that’s priced in the same neighborhood as Brent. Recently ConocoPhillips announced the possibility of exporting ANS to Asia if the differential between Asian and U.S. West Coast prices is favorable. The U.S. restricts exports of crude oil, with few exceptions including exports of ANS and exports to Canada.

*As always, a big thanks to Bloomberg and OPIS for the spot prices.