The California Oil Spill – What’s Next?

We here in Southern California are experiencing our first significant offshore oil spill in some time. It now appears that crude oil, estimated to be about 600 barrels (or about 25,000 gallons), escaped from a fracture in the San Pedro Bay Pipeline which connects Outer Continental Shelf (OCS) Platform Elly to Long Beach. Investigations and surveys continue during the cleanup efforts, after which we should know the range of the spill which may include the OCS.

The Bureau of Ocean Energy Management (BOEM) offers maps like the one below to help visualize the location of the Platforms and paint a 10,000-foot picture of what many of us are seeing out of our windows and in the ocean and up and down the California coast.

We have enlarged the portion of the above map including coastal southern Los Angeles County and northern Orange County to make it more legible. That enlargement is displayed below. 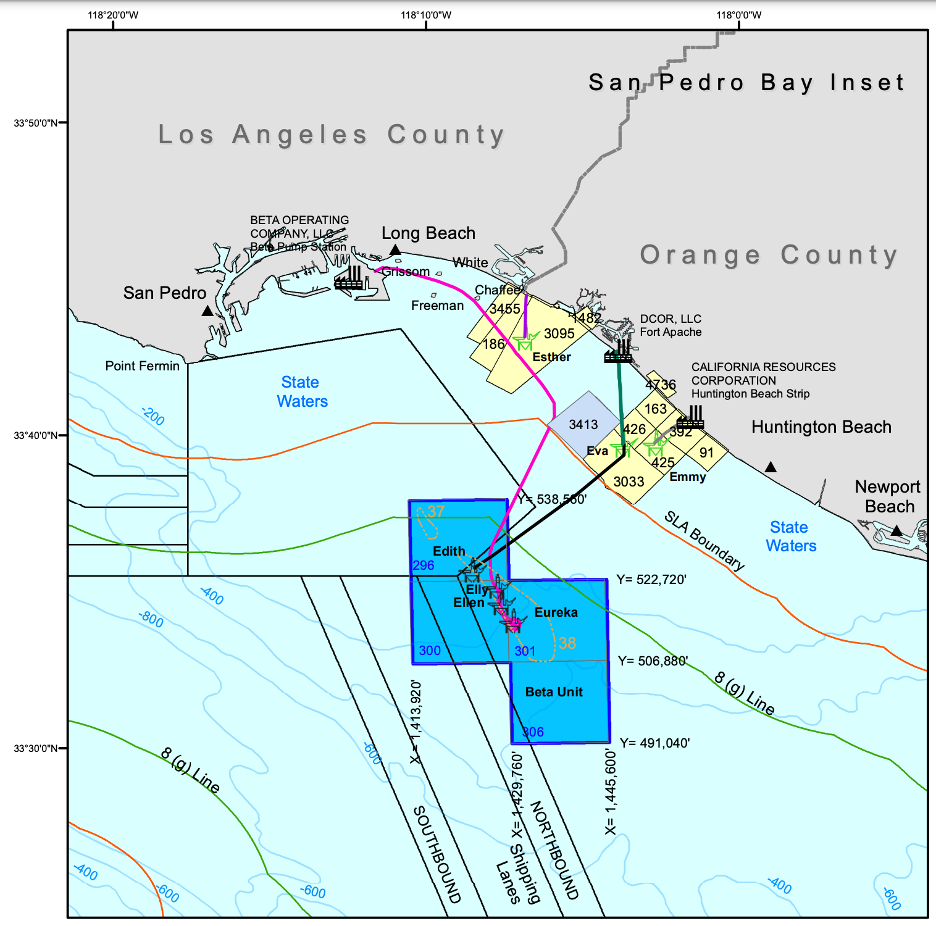 As can be seen, Platform Elly is located inside of the dark blue shaded area with the San Pedro Pipeline in dark magenta leading from Elly to Long Beach. Inshore from the Platform you will find the SLA Boundary line in red, three nautical miles from the coast. Landward from this red line are “State Waters” where California State platforms reside, and seaward of the red SLA Boundary line is the OCS where the U.S. OCS platforms reside. California State Platforms Eva, Emmy, and Esther are displayed in yellow, north of Platform Elly and south of the four Oil Islands (Grissom, White, Freeman, and Chafee). The OCS Platforms and additional platform information are displayed below in the enlarged Santa Barbara County and Ventura County portion of the larger map. 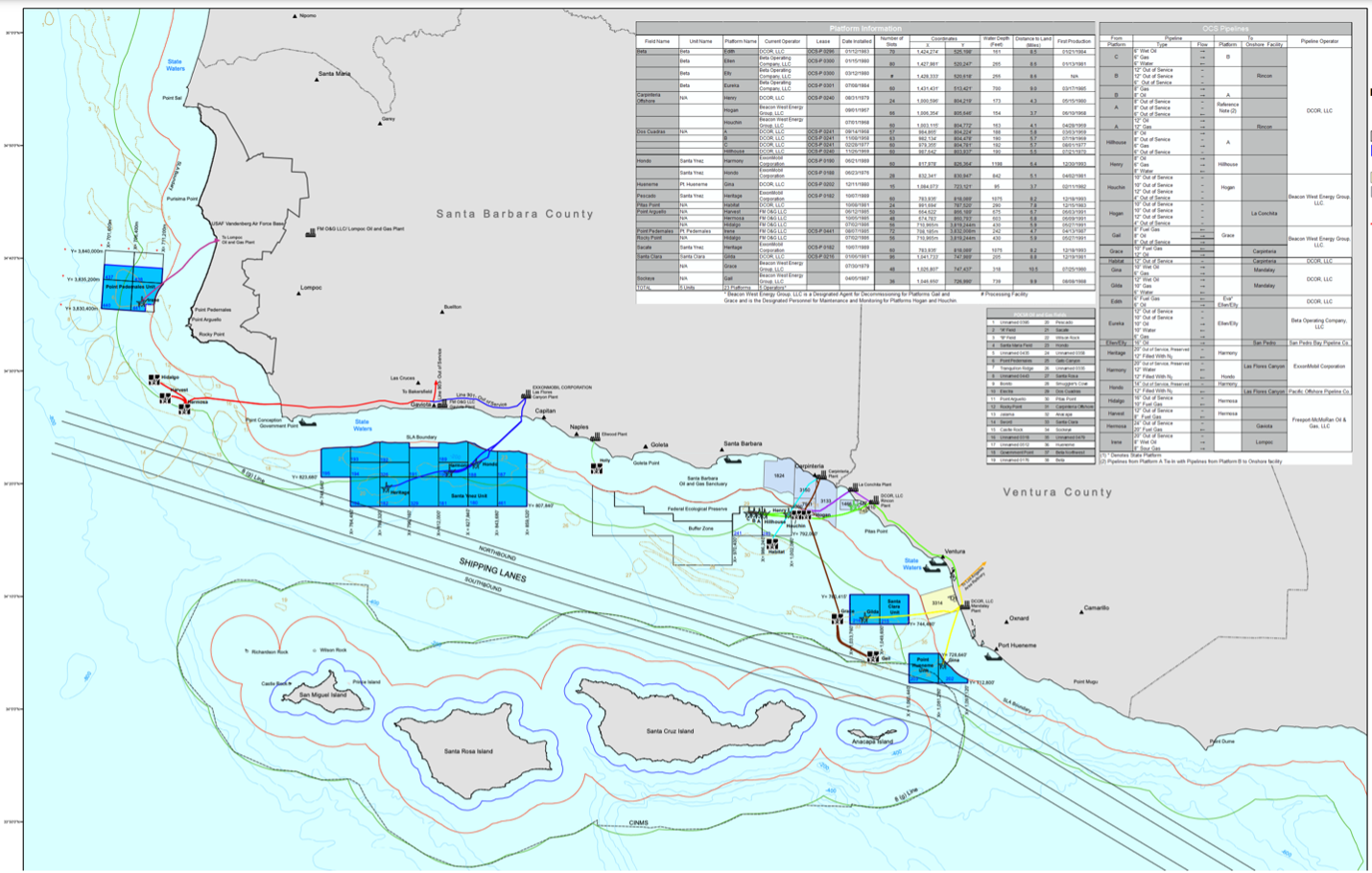 As the cleanup continues, and oil production from OCS Platform Elly has ceased, we wonder: “What’s next for the other California and OCS Platforms and the crude oil they produce?”

The long-term trend for both offshore and onshore California oil production is downward. This oil spill can only accelerate the downward offshore trend and perhaps onshore as well. Let’s descend from our 10,000 ft. perspective and consider the factors likely to accelerate this decline:

It remains to be determined, of course, the extent to which these risks will accelerate the decline in oil production from offshore platforms or even onshore production. Without question, however, oil producers in California currently operate in an environment which may in time reduce domestic oil production to the point where significantly more crude oil or refined products are imported into California, likely by ship, to replace lost regional pipeline supply.

If the supply of crude oil from offshore platforms stops, how and where would it need to be replaced?

In the absence of individual oil platform production data, we are still able to identify (from the BOEM map) the locations of producing offshore oil platforms and islands where crude oil would have to be replaced should their oil production stop. The producing OCS crude oil platforms are located in four major geographic areas of Coastal California:

Having identified where the offshore oil production islands and oil platforms are located, we can now consider the regional challenges to be faced in replacing their product should their crude oil production stop.

Potential lost supply from Rincon and nearby Carpinteria could not be replaced by ship or barge due to their distance from a harbor with a marine oil terminal. The crude oil from OCS platforms has historically come ashore there and been trucked to the Santa Maria refinery or injected into the Coastal pipeline system for some of the LA refineries; in either case it could not be easily replaced via vessel as there are no berths in these locations.

Crude oil from Mandalay goes by pipeline to serve Los Angeles refineries, so if that production were to be lost, it could possibly be replaced by an oil tanker delivering crude oil to Long Beach. That option carries the unfortunate downside of potentially exacerbating the crude oil berth congestion currently observed in LA and Long Beach.

All other crude oil losses from offshore, OCS, and state of California oil platforms and islands might possibly be replaced by supplies of crude from the nearby port, but that is not certain. Marine crude oil berth congestion along with other pipeline and storage limitations and issues would have to be carefully studied to determine the viability of this option for each replacement crude oil receiver.

In all cases, replacing lost crude oil supply from oil platforms in kind and in place by onshore production may offer the lowest cost alternative supply. But with state oil production also in decline, this may not be a viable option. Removing and replacing OCS and California state crude oil production with foreign production or distant U.S. production can only increase the price of that oil, given the added transportation costs.

In simple terms, every 400,000 barrels of local production decline means another vessel from someplace far away and, potentially, even more ships waiting offshore in the queue.

None of us knows for sure what is next for oil in California. Risks to its production are always present but may be more imminent during an oil spill. We hope you are now able to better visualize the potential impacts of the recent oil spill on the California oil industry.