There are three major refining centers on the West Coast, the Pacific Northwest (PNW), the San Francisco Bay (SFB), and Los Angeles (LA). The refineries in the PNW supply Washington, Oregon and California with gasoline. The SFB plants supply Northern California, Northern Nevada and Southern California with gasoline. Excess gasoline from the PNW and SFB is tankered to LA because there are no connecting pipelines.

The LA refineries supply product to Southern California, Southern Nevada and Arizona. Normally the PNW and SFB are long on gasoline and LA is short. Gasoline is routinely exported to Canada, Mexico and Central America from the northern refineries.

The Southern California gasoline market has been especially volatile this year. The graph below shows the spot price for California Blendstock for Oxygenate Blending (CARBOB) for the Los Angeles and San Francisco markets, relative to the New York Mercantile Exchange (NYMEX) price. 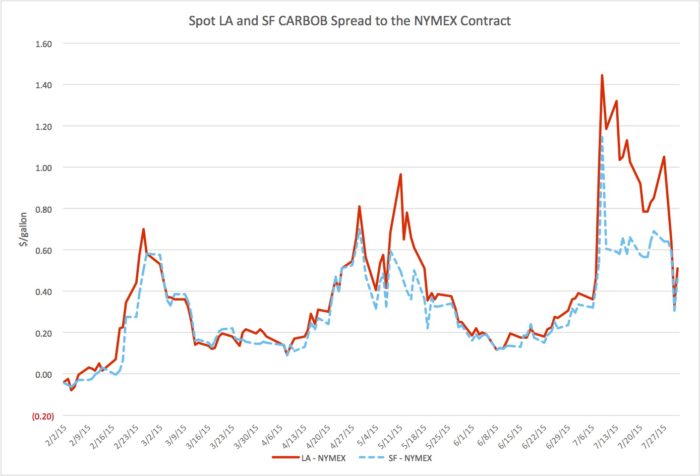 When the market is well supplied, the spread between the California markets and the NYMEX ranges from -10 to +10 cents per gallon. The market has not seen these levels since mid-February.

In mid-February, the ExxonMobil Torrance refinery suffered an explosion taking the plant offline. Torrance produces nearly 20% of the gasoline supply in Southern California. The LA market became much shorter than normal.

The resulting price spike dissipated within a month as tankers began to arrive from around the world, including Belgium, Canada, Finland, France, Italy, India, Japan, Korea, Mexico, Netherlands, Russia, Singapore, Sweden, Taiwan and the United Kingdom. The graph below shows the industry’s reaction to the strong price signal. 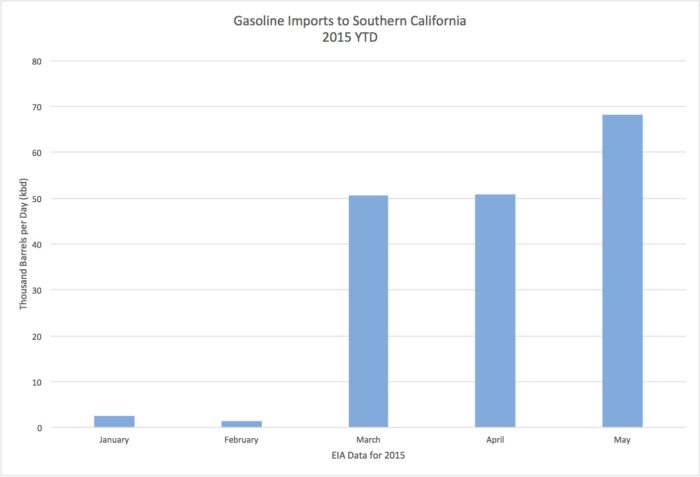 In late April, other refining problems arose, as evidenced by the next set of price spikes. Note that the San Francisco market did not react as strongly as the LA market.

In early July, LA spot prices once again rose dramatically. The market remained volatile for nearly two weeks with large daily swings. San Francisco spot prices spiked initially but fell quickly. Clearly the problems were focused in LA. The big question is, what caused this run up of spot prices?

There seem to be three factors causing the price spike. The first was the very limited availability of U.S. Flag tankers and barges to move products from the PNW and SFB to LA. When problems occur in LA there are no spare vessels to load gasoline in the SFB to transport south. Shippers cannot use foreign flag tankers to move cargo between one U.S. port and another. A clear source of supply should be the refining center on the U.S. Gulf Coast, but no spare U.S. Flag shipping was available to move gasoline to Southern California, as near as we can tell.

Second, inventories of gasoline in LA were at low relative levels in early July, as shown in the graph below. 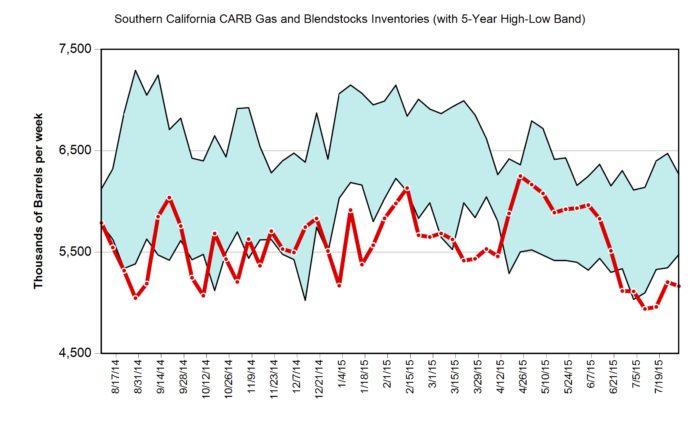 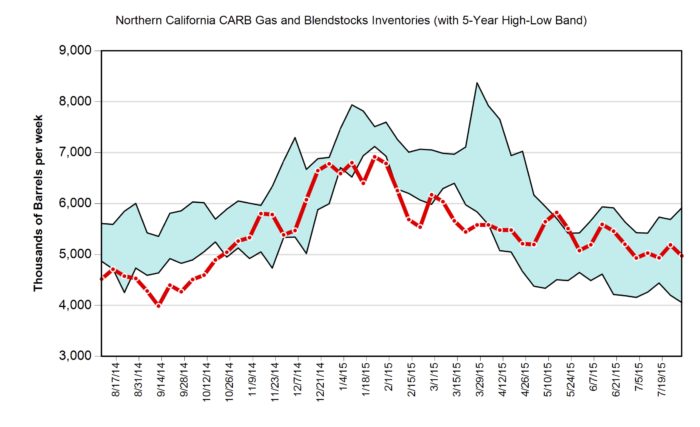 By late June, there was sufficient gasoline in the north and shortages in the south, consistent with the divergence in spot market pricing. This corroborates the theory that there was a lack of shipping capacity to move extra volume between the markets.

Third, we note the commentary in the market about tanker traffic to Southern California slowing in June. While the officially reported data on imports (and exports) lags by months, it is consistent with the drawdown of Southern California inventories that begins in early June. We also note that through the second quarter market observers continued to guess that the Torrance refinery would finish its repairs and get back online by July. It is possible that market participants decided it would not be economical to bring tankers to LA because the shortage would disappear if the refinery restarted.

So how has this impacted retail prices? According to the Energy Information Administration’s (EIA) data, retail prices reacted strongly to the spot price move. LA prices rose from $3.53 per gallon on July 6 to $4.03 per gallon a week later. Prices are now falling as the spot market continues to decline. 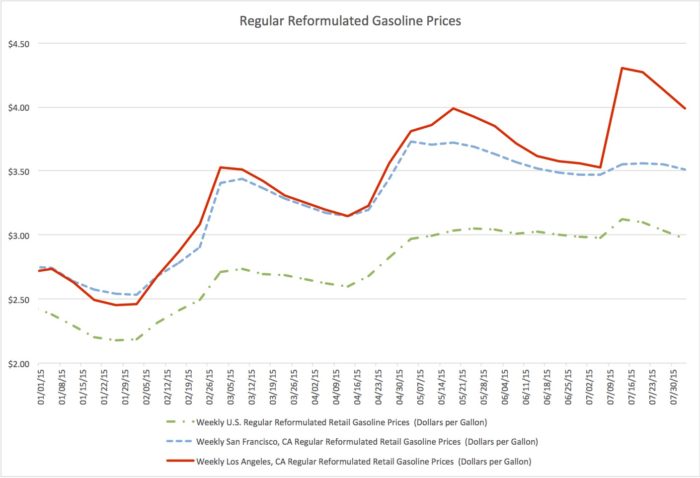 According to comments made during ExxonMobil’s latest analyst call, the Torrance refinery is not likely to be back online soon. Since a large percentage of the supply of gasoline to Southern California is dependent on tankers, it will be important for market participants to keep the flow of ships coming from abroad. Regulations make it unlikely that any additional tanker capacity will be added to the north/south routes.

The good news is that refiners are increasing gasoline production levels as the CEC charts show below. 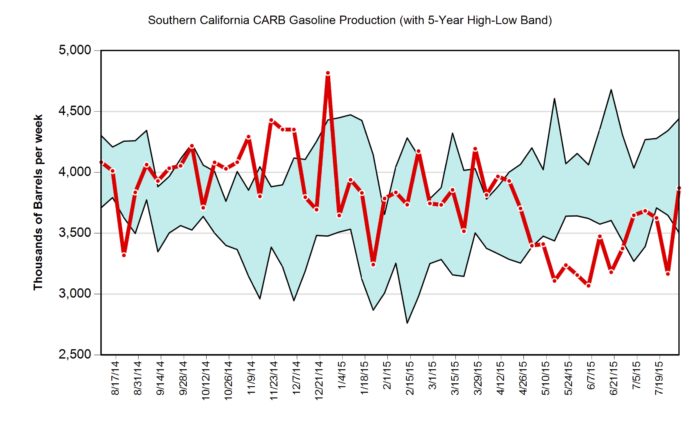 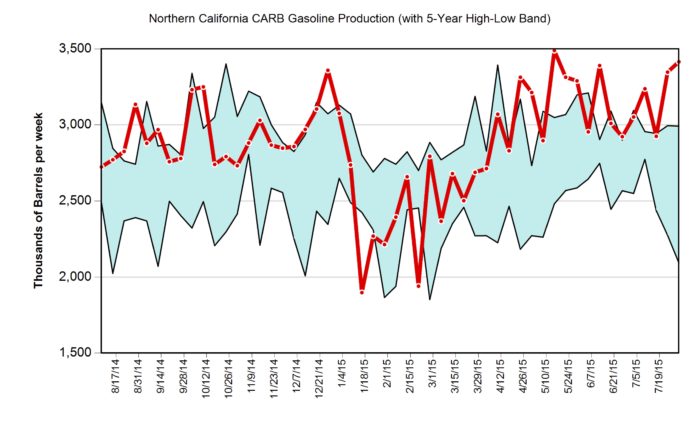 Finally, there were unsubstantiated reports of foreign-flagged tankers departing Southern California loaded with gasoline in the late June – early July timeframe. Stillwater investigated those reports and determined the ships departed empty. They probably delivered cargos of gasoline or jet fuel into LA and then departed to find new cargos in other ports.

1Published with permission of the California Energy Commission.