The press has been buzzing with gasoline price stories since the ExxonMobil Torrance refinery suffered an explosion last week, limiting the amount of gasoline it produces. Indeed retail prices are suddenly 25% higher. Using the EIA’s weekly retail price data, the chart below shows retail gasoline prices in Los Angeles bottomed the beginning of February and have increased 63 cents per gallon (cpg) as of Monday, February 23rd. 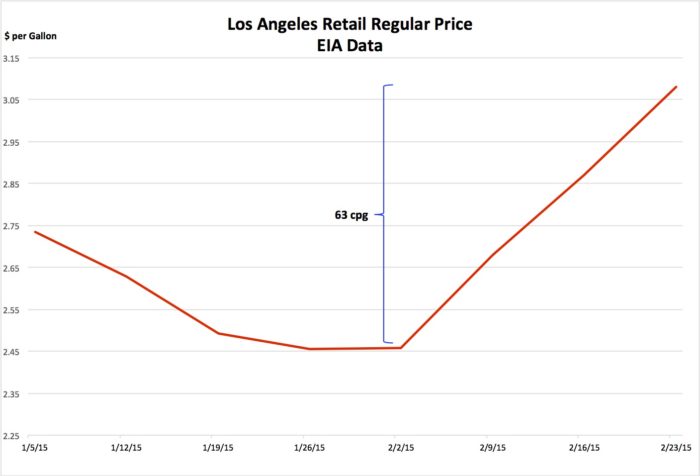 What accounts for this rise in prices? In our view, there are a number of factors. First, West Texas Intermediate (WTI) crude oil prices bottomed in mid-January at about $44 per barrel. Since then crude prices have increased to the low $50-range and remain volatile. A crude oil price increase of $6-$8 per barrel shows up in the retail gasoline price, which is only about 15-20 cpg.

Back in January, we wrote that the start of the California “carbon tax” (the Fuels Under the Cap program) had little impact on retail prices because the market was amply supplied and retail prices were low. Now the spot gasoline market is tighter and we postulate the full impact of the 10 cpg tax is being felt.

Even before the February 18th accident at the ExxonMobil Torrance refinery, the trade press had been reporting refinery maintenance issues. Some of the retail price rise could be related to those issues. In addition to refinery maintenance issues, market observers have commented that the steelworkers strike at some refineries is making market participants nervous. This could lead to higher spot prices, in anticipation of further refinery problems.

Bottom line: retail prices are way up, but most of this increase can be explained by increases in crude oil, changes to summer grade gasoline and the application of the carbon tax.