The California Air Resources Board (CARB) has a long and proud history of ambitious reductions to air pollution which CARB deems necessary to meet ambient air quality standards. Continuing this 50-year trend, CARB is considering reducing its heavy-duty vehicles’ nitrogen oxides (NOx) standard by 90%. This new NOx standard[1] would require extensive and expensive engine (and perhaps fuel quality) changes and would increase fuel use and CO2 emissions. Additionally, CARB is mandating more zero-emission vehicles (ZEVs) due, in part, to their claimed lower volatile organic compounds (VOC)[2] and NOx emissions. Historically, NOx-reduction measures increase fuel use by 2-5% as NOx reduction requires lowering combustion temperatures though higher combustion temperatures yield the greatest engine efficiency. A 5% increase in fuel use represents a one-billion-gallon increase in fuel use in California. This increase in fuel usage raises Californians’ transportation costs for the purpose of reducing ozone violations. So, what are the ozone reduction benefits from greater NOx control?

NOx sometimes promotes and sometimes reduces ozone formation depending on the abundance of VOC and NOx in the atmosphere. History tells us that past NOx reductions were not a significant aid in reducing state-wide ozone violations. In fact, Stillwater’s analysis finds that the NOx-reduction policy has delayed ozone attainment in California. Let’s explore why that’s the case.

In 1998, the proposed Low Emission Vehicle regulations, which aimed to reduce emissions (including NOx) from motor vehicles, were debated. Public testimony justified deleting the NOx-reduction standard based on the observation that Southern California ozone violations were increasing on weekends despite the lower weekend NOx emissions. At that time, the Air Resources Board directed CARB Staff to investigate the scientific evidence related to the ozone weekend effect and evaluate its implications concerning NOx reductions as an ozone-control strategy. This investigation resulted in nine technical articles published in the peer-reviewed Journal of the Air Waste and Management Association. The accepted findings were that NOx emissions were declining 25-45% every Saturday and Sunday, but average ozone levels increased 28-50% respectively during the 1990s. This finding ran contrary to CARB’s intended outcome. CARB agreed that NOx reduction was likely a major factor but also cited “currently available data do not provide unambiguous evidence that the ozone weekend effect is primarily a consequence of NOx reductions or representative of changes that might be anticipated with regulatory reductions in NOx.”[3] Given this approach, CARB proceeded undeterred with NOx-reduction policies. What resulted is not entirely surprising given what atmospheric scientists forewarned.

How are VOC, NOx, and Ozone Interconnected?
The atmosphere reacts to VOC and NOx pollutants which, on hot sunny days, can form ground-level ozone (also called smog). Conversely, NOx pollutants can also remove ozone from the atmosphere. This nonlinear ozone formation/scavenging is the complexity that scientists and policymakers have debated for decades. Ozone levels greater than health-based standards can cause upper respiratory harm to sensitive groups, especially the young and elderly. High ozone levels have also been found to damage crops and reduce crop yields. Consequently, CARB and the U.S. Environmental Protection Agency (EPA) view ozone pollution as an urgent and significant health risk. Over time, these agencies have adopted four ever-increasing ozone stringency levels to protect people and crops.

Figure 1 shows the successful reduction in ozone violation days resulting from past emission-reduction policies. Ozone pollution levels, as measured in ozone violation days above all four emissions standards have been dropping in the Los Angeles, South Coast Air Basin since the mid-1970s thanks to industry and air quality agencies working to reduce VOC and NOx emissions. The question remains: Was previous ozone violation reduction success a result of NOx reduction, VOC reduction, or both? Historically, there has been great debate between industry, scientists, and policymakers. Reexamining the empirical evidence suggests past NOx controls have delayed ozone attainment consistent with the Journal of the Air Waste and Management Association scientific papers published back in 2003. 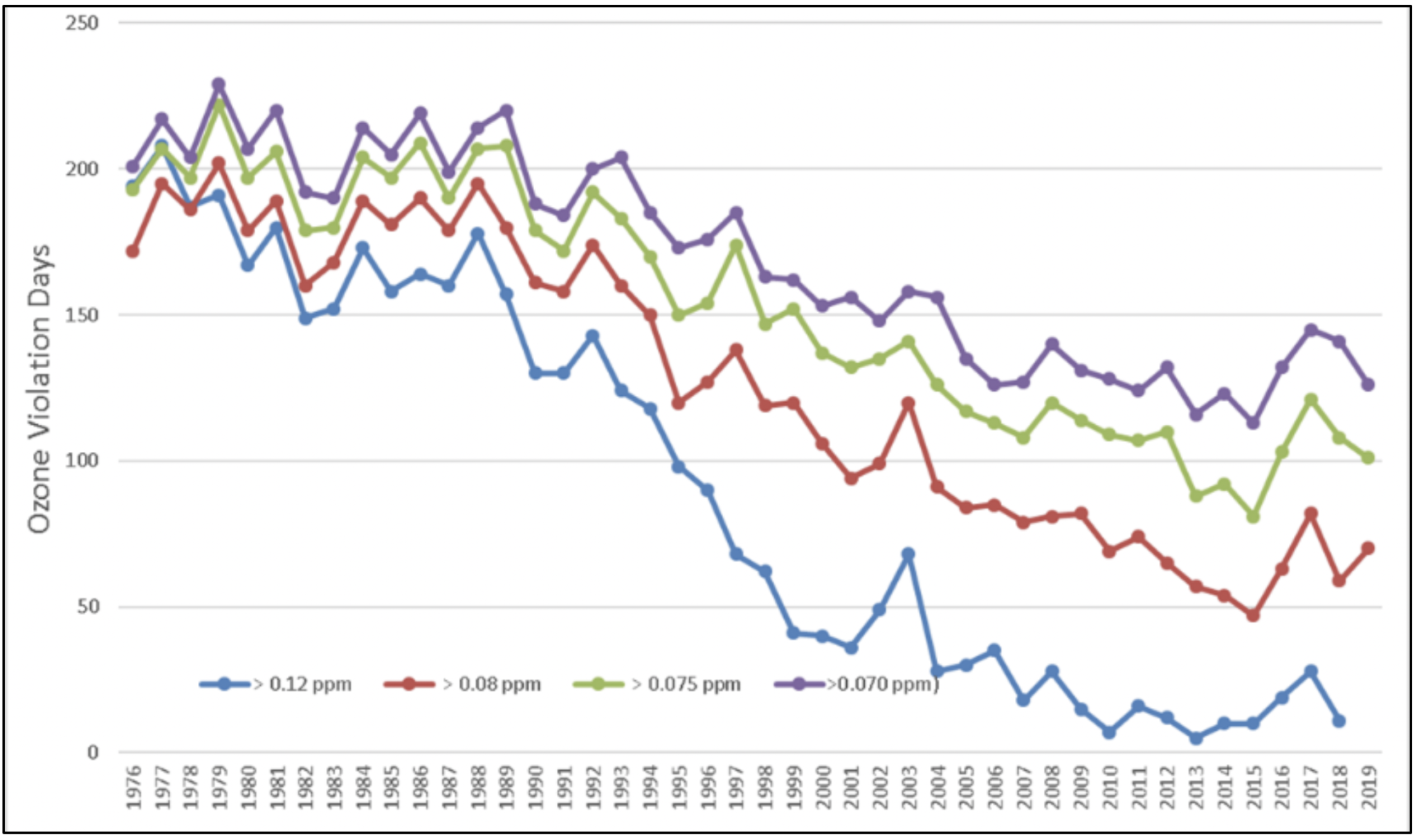 Note that ozone violations started to reverse their downward trend and are increasing over the last four to five years. This ozone trend reversal and ozone attainment delay was forewarned by the atmospheric scientists involved in the coordinated Weekend Weekday Ozone research effort in 2003 studying the ozone formation in the 1990s. The authors found that Los Angeles (LA) was generally a VOC-limited air basin, meaning ozone formation is only dependent on VOC and not NOx. In a VOC-limited air basin like LA, reducing NOx tends to increase ozone. Reducing NOx in a NOx-limited air basin, however, tends to lower ozone. In LA, as the Weekend Weekday Ozone research effort showed, NOx reduction was leading to the higher ozone levels observed on Saturday and Sundays. Furthermore, several of the scientists warned that continuing the current policy of aggressive NOx reduction would delay ozone attainment.[4] In fact, as we discuss below, the recent increase in ozone formation may mean that attainment is now unachievable, not just delayed.

Figure 2 highlights the maximum ozone violation reduction progress in the 1990s – a period in which twice the VOC pollution reduction occurred compared to NOx reductions. The trendline suggests that LA would reach attainment of the 0.12 parts per million (ppm) ozone standard by 2004 had the strong VOC reduction policies of the 1990s been maintained. Instead, CARB pursued more aggressive NOx reductions based on air quality modeling that suggested it would further reduce ozone violation days. As shown in Figure 2, the atmospheric reaction to these more aggressive NOx reduction policies implemented after 2000 resulted in a slowdown to the remarkable ozone reduction seen in the 1990s, delaying ozone attainment by over 15-years. 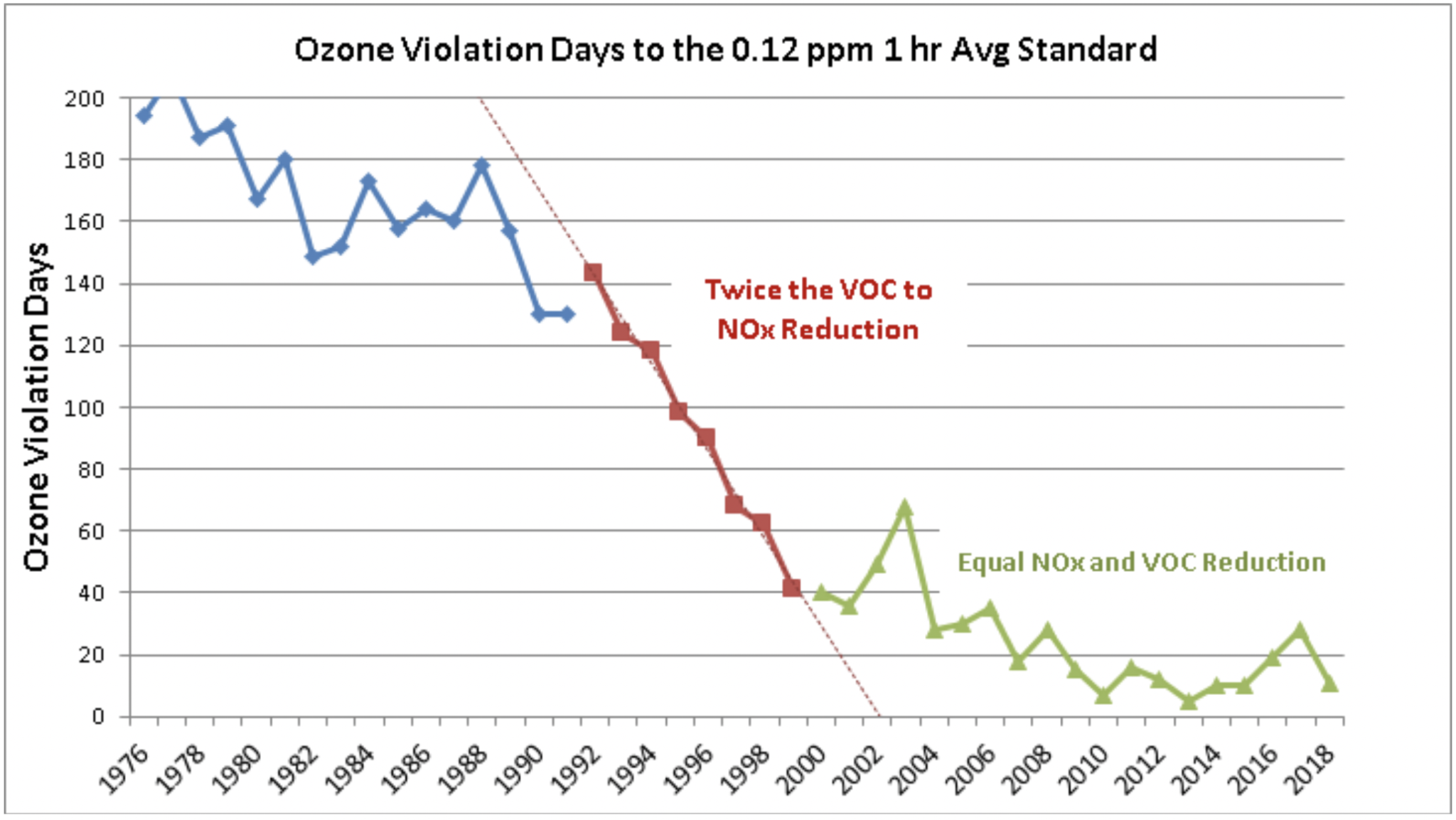 This ozone attainment delay is observed for all four ozone standards. In Figure 3, the green lines show the maximum ozone violation reduction trend during the greater VOC reduction period. The red lines show the ozone reduction progress in the greater NOx reduction periods. The empirical evidence suggests that if CARB had maintained the more aggressive 1990 VOC reduction policy but a significantly milder NOx reduction policy through the 2000s, today LA likely would have achieved ozone attainment under three of the four ozone standards by now instead of none.

Will ZEVs Help Ozone Reduction Progress?
Perplexingly, ozone increased as a result of California’s economic recession as gasoline and diesel were reduced up to two billion gallons from 2008 to 2014. CARB cites transportation fuel use is responsible for 90% of ozone-forming gases. Yet, when California sales reduced by two billion gallons, (reducing gasoline usage by 11% and diesel by 20%), ozone levels actually increased. A two-billion-gallon reduction in gasoline and diesel usage is equivalent to a statewide transition of 5.7 million light-duty vehicles to ZEVs and 80,000 heavy-duty vehicles to ZEVs all fully recharged by power generated from renewable sources – solar or wind. California’s State Implementation Plan (SIP), which outlines for EPA the state’s plan to achieve ozone attainment, relies heavily upon ZEVs’ NOx reduction for ozone attainment. The seven years of increased ozone observed during a period of reduced fuel use equivalent to ZEV migration raises uncertainty about ZEVs as a reasonable SIP option. Figure 4 shows the ozone violations to the 2015 ozone standard prior to and during the recession. Fuel sales dropped significantly from 2008 to 2014, consistent with the step-up in ozone violations for at least eight years and then diverging from the past reduction trend for the last four years. 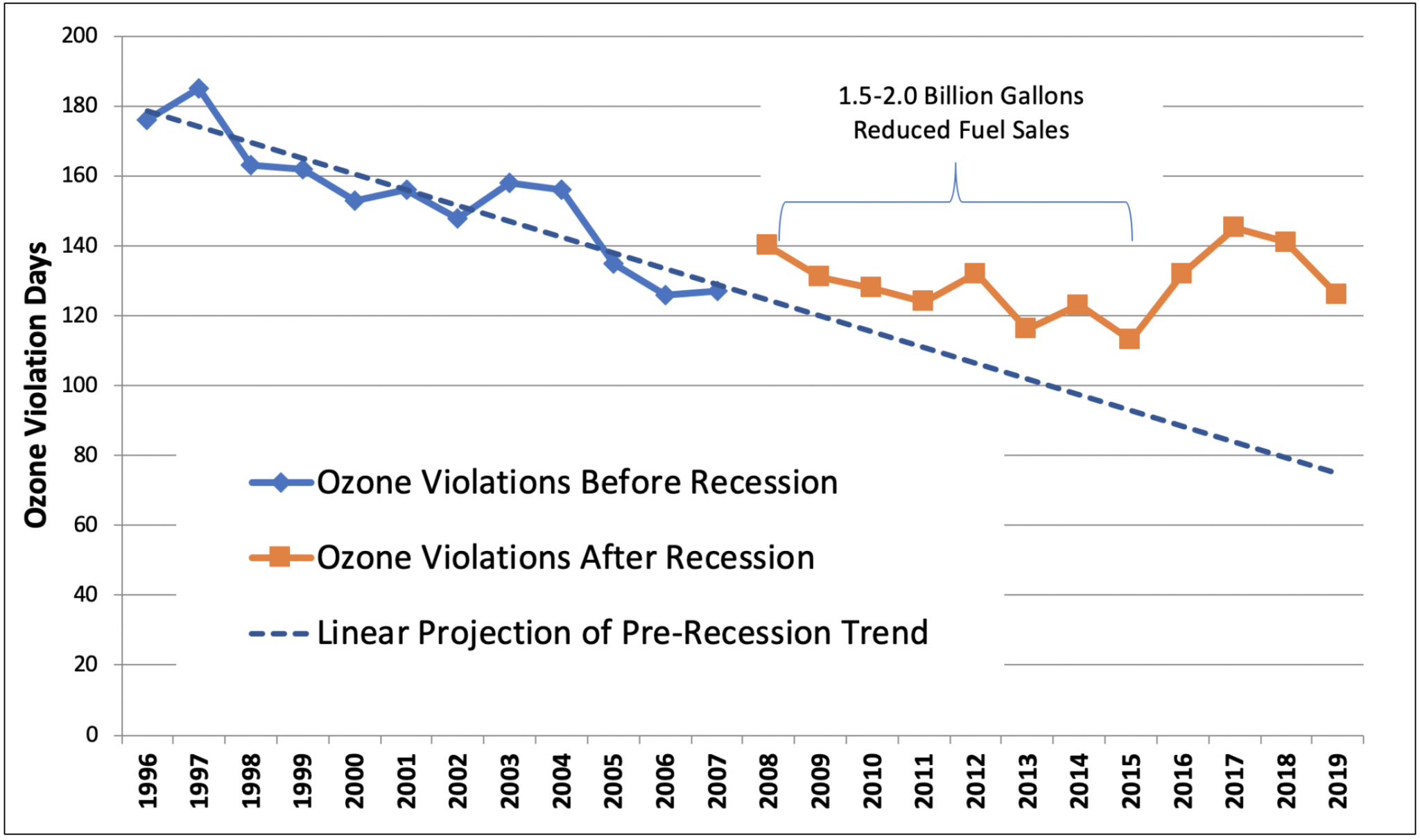 Figure 5 displays annual LA ozone violation days to the 2015 ozone standard divided by gallons of gasoline and diesel fuel sales for the same period, revealing the continued counterintuitive ozone trend. Ozone violation days went up when fuel demand went down. The standard environmental policy assumption is that reduced transportation fuel use (and its associated pollution) would lower (not increase) ozone levels.

Conclusion
In the 1990s, thanks to a strong VOC-reduction policy and industry efforts, California made significant ozone reduction progress. In the 2000s, however, environmental policy shifted to a strong NOx reduction policy. Since then, California has not attained ozone compliance with any ozone standard. California has 15 years of empirical evidence that implicates the strong NOx reduction policy for delaying ozone attainment relative to the performance observed in the 1990s. This finding is consistent with the Weekend-Weekday Ozone study’s published papers. These papers quantified the increased ozone levels in Los Angeles on weekends even though NOx levels are decreased due to the reduction of heavy-duty truck traffic on weekends.  Recent ozone increases, perhaps related to the migration of 2010 low-NOx heavy-duty diesel engines, also suggest that the atmosphere is behaving as a VOC-limited air basin resulting in increased ozone when NOx reduction is too great. Furthermore, two billion gallons in reduced transportation fuel use was found to increase ozone levels, raising uncertainty about ZEVs ozone reduction benefits, due mostly to NOx reductions.

The reason for these confounding findings is that the ozone formation equation (VOC + NOx = Ozone) is reversible. The result is that under certain atmospheric conditions NOx can act as a scavenger of ozone. Under these conditions, increased NOx causes ozone reductions rather than increases. This leads to the conclusion that while some ozone non-attainment areas may benefit from NOx reductions while other areas may see ozone increases in conjunction with NOx reductions.

It appears that the atmospheric scientists’ conclusion in 2003 – that CARB’s policy seeking aggressive NOx reduction would delay ozone attainment – was correct. Regardless, all Californians pay for the aggressive NOx reduction standards in the form of health consequences, higher electricity and vehicle cost, and increased fuel use (which result in greater CO2 emissions).

What’s next?
If the current policies aren’t achieving the desired outcomes, what should be done differently? Stillwater offers four suggestions:

This analysis is a work in progress.

Stillwater continues to seek comments from policymakers, air pollution experts, atmospheric scientists,
and industry participants regarding possible improvements to our assessment of this issue.

We welcome feedback, and Stillwater stands ready to work with clients on projects and analytical work around these issues.
As always, we will continue to publish articles around our thinking as we incorporate new information.

[2] Also referred to as Hydrocarbon (HC), and non-methane hydrocarbons (NMHCs)