Bubble Map Update: The Crude-by-Rail “Arb” to California is Closed

August 6, 2015 By Megan Wisdom from the Downstream Wizard 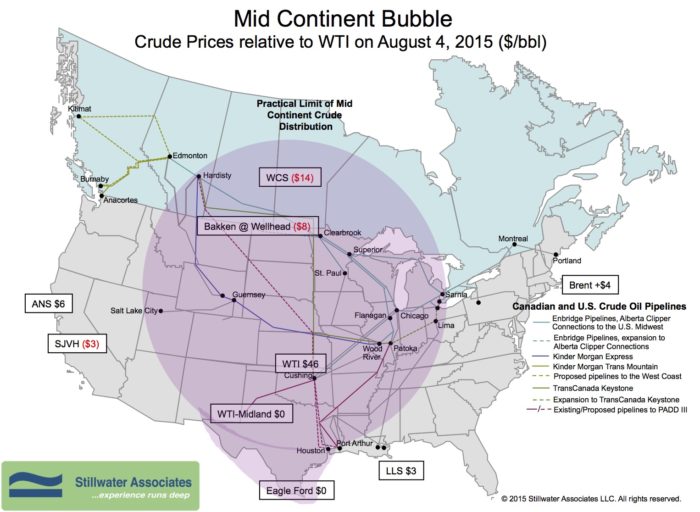 The August Bubble Map shows crude oil prices trending down since we last checked in at the end of June. WTI is down $7 since our last post at $46 per barrel on August 4th. The WTI/Brent differential has widened slightly to $4 over WTI. The Bakken discount has narrowed to $8 under WTI. The Western Canadian Select discount has widened to $14 under WTI. On the Gulf Coast, crude oil from the shale formations in Texas like Eagle Ford were priced at parity with WTI and Louisiana Light Sweet was $3 over WTI. On the West Coast, the San Joaquin Valley Heavy price was at a $3 discount to WTI. The Alaska North Slope differential was $6 over WTI on August 4th.

The dip in crude oil prices has made shipping crude-by-rail (CBR) less economical than it was at the peak of the CBR boom in 2012. In fact, according to the California Energy Commission, CBR shipments to California have dropped significantly since June of 2014, from about 19 thousand barrels per day (kbd) to about 5 kbd in June 2015. In 2014 CBR shipments to California arrived from a number of shale-producing regions, with the bulk coming from Canada and North Dakota. In 2015, imports from the Midcontinent have only come from New Mexico, Utah and Wyoming. In trading parlance, “the arb to California is closed.”