Supply to the East Coast is a complex mixture of local refineries, large pipeline movements from Texas and Louisiana and water shipments both barge and large ships.  The U.S. Energy Information Agency (EIA) divides the U.S. into five regions or PADDs (Petroleum Administration for Defense Districts) as shown in Figure 1.  The East Coast is represented by PADD 1. 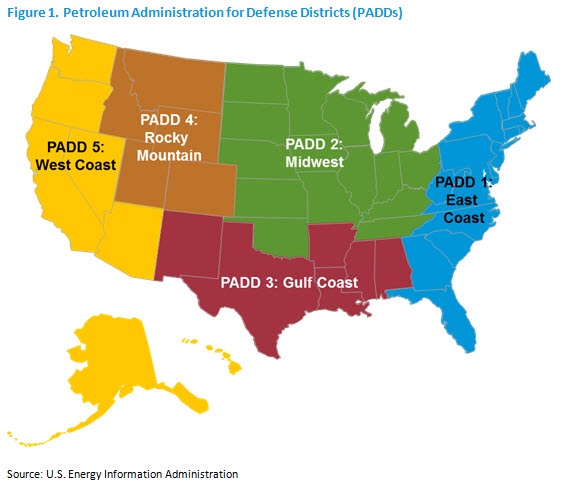 As can be seen in Figure 2, the East Coast has much greater demand for refined products than it has refinery capability to produce those products.  Even the small number of refiners are predominantly in one part of the region, while other parts of PADD 1 have no refining capacity at all.  Colonial Pipeline the largest U.S. pipeline, moves great volumes of gasoline and diesel fuel from Texas and Louisiana refineries. Plantation Pipeline also plays a major role in supplying the Southeast coast with products. These pipelines move light products into Georgia and then up the coast to New York. The gasolines moved are Southern reformulated gasoline (RFG), Northern RFG, conventional blendstock for oxygenate blending (BOB) and low reid vapor pressure (RVP) BOB. 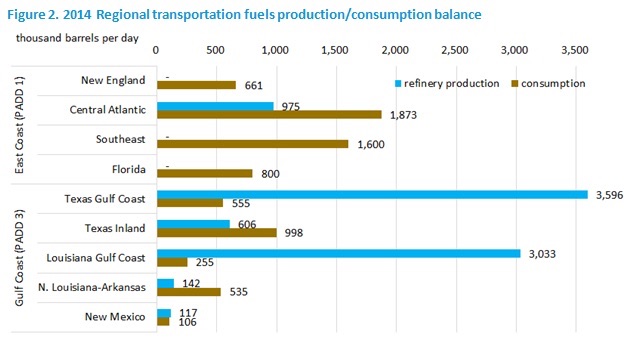 The East Coast falls short of product supply even with the large pipeline movements and local refining capacity. This shortfall is taken care of by the importation of products mainly from Europe and mainly into the New York area.

New England consumes about 660,000 barrels per day (bpd) of transportation fuels. There are only small local pipelines and most of the supply comes by tanker or barge which are supplemented on occasion by truck and train. New England is one of the few areas of the country with significant but decreasing demand for heating oil.  New England also gets some of its supply from Canada.

The Mid-Atlantic region consumes about 1.9 million bpd of transportation fuels. It contains the two major supply hubs in the U.S.: New York and the Philadelphia area. Supply comes from pipelines, local refineries, and by ship. In the last few years the U.S. East Coast imported just below 500,000 bpd of gasoline blending components.

The Southeast region consumes 1.6 million bpd of transportation fuels. With no refining capacity, the Southeast is supplied almost entirely by pipeline with a very small amount supplied by ship on the coastline.

Florida is uniquely supplied by barges on the Gulf side and by ship on the Atlantic side. Florida consumes about 800,000 bpd of transportation fuels. Other than one small pipeline in the middle of the state, which moves products from the west coast of Florida to the east coast, Florida has no pipelines and relies solely on water movements and trucks to distribute their products.