The chart below illustrates the flow of petroleum products in and out of the U.S. by Petroleum for Administration of Defense District (PADD) for 2014. The red gasoline (G) arrows represent flows for gasoline, motor gasoline blending components and fuel ethanol. The blue diesel (D) arrows represent flows for biomass-based diesel (biodiesel), renewable diesel, distillate fuel oil (diesel fuel and heating oil) and jet fuel. The data and PADD map are provided by the EIA. 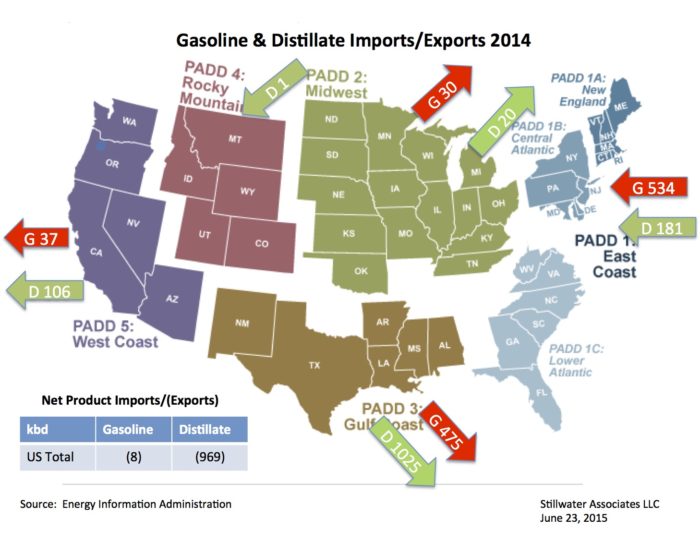 Starting with the East Coast (PADD 1) you see that gasoline imports were more than 500 thousand barrels per day (kbd), while distillate imports were 181 kbd. The East Coast is an import center because fuel demand exceeds the amount of fuel produced locally or moved from the Gulf Coast or Midwest. Most of the products are brought in by tanker in from Europe.

The PADD with the largest concentration of refining is the Gulf Coast, where gasoline exports were 475 kbd and distillate exports over a million barrels per day. Most of the PADD 3 and 5 exports go to Mexico, Central and South America.

One question stimulated by this map is, “Why is the East Coast importing 500 kbd while the Gulf Coast is exporting nearly that much?” The answer has two parts. First, pipelines that run from the Gulf Coast through the Southeast to New York Harbor are full, so cheap movement of incremental supply is not available. Second, suppliers could tanker the products up to the Northeast, but “coastwise compliant shipping” (AKA the Jones Act) is expensive. This makes it more economic to export products out of the Gulf and import them to the Northeast on cheaper foreign flag vessels.