The success of drilling technology in North America’s Mid Continent has lead to a huge increase in crude oil production. In 2010, crude oil production in North Dakota was about 310 thousand barrels per day (kbd). This year, production is expected to reach 1 million barrels per day. Light sweet crude oil from the Mid Continent is attractive to refiners because it is produced domestically and is cheaper than similar quality crude oil imported from abroad. Indeed, this low cost supply has played a key role in the survival of a number of East Coast refineries.

The increase in production has changed crude oil logistics around the U.S. To make up for the lack of pipeline capacity, producers have turned to moving crude-by-rail (CBR) from North Dakota’s Bakken field to refineries on the Atlantic, Pacific and Gulf Coasts. Rather than wait for the completion of the Keystone XL pipeline from Alberta to Cushing, Oklahoma, Canadian producers of heavy bitumen and conventional crude oils are also using CBR to move their product to market.

In the wake of the CBR boom, large numbers of new CBR loading facilities have been announced. Refiners like the optionality that CBR creates because they have flexibility to send the crude to any of their refineries. Currently, East Coast markets are getting over 500 kbd of CBR from the Midwest. Refineries in the Pacific Northwest are processing about 100 kbd of CBR. Their colleagues in the Gulf Coast get about 400 kbd.

However, many of these proposed new rail-loading facilities are being met with public resistance. As CBR movements have grown it has become clear that there are safety issues with tank cars that derail, puncture, spill and burn. The rail industry is working to address these concerns. After a fatal ethanol train accident in 2009, the industry began designing tank cars meant to carry hazardous materials to be more damage resistant. And as more weaknesses in the rail system are discovered, the industry continues to make additional improvements to prevent derailments and to design safer tank cars.

How the Great American Energy Boom is Affecting the California Market

Crude oil production in California has been on a long slow decline, but in 2013 crude oil production actually increased by about 12 kbd or 1.7 percent. Sustained high crude oil prices have provided the economic incentive for additional drilling. The increase in production is across the three reporting regions – California Onshore, California Offshore, and Federal Offshore. However, the drillers have not had much success yet with producing tight oil from the complex Monterey formation.

The oil refineries in California process about 1700 kbd of crude oil. This volume remained the same for a number of years, as refineries in California have not expanded their capacity. About a third of those barrels, 600 kbd, are produced in the state or in Federal offshore waters. Almost all the rest is delivered by oceangoing tanker, with roughly 300 kbd from Alaska and the remainder, about 800 kbd, comes from the Middle East, Asia, South America and Africa. 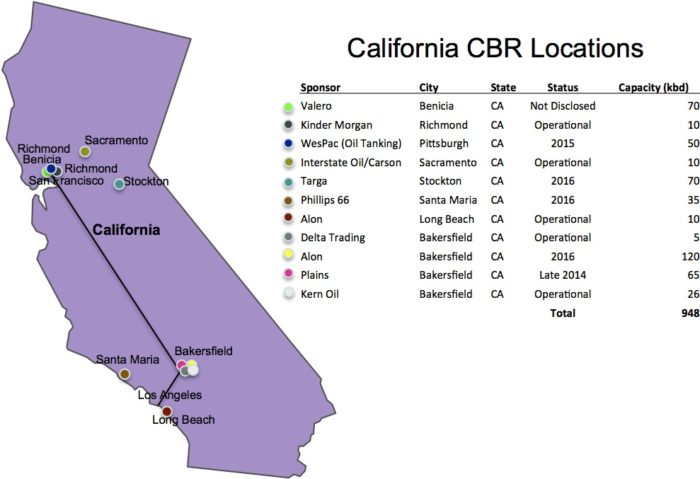 In 2013, California refineries received about 17 kbd of CBR coming from the Mid Continent. 2014 year-to-date receipts are about 16 kbd. Most of the receipts are at Bakersfield or Southern California refineries. Because low priced CBR is a small percentage of their total crude slate, California refineries have the highest cost crude slate in North America. The oil industry has a number of projects in the works to increase the receipt capacity in the state. However, many of these proposed large projects, including Valero Benicia, Oiltanking Pittsburg, Plains Bakersfield and Phillips 66 Santa Maria, are facing opposition from environmental groups.

Ethanol is also imported to California by rail. Ten percent of California’s gasoline supply is ethanol. Ethanol is blended into gasoline to meet the requirements of the federal Renewable Fuel Standard and California’s Low Carbon Standards. Most ethanol used in California is produced in the Midwest and railed to California terminals for blending with gasoline. Stillwater estimates there is some 90 kbd of ethanol moved by rail to the state. Ethanol is treated by the railroads and shippers in the same hazardous materials category as crude oil.

U.S. crude oil production is expected to increase, replacing more and more imported crude oil. Domestic producers will continue to look to move their product by rail. In order to reduce their crude costs by bringing in more Mid Continent crudes, California refiners will promote additional CBR unloading projects in the state. And to address safety concerns, the rail industry will continue to improve tank car designs and improve track safety.

The increase in crude supply in North America has replaced oil from abroad and moderated crude oil prices. If California refiners can increase the amount of affordable Mid Continent crude oil in their crude slate, consumers can expect to see more moderate prices at the pump.