What will it cost to move transportation energy to the grid?

California has big plans to reduce the use of petroleum and replace that energy with electricity. The first goal is to achieve 60% renewable energy by 2030. The next goal is to achieve 100% renewable and zero-carbon electricity while gaining carbon neutrality by 2045.  In between, in 2035 the state intends to ban the sale of new internal combustion engine (ICE) vehicles, i.e., those powered by gasoline and diesel.  Stillwater has recently written about the possible market implications of an ICE ban.  Beyond transportation energy, the state will also replace natural gas used for power generation and heating/cooking with electricity. That transition will look something like this: 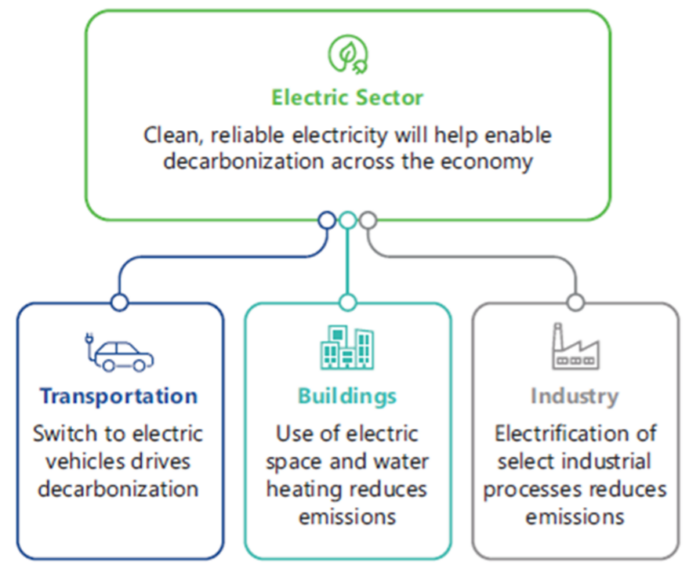 This is a big deal.  According to the U.S. Energy Information Administration (EIA), petroleum accounts for more than half of the energy consumption in California.  This begs the question: What’s it going to cost to move all the energy currently in the petroleum pipelines onto the power grid?

This certainly will be a big project, involving many state agencies, the various power companies like Pacific Gas & Electric (PG&E), Southern California Edison (SCE), San Diego Gas and Electric (SDG&E), power generating companies, the regional power grid, and the federal government. The outcome will directly impact everyone in the state. Arguably, this project has the scale of a moonshot.

The graphic below, from the California Independent System Operator (CAISO), illustrates the magnitude of the changes. In short, lots of wind, solar, and transmission lines have to be built. 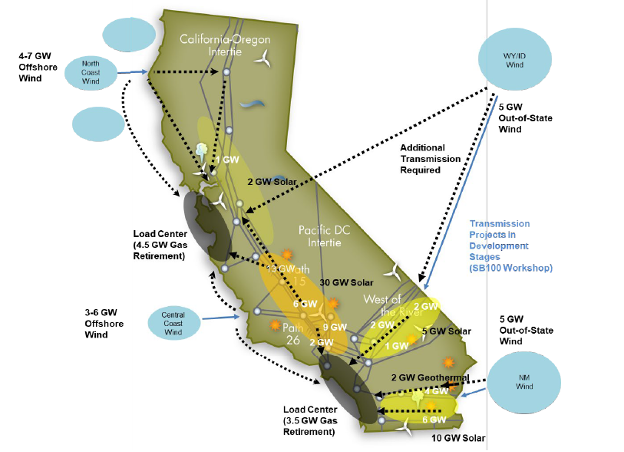 And that doesn’t count how much must be spent in distribution, i.e., to get the power from the transmission hub to your house.

SCE forecasts capacity growth by type, and we note a large growth in storage from 2019 forward. These are utility scale batteries to store the excess energy from wind and solar and shift its use to the proper time. Power generated from natural gas drops from about half the supply, but some remains in the mix to ensure reliability of power quality. The GHG emissions from these plants will be offset by carbon capture and sequestration to reach Net Zero by 2045. 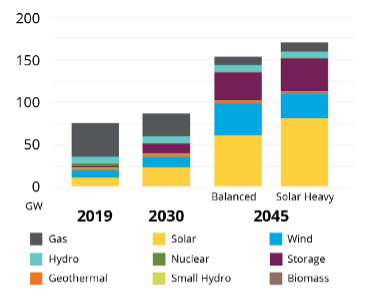 We researched the latest reports from the various stakeholders, looking to answer the question, what’s this going to cost?

The PG&E report discussed, at length, the steps the firm plans to take, including getting to Net Zero by 2040, but there was no discussion of cost. SDG&E’s report laid out how their mix would change, but again, there was no cost estimate. We were unable to find a number on the California Energy Commission’s site.

The only real estimates we could find were from CAISO and SCE. CAISO reckoned the cost of transmission development to match their diagram would be about $30.5 billion.[1]

SCE’s Pathway 2045 report says: “By 2045, more than 80GW of additional utility-scale energy storage will be needed in CAISO’s footprint. This is an annual development rate two to three times higher than historical levels and represents approximately $170 billion of clean energy investment.”[2] That report also indicates: “From 2030 to 2045, grid investment of up to $75 billion will be required to integrated bulk renewable energy generation and storage and serve the load growth associated with transportation and building electrification.”[3]

Maybe it won’t cost as much as going to the moon did, but it won’t be cheap.