April 15, 2020
(This article has been updated from the original April 14th version)
By Dave Hackett

When was the last time you filled up? For me, it was about a month ago. Since then, I’ve driven maybe 50 miles, mostly to the store and back. I used to fill up about once a week; now my next fill-up could be next month.

From a gasoline perspective, this is a demand crisis, not a supply crisis. People aren’t driving, they aren’t fueling up, and as you can see it in the chart below, gasoline demand is off by nearly half. These data are a bit behind the market, and our friends in trucking and retail are saying the numbers continue to decline. 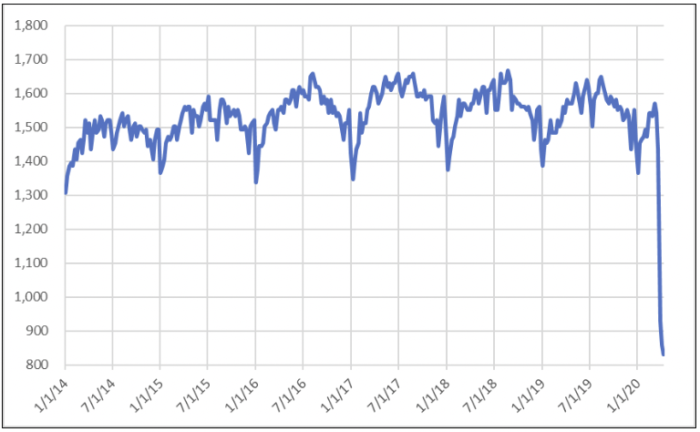 * Petroleum Administration for Defense District (PADD) 5 is the western U.S.

Retail prices for gasoline have fallen along with demand. West Coast Reformulated Regular – the type of gasoline sold throughout California and in Phoenix, AZ – is down to $2.75, according to the U.S. Energy Information Administration (EIA) last Monday. This price is off 45 cents per gallon (cpg) in the past month. The last time retail gasoline price was this low was February of 2017, as shown in the figure below. 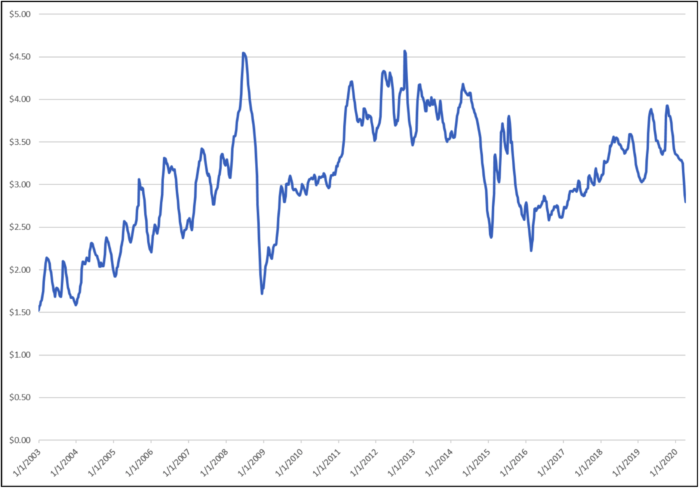 Spot prices mark the cost of gasoline at the first place it trades – the refinery gate. According to the OPIS West Coast report, on April 7th the Los Angeles spot market for RBOB (the refinery-produced blendstock from which reformulated gasoline is made) reached 31 cpg, the lowest price recorded since EIA began tracking RBOB prices in 2003. This marked a decline of $1.40 in just one month.

Meanwhile, the NYMEX futures price for RBOB was 68 cpg on April 7th. Normally, Los Angeles trades at prices higher than the NYMEX this time of the year, meaning the current 37 cpg discount for Los Angeles RBOB vs the NYMEX is likely a record as well. This record-low pricing reflects the demand destruction discussed above and, relatedly, very high gasoline inventories.

With demand dropping sharply while production continues, gasoline inventory has built strongly for three weeks as shown in the figure below, then increased only slightly this week. Currently, total gasoline in storage is at 35.0 million barrels (MB). The highest stored inventory ever recorded by EIA was 36.8 MB in January of 1994. From a historical perspective, one could conclude that there is about 2 MB of room in the West Coast’s “gas tank.” 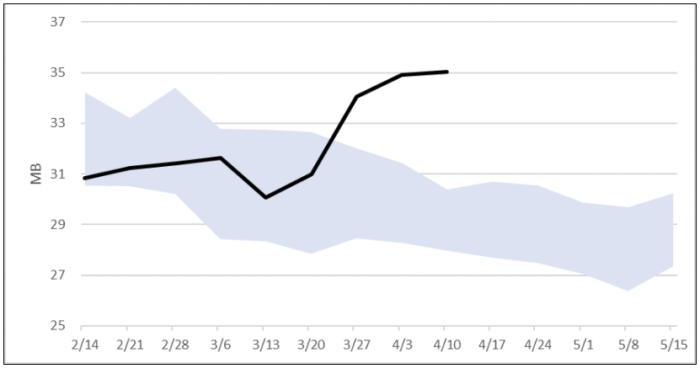 On the other hand, the EIA reports that the industry refineries and terminals have a total of 58.2 MB of capacity – much more than ever utilized previously. Stillwater is keeping a keen and interested eye on where the numbers will peak out, and that peak will depend in large part on how refiners react to current market conditions.

So, with demand in sharp, sudden decline and inventory space filling up, how are refinery operators currently reacting? Starting a couple of weeks ago, they have cut crude runs. This decline in crude runs can be seen in the figure below. 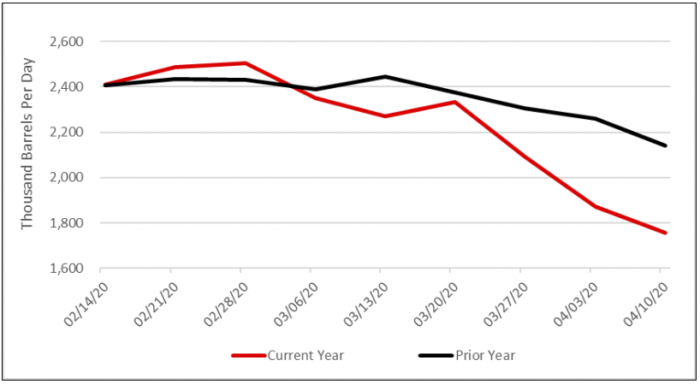 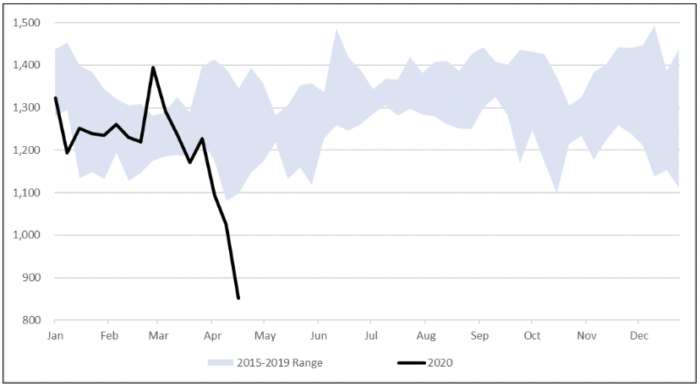 If a refiner fails to reduce gasoline production to a level that is about equal to demand, they would likely have to shut down the refinery because they have run out of room to store the gasoline.

So, all of this begs the questions: How low can gas prices get, and how long will it stay cheap?  For California, retail gasoline prices could fall to below $2.00 per gallon if spot prices remain at these low levels. It is worth noting that, currently, California’s taxes and climate change fees make up about $1.00 of the per-gallon cost to consumers. Gas prices will stay low until the high gasoline inventory levels drop to more normal levels. That could take months.

Want more information or a deeper dive into the data and trends? Contact us to find out how our experts can help you make wise decisions in these unparalleled times. Stillwater Associates see things others miss because we’ve “been there and done that.”