On December 4, 2018, the U.S. Coast Guard (USCG) hosted its 2018 Liquefied Gas Senior Executive Forum in Houston. The program was co-sponsored by the Society of International Gas Tanker and Terminal Operators (SIGGTO) and the Society of Gas as a Marine Fuel (SGMF). The forum’s speakers addressed many aspects of using LNG as a vessel fuel. The program included sessions on safety and inspections for gas carriers and presentations on the use of natural gas as a vessel fuel. Carnival Cruise Line and Crowley Maritime provided updates on the use of LNG as a bunker fuel, addressing safety issues but not economic ones. Other speakers, including equipment and engine designers and suppliers, addressed efforts to facilitate using LNG as a vessel fuel. Fuel suppliers and inspection firms also spoke about their efforts to increase LNG supply and ensure safety of crews and vessels. Finally, several speakers discussed the impact of floating storage regas units (FSRUs) on the LNG market.

We covered comments made at the forum by the USCG and other government agencies in an earlier article. The U.S.’s approach to LNG as a bunkering fuel is shifting, causing some concern and confusion in the shipping industry. There are, however, already many non-government participants in the LNG industry helping to establish a solid safety record for gas transportation. Today, we offer insights into who is currently operating in this space and how they might move the shipping industry forward in the LNG space.

Properly designing the safe delivery of LNG to vessels is of great concern for the shipping industry, and a number of players are entering this space. Azir Bamik of GTT North America spoke about the expanded role of GTT from a cryogenic tank contractor to now offering services along the supply chain – from specifications for fueling systems to system construction. GTT designed the tanks in the LNG-bunkering barge Clean Jacksonville which has an LNG storage capacity of 2,200 m3 (compared to LNG vessels with typical capacities of 170,000 m3). Pictured below, you can see the Clean Jacksonville’s flexible loading arm that enables connections to various vessels. The Clean Jacksonville also has a reliquefication unit (the white rectangular unit at the top of the vessel) to manage the barge boil-off without venting. 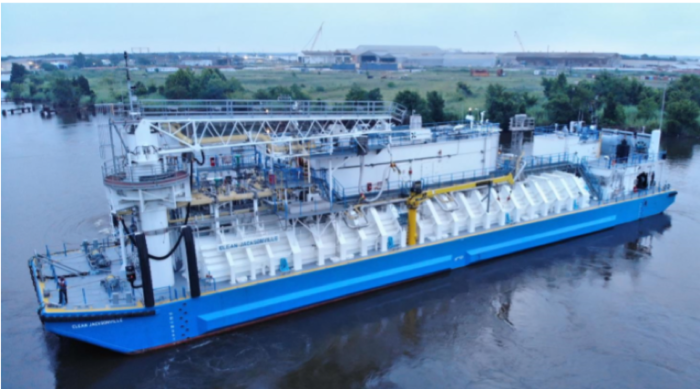 The Clean Jacksonville will be used to load LNG at the Port of Jacksonville, delivering its typical cargo of 1,000 m3 to fuel the TOTE Maritime containerships, such as the Perla del Caribe (pictured below) and Isla Bella for deliveries to Puerto Rico. 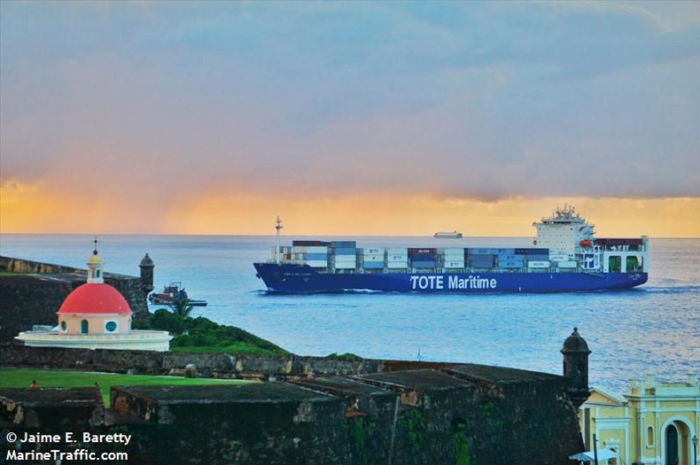 Mr. Bamik also spoke about the 19,000 m3 LNG fuel storage tanks that will be installed on CMA CGM’s[1] much larger 22,000 twenty-foot equivalent units (TEU) containerships. These large vessels are expected to refuel just once every 82 days on the China-to-Europe roundtrips due to their expansive storage tanks, alleviating the concern about fuel and refueling capacity and availability. Total, a French company, won the supply contract for these containerships and will provide the bunkering vessel to supply the fuel to the containerships while in French ports. GTT’s LNG efforts expand beyond containerships and bunkering vessels. Mr. Bamik spoke about an Arctic exploration passenger vessel, the Ponant Electric Hybrid Cruise Ice Breaker, that will be LNG-fueled and should enter service in 2021.

GTT has submitted a prismatic tank design that could operate up to a storage pressure of 30 PSI. Prismatic tanks in conventional LNG carriers may have ratings of only 1 to 2 PSIG. The prismatic GTT tanks may use vessel hull space more efficiently than the conventional cylindrical LNG bullet tanks.

Matt Jackson, VP of Crowley Fuels Caribbean noted that Crowley is developing LNG services in multiple markets. Crowley offers turnkey solutions for vessel design and fuel distribution. It also has two containership vessels and four LNG-ready petroleum tankers. Crowley is currently supplying a microgrid in Puerto Rico with ISO containers of LNG delivered through its containership service. The vessel El Coqui is a U.S. flag vessel with 2,100 m3 LNG tanks and a capacity of 2,400 TEU. It provides containership/Roll On-Roll Off services between Florida and Puerto Rico. Crowley demonstrates that large tankers are not required to enter the LNG space; small containership vessels suffice.

Shaunt Hartounian of Eagle LNG also spoke at the forum. Eagle LNG has a Maxville FL liquefaction plant (87,000 gallons/day) now operating as well as the bunkering facility in Jacksonville, independent of the JAX LNG project that is also in Jacksonville. The storage tank is a 12-million-gallon (45,420 m3) tank. They plan to have a 550,000 gallons/day liquefaction plant in Jacksonville by 2020 or 2021. He expects that the business would load cargoes sized from 4,000 to 40,000 m3. Eagle is also working on the midstream LNG business and supplying LNG to brown-water river fleets.

Rudolf Wettstein, General Manager of Marketing and Applications for Winterthur Gas & Diesel (WinGD), spoke about its LNG engine. WinGD has designed LNG engines for 39 LNG carriers and has more than a dozen companies with licenses to build its engine designs. Its engines are directly connected to the propeller shafts and are also used in the CMA CGM’s large 22,000 TEU containerships. It uses a lean-burn Otto engine cycle and achieves 1g/kWh NOx. Remarkably, WinGD has reduced its engine exhaust methane slip to just one percent using 145-220 PSI inlet gas pressure and a small amount of oil for ignition.

Though they did not present at the conference, QLNG Transport, LLC (Q-LNG) has a charter with Shell Trading to deliver LNG as a fuel to various ports in Florida and the Caribbean using an Articulated Tug Barge (ATB) designed to carry 4,000 m3 of LNG.

Uday Turaga of ADI Analytics spoke about trends in LNG Shipping. He noted that LNG floating storage regas units (FSRUs) have been key enablers of LNG demand growth. Such vessels have been able to supply gas demand quickly compared to conventional on-shore terminals that would take many years to construct. One example of such an LNG FSRU is a recent project in Bangladesh. In August 2018 just 18 months after contracts for the project were signed, the Bangladesh FSRU was operational. Ed Scott of Excelerate Energy – a company with nine FSRUs – spoke about his company’s extensive role in the Bangladesh project. Excelerate served as project developer on the Bangladesh FSRU project, supplied the vessel charter and the regas service. Additionally, the company built a 91 km subsea pipeline from its offshore connection to an existing onshore pipeline. Excelerate even operates the tugboat operations it uses.

Carlos Guerrero of Bureau Veritas (BV) also spoke about FSRUs. He noted that BV had classed 11 of the 29 existing FSRUs. He laid out the evolving roles for LNG vessels, where there may be conventional cargo carriers, FSRUs, and floating LNG liquefaction plants. BV has developed standards for a variety of vessels. One example he shared of repurposing a vessel is that there are now three floating storage units (FSUs) operating in Jamaica, Bahrain, and China.

Dave Morrison, Carnival Cruise Line’s Vice President of Maritime Quality Assurance spoke about Carnival’s simulator training for deck and engine room officers that operate any of the eleven LNG-fueled passenger vessels it has on order. The simulator has full-size mock-ups of the valving for LNG loading. The computerized system is able to mimic control room vessel operations under normal and abnormal situations, and it addresses safety management practices. Carnival has also had its engineers take tours of Shell’s LNG vessels to familiarize themselves with the vessels and LNG loading practices.

Jaspreet Kang of Rightship reported on the company’s vetting of Gas carriers. The company, formed in 2002, has 300 customers. The company assesses the risks around specific vessel charters for shippers. He explained that its predictive analytics project the likelihood that a vessel will have an incident in the next 12 months. The company assesses technology used in a vessel and the human expertise in the operators.  He noted that “greener” vessels in the fleet are often safer vessels as well. They’ve quantified the variables with modeling efforts to asses when and whether crews and vessels are safe for LNG operation.

Interestingly, no one at the forum in Houston spoke about the specifics of shoreside safety as related to the transfer of LNG from shore to vessel or from fueling barge to vessel. Likewise, there were no speakers discussing specific, available fueling hardware – such as flexible hoses – for shoreside LNG fuel transfer. As mentioned in our previous article, the U.S. Coast Guard is seeking adequate time to ensure the practices employed by actors in the LNG supply chain, including shoreside suppliers, will be carried out safely. Based on what was presented at the forum, the industry seems to be taking a holistic approach to LNG fueling rather than separating out the various components in the fuel storage and transfer system. GTT, for example, offers a package of services that includes a fully optimized LNG system rather than individual components, such as tanks. This approach avoids compartmentalizing different parts of the LNG design process. The class societies are also aware of these LNG system-integration needs.

The overarching theme reiterated by each of the speakers mentioned above was that the LNG market is growing and, with proper crew training and vessel certification, is quite safe. We got the sense that current LNG market participants want to ensure that no other market actors derail the future of LNG as a bunker fuel by not taking the proper precautions and seeking assistance from those already experienced in the industry. Hiding information for the sake of “competitive advantage,” for example, is not actually advantageous to anyone in the LNG industry in its current stage. All market actors depend on one another at this point.