The tragedy in the Ukraine 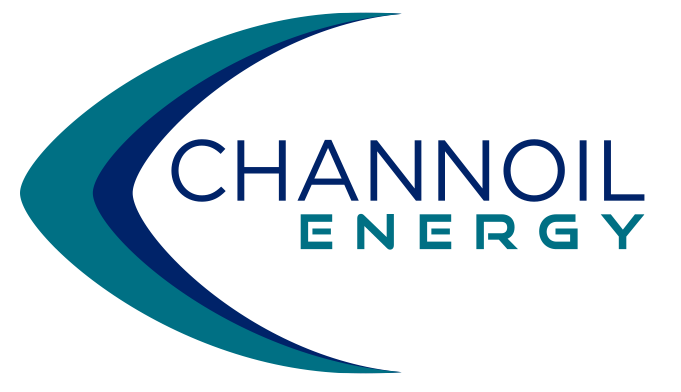 History of the Soviet Pipelines

To understand the energy dynamics of today’s war in Ukraine, it is necessary to visit the history of the pipeline systems that were built during the Soviet period and within the Warsaw Pact countries.

Firstly, most of the production of oil and gas is in Russia and very little in the other FSU countries and most of that oil production lies West of the Ural Mountains. Pipelines were built to take the crude oil to refineries in the other Warsaw pact countries.  These pipelines were named Friendship (Druzhba) pipelines. The maps below show the pipelines that run from Russia into Europe and through the Ukraine.

The southern Druzhba feeds the small Ukraine refineries of Drogobych and Nadvorna and then flows onwards into Hungary, The Slovak and Czech Republics and on to the Balkans.

The Northern Druzhba goes into Poland and what was East Germany.  The other leg of the pipeline supplies the larger Ukraine refineries of Kremenchug and Lisichansk, Kherson and Odessa. Lisichansk is/was from 2014 already under Russian control, as it is in the Luhansk region of the Donbas. Since the start of this war, Kherson has fallen to the Russians and Odessa is next in their sights. 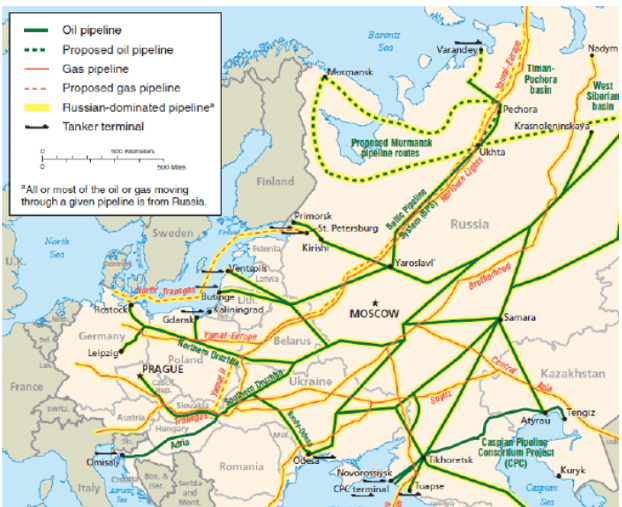 The main gas line also passes through the Ukraine and feeds the same countries as the oil line does and additionally Germany. This line branches off into the south and goes through Romania and Bulgaria, Greece and on to Italy.

Map 2:  Pipelines in the Ukraine 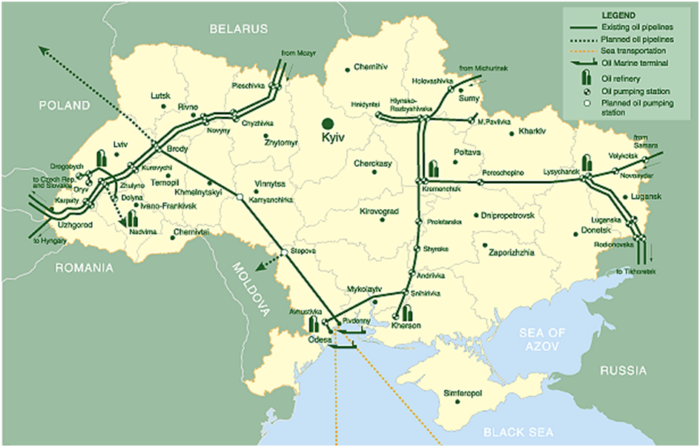 After the collapse of the Soviet system

Once the Soviet Union collapsed, the countries separated into sovereign states and took control of their section of the pipes. This meant that they imposed tariffs on the Russian oil that was flowing through them.  Naturally Russians did not like this new regime and looked to their own systems to avoid what they considered as rapacious tariffs levied by the new owners.  The Ukraine stood to gain most as it was the major transit route.

The Kleptocracy that Russia became, was to some extent copied by the Ukraine and a lot of the crude oil and gas being consumed in the Ukraine was not paid for.  A lot of negotiations took place to rectify the situation, but it remained politically unstable.

To this end the Russians started to build pipelines that were wholly within Russian territory. For oil they built a line from Samara to Tikhoretsk and thence to Tuapse and Novorossysk. This bypassed the Donbas line.  In the North they built an export terminal at Primorsk and connected this by the BPS 2 line from Yaroslava.

For gas they built South stream through Turkey to Italy and Nord Stream 1 and 2 under the Baltic to Germany, bypassing the Baltic States.

What is noteworthy about these two lines is that Russia does not have the productive capacity to fill all its lines.  If BPS 2 is fully utilised, then the southern Druzhba would be underutilised, likewise the Yamal gas line through the Ukraine would be under-used should Nord Stream 2 be fully utilised.

Thus, it is clear that by pushing oil and gas through these lines, the Ukraine becomes isolated and can be starved of energy.

There is only one line that could be used to import oil into the Ukraine from outside Russia and that is the Odessa-Brody line.

As an aside there is another problem that the Russian and Belorussian refineries have been dealing with and that is the Baltic States.  During the Soviet era, the Baltic states were the outlets to the sea for surplus Russian products. These were delivered to the coast by pipe or rail. Freight rates were friendship rates (or uneconomic in a capitalist system).  This changed post-Soviet and the tariffs charged by the Baltic States suddenly appeared very high, compared to the tariffs still extant within Russia.

Again, this led to a spate of oil terminal construction within Russia to avoid transiting the Baltic States.

I would suggest a watch be kept on Lithuania. This country stands between Belarus and the Russian Oblast of Kaliningrad, the only Russian ice-free port in the Baltic. Lithuania charges a tariff for transit of Russian and Belorussian goods enroute to Kaliningrad. A sure target for the Russians.

The Odessa-Brody line is a 36-inch line from the port of Pivdenny near Odessa to Brody, where it meets the Southern Druzhba, very close to the Polish border.   This line had been financed by US interests.

During 2004, a number of proposals were made to use the Odessa-Brody line as a feeder for Caspian origin crude oil, primarily from Azerbaijan and Kazakhstan to the central European refineries, as a way of relieving the pressure on shipping through the Bosporus. A lot of work went into this and it seemed a promising alternative to the dominance of Russian crude oil. It was also a way of sweetening the barrel in central Europe, given the ongoing pressure to reduce sulphur content in products.

Furthermore, as BPS 2 had already been mooted by the Russians, it made eminent sense to have an alternative way of getting crude oil to these refineries should things turn sour in Russia.

However, at the time, there was a strong pro-Russian push back by the Ukrainian government and finally the Russians persuaded the Ukrainians that, not only would Russian oil companies pay the $100,000,000 to fill the line, but also guarantee at least 9 million tonnes per year of throughput.  What happened in practice is that TNK-BP filled the line, loaded two cargoes of 100,000 tonnes each and then stopped pumping oil.

This effectively killed the Odessa to Brody route.

The Ukrainian approach to tariffs

The major problem for Russian oil companies, was that the Ukrainians tried to extract the maximum they could in tariffs from the transit and as there was no alternative the Russians had to pay. They never forgot that.

These pipelines were built over the easiest possible routes and the Steppes of the Ukraine provided the cheapest and simplest routes. With hindsight the Russians would never have built them there and now that they have BPS 2, Nord Stream and South Stream, they do not so much need them.

The other consideration for the Russians is that the Ukraine was in pre-Soviet times and to some extent still is, the breadbasket of Russia.  The Steppes of the Ukraine are very similar to the prairies of North America.

In addition to wheat, the Ukrainians also grow rape and sunflowers. These two are currently major feedstocks for biodiesel (FAME) production for export to Europe. Ukraine’s typical rapeseed production is 2.7 million tonnes in a season, which is around 4% of global rapeseed production. 90% of this is exported to the EU. One must ask if this season’s crop will even be sown in the ground, given that many Ukrainians are either being conscripted or are fleeing their country. This will cause a steep rise in biodiesel prices as well as supply chain disruption.

Thus, it can be seen, that apart from the ideological wish by Putin to recreate the former Soviet Empire as his legacy, there are also major economic considerations at play.

Charles Daly is Chairman of Channoil Energy, a global oil and gas advisory consultancy.
An international oil market expert and consultant to established and emerging companies, he is a recognised authority on oil supply markets in the Middle East, Northern and Eastern Europe and the Mediterranean. He has also been actively engaged in many business restructuring projects around the world. Charles has extensive knowledge of financing and of legal matters pertaining to the oil industry and he is regularly called upon to serve in court as an expert witness in legal cases. Several of these legal matters dealt with countries and companies in the Former Soviet Union, and presents papers internationally on a wide range of oil-related subjects.

For over 20 years, Channoil has been at the forefront of the global oil and gas advisory industry.  We are internationally recognised for our deep industry expertise and trusted advice. We consult for countries, governments, institutions and companies on all aspects of mid and downstream oil and gas.  Special insight for our consultancy work comes through established industry relationships and strong market contacts, providing up-to-date knowledge of international and domestic oil and gas markets.

We have built a focused, responsive, multi-disciplinary practice tailored to the industry’s rapidly changing demands and regulation.