The Social Cost of Carbon Part 3: What Does it Cost to Reduce Carbon in California’s Jet Pool? 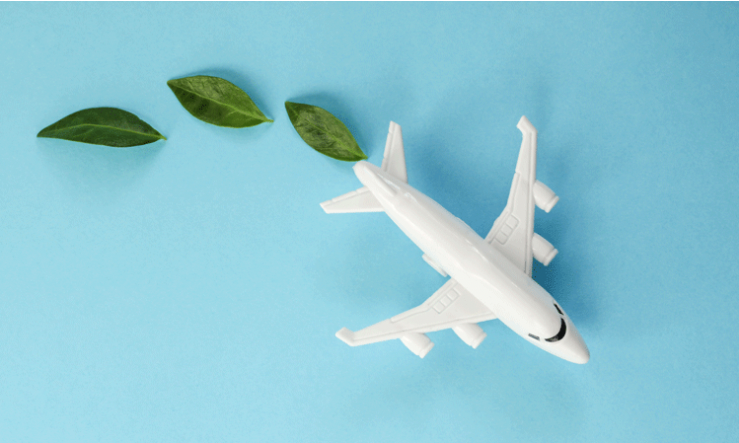 Stillwater’s first article on the social cost of carbon (SCC) defined the term and covered how the U.S. estimates the cost of climate change. The U.S. federal government has used numbers varying from $41 per metric ton (MT) under the Obama administration to near $1 per MT under President Trump, and, as of February 2021, $51 per MT under the Biden administration. In Stillwater’s second article on social cost of carbon, we explored the range of SCC values used around the world (from a low of $10 per MT for 2020 emissions in Minnesota to a high of $880 per MT for 2030 emissions in Germany) then specifically estimated the actual cost to reduce carbon in California’s diesel pool (about $630 per MT on October 10, 2021). In this article, we discuss what it costs to decarbonize California’s jet fuel pool.

As mentioned in Part 2 of this series, the easiest and most economical sector of the economy to decarbonize is the power sector. With the improvements made in wind and solar power technologies, the costs of generation via these methods approaches that of fossil fuels in certain parts of the world. However, there is currently no practical way to use electricity to propel commercial aircraft. The technology has not been developed, and batteries are too heavy and don’t store enough power to be feasible.

Another possible alternative to fossil jet fuel is green hydrogen, produced by splitting water into hydrogen and oxygen using renewable electricity. However, the technology to replace jet engines with hydrogen power in a plane does not exist, and hydrogen is more expensive and difficult to store than jet fuel, so the concept has not been proven yet. Researchers at the Aerospace Technology Institute (ATI) in the United Kingdom are conducting a research project called FlyZero, which is funded by the UK Department of Transport to develop a liquid hydrogen plane. Prospects for commercialization appear to be more than a decade away.

So, how can air travel be decarbonized today? The only practical way to decarbonize air travel is with renewable jet fuel (RJ), also known as sustainable aviation fuel (SAF). SAF is produced through the same technologies used to produce renewable diesel (RD) and is also a product of RD facilities but is a smaller fraction of the product yield than diesel. However, supply of SAF has several economic challenges:

These three factors, combined with the fact that since there  is no real blend wall for RD so producers don’t generally need  to incur the added costs of SAF to place all of their production, have caused many RD project developers to not pursue SAF production. Meanwhile, other producers such as NESTE, have invested in SAF production capability in order to increase the total market size for their products.

How do regulations impact SAF value, and how does this value compare to that of RD?

First, as stated above, the value of credits given to SAF is less than that of diesel for both the LCFS and RFS. Under the LCFS, RD has a regulatory energy density more than 6% higher than SAF which proportionally increases credits generated. The LCFS also compares SAF to a lower CI standard than RD, which also means it generates fewer credits per unit of energy. Similarly, the RFS assigns RD more credits (renewable identification numbers, RINs) per gallon because of its higher energy density. The costs added to RD from C&T, LCFS and RFS are also significant. These are all summarized in Table 1 below in which we list most of these prices and calculate SAF and RD values with both products having a carbon intensity of 40 g/MJ.

* We’ve used October 11, 2021 data, rather than pulling more recent pricing, for the sake of continuity with the figures presented in Part 2 of this series.

The spot prices listed are those of jet and diesel fuel in the Southern California market. Note that RFS costs are included in the spot price for diesel, which accounts for 15.5 cents per gallon (cpg) of the 20 cpg higher spot price for diesel than that of jet fuel. In addition, you can see that C&T and LCFS combined add 48 cpg of costs to diesel and that the values of LCFS credits and RINs are about 6% higher for RD than SAF. Overall, RD is worth about $1.00 per gallon more than SAF in California, and it is a bit less expensive to produce. This is the primary reason that SAF production is so much less than RD.

One thing that has been discussed in Washington D.C. that could balance the value of SAF to RD is to increase the Biomass-based Diesel Blender’s Tax Credit (BTC) for SAF to higher levels. The House Ways and Means Committee advanced a BTC for SAF proposal that would be between $1.25 and $1.75 per gallon depending on the carbon intensity. The Biden Administration has proposed a BTC of between $1.50 and $2.00 per gallon for SAF. Both of these proposals, if enacted, would significantly increase the value of SAF. To increase SAF’s value to equal that of RD, however, would require a BTC at the highest level proposed of $2.00 per gallon, and this would still not compensate producers for the additional capital required. Fortunately, current margins on RD are strong as demonstrated by the profits reported by Neste, Diamond Green and REG; if they remain strong, producers will be able to pay off the additional capital needed to produce SAF.

What is the cost to decarbonize jet fuel in California?

We added the calculated costs from the values listed in Table 1 and show them below in Table 2. If jet fuel were supplied into California at a cost that is $1 per gallon less than RD value, the cost to eliminate carbon in the jet pool, is $705/MT, 11% higher than eliminating carbon in the diesel pool. If the incentives to produce SAF increased by nearly $1 per gallon to equal RD value, it would enable widespread SAF production. In this case, the cost to decarbonize jet fuel is $856/MT, or about 35% higher than the diesel pool. This means that that jet fuel is about one third more expensive to decarbonize than diesel with existing technology. 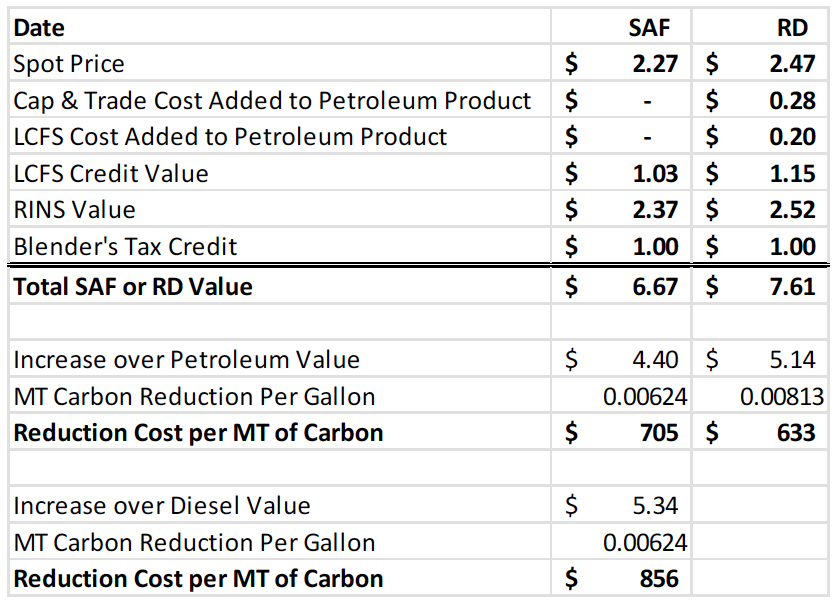 If jet fuel were treated like gasoline and diesel in the C&T, LCFS, and RFS so that obligation costs were added to jet fuel, it would further increase the value of SAF by increasing the cost of jet fuel, and further increase SAF production relative to RD. These costs are 15 cpg for the RFS, 27 cpg for C&T, and 19 cpg for the LCFS in this case, for a total added value of $0.61 per gallon of value added to SAF. Instead, jet fuel is not obligated under the LCFS, RFS, or C&T, so this 61-cent advantage for SAF over petroleum jet fuel remains hypothetical. Currently, producing SAF costs more than RD, and has a value of roughly three times petroleum jet, as shown in the table above. This value and production cost differential is important because airlines face the challenge of price sensitivity from their customers (i.e. if ticket prices increase, they sell fewer seats). Since fuel is a significant fraction of the cost to operate jet planes (roughly 25% of airlines’ total expenses), converting to SAF would add significant cost to the airline industry and increase costs to flyers.

Currently, SAF is approved for use in blends up to 50% even if recently a United flight was completed using 100% SAF in one engine. If, however, 100% of jet fuel is replaced by SAF, and SAF costs what petroleum jet costs as discussed above, and those costs were fully passed through to airlines, total airline expenses would increase by about 50%. This would likely cause ticket prices to increase by a similar amount. Based on how demand for air travel has historically been impacted by ticket price increases, the demand elasticity for air travel price at a national level is about -0.8 which translates to 100% SAF reducing U.S. air travel by about 40%. This potential reduction of demand is a key reason airlines are concerned with the costs and schedule of decarbonizing air travel.

In future parts of Stillwater’s series on SCC, we will look at the costs to reduce carbon in other parts of the world’s economy by looking in more depth at shipping transport by water, as well as other sectors such as industrial production, and home energy use.