The Search for Zero

A number of Stillwater’s clients come to us with questions concerning ethanol-free gasoline (E0).  These questions include items such as:

In this article, we provide brief answers to those questions and more. Before diving in, however, it is useful to define what is meant by E0. For the purposes of this discussion, we are referring to motor gasoline, as defined by ASTM Standard Specification D4814[1] and applicable state and federal regulations, which is blended without the use of ethanol. In general, this product is 100% hydrocarbon; however, gasoline blended with isobutanol is also marketed as “ethanol-free” and falls within this definition. Excluded from the “E0” category is aviation gasoline[2] (commonly, AvGas as defined by ASTM D910 for leaded AvGas or ASTM D7547 for unleaded AvGas) and racing fuels not intended for on-road use. While the vast majority of motor gasoline is utilized for light-duty cars and trucks, smaller amounts are utilized in heavy-duty gasoline engines, motorcycles, marine engines, non-road vehicles (snowmobiles, ATVs) and lawn and garden equipment.

Who uses E0 and why?
Nearly all gasoline sold in the U.S. market contains 10% ethanol (E10). Consumers looking to buy E0 generally have to go out of their way and pay a premium to buy it. Generally, they are willing to do so because they believe that E10 will not work sufficiently for their intended use or they believe that E0 is a superior product. While a proper technical review of the benefits and limitations of E10 is beyond the scope of this article, we can review the suitability and limits of E10 in several applications.

How much E0 is being sold and where?
Although the Energy Information Administration (EIA) and other organizations do not collect data on retail sales of E0 in the U.S., the share of the gasoline pool that is E0 can be estimated by analyzing total retail gasoline demand, total fuel ethanol blending, and E85 sales. In its Annual Energy Outlook for 2020, the EIA reports 2019 Motor Gasoline disposition as 9.30 million barrels per day (MBD), of which 0.01 MBD is in the form of E85.[4] Furthermore, the EIA reports fuel ethanol disposition at 0.91 MBD. Based on those figures, we estimate that the E0 disposition in 2019 averaged about 0.25 MBD or roughly 2.7% of U.S. gasoline demand.

Most of this volume is believed to be through retail gasoline stations which offer E0 in addition to the much more common E10 gasoline. Many of these sites are at or near marinas, as boaters are believed to be some of the major users. Additional sales of E0 are in the form of pre-packaged gasoline (containers of five gallons or less) sold at hardware stores or lawn and garden centers where they target users of non-road power equipment. Two websites offering information on stations offering E0 (www.pure-gas.org and https://find.mapmuse.com/brand/ethanol-free-gas) appear to use crowd-sourced data, and readers seeking E0 are advised to contact individual stations to confirm availability.

What are the economics behind the product?
U.S. refineries primarily produce gasoline in the form of 84-octane blendstocks for oxygenate blending (BOBs) which are intended for blending with 10% ethanol to produce E10. Very little finished 87-octane hydrocarbon gasoline is produced and distributed from refineries. To produce an 87-octane E0 for retail sales, a marketer needs to blend the 84-octane regular BOB with 40-60% premium BOB (89- to 91-octane, varying regionally) in order to meet the minimum 87-octane specification. The required premium BOB typically costs significantly more per gallon than the 84-octane regular BOB while ethanol is generally less costly than the regular BOB. Additionally, the party blending the 87-octane E0 does not acquire any RINs (Renewable Identification Numbers which are the credits traded under the federal Renewable Fuel Standard). An example calculation, based on recent spot prices in Seattle, is presented in Table 1 below. This calculation shows that, even with ethanol prices currently above CBOB prices, there is a large cost differential between spot E10 and spot E0, both at 87 octane. In some markets, E0 is produced using only the premium BOB, making the cost differential even larger. 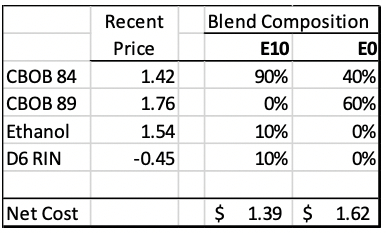 In addition to the costs listed above, E0 incurs additional logistics and retail costs due to the small sales volumes. The net result is that the retailer’s costs for offering E0 are significantly higher than those for E10, and retail prices reflect those added costs.

Looking for a more in-depth analysis of issues around E0? Contact us to learn how Stillwater can help.

[2] Motor gasoline is not approved for use in aviation

[3] U.S. EPA approves of the use of E15 for all 2001 model year and newer light-duty vehicles.  E15 is not approved for use in heavy-duty gasoline vehicles, motorcycles, or non-road applications.

[4] The actual fuel-grade ethanol content of E85 may vary between 51 volume% and 85 volume% depending on geography and season.  For purposes of estimation, EIA assumes an average of 74 volume% and that is used in this analysis as well.