The Oil industry is under pressure on many fronts in the climate change era, not least of which is from their shareholders.

First, the background, from the investors’ perspective. Over the past 15 years, the annual total returns to shareholders for the average oil and gas company has lagged the S&P 500 by seven percentage points. Oil stocks, accounting for more than a tenth of the bellwether index barely a decade ago, now account for just 4% of the S&P 500. This suggests the sector’s traditional business model has been under stress for some time.

Add to that the existential threat posed by the sort of competitor that the industry has never faced in the past – a competitor based on renewable sources of energy, as an alternative to fossil fuels, that is being heavily supported by governmental carbon emissions reduction mandates around the world.

It’s not hard to foresee a world where renewable energy will increase, and fossil fuels decline – the prediction of BP Energy’s Outlook 2020 – so investors are putting the Oil Industry under the microscope and are increasingly seeking out positions that reduce their exposure to climate change. 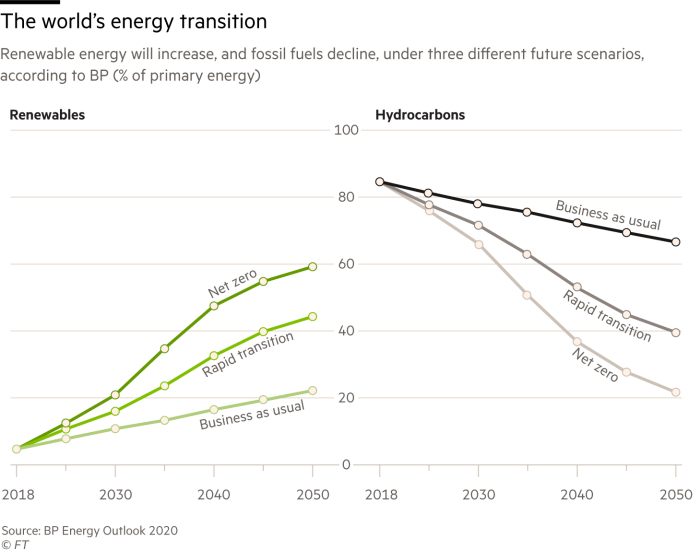 Now investors are pushing companies to disclose consistent, comparable, and reliable climate data, and a new breed of activist shareholder is challenging oil majors on their emissions-reduction plans. Earlier this year, climate change hedge fund investors managed to elect three new directors to ExxonMobil’s board in a rebuke to Exxon’s oil-centric investment plans.

Yet the Oil industry has natural advantages in this time of transition. The global economy still relies on fossil fuels for 80% of its power, and the transition to those alternatives will happen over time.  And there is a big chance that Big Oil will own this transition, as well as the renewable future that follows – by playing to its core strengths.

Here we identify seven areas where the Oil Industry has inherent natural advantages in renewable energy.

Wind. Oil companies and the oilfield service businesses that support them have unique expertise in how to build and operate in an offshore environment, which are key to this type of power. The installation of wind turbines in the sea, especially in deep waters, is pretty similar to installing oil platforms, especially floating platforms.

Solar. Oxy, EOG Resources, ExxonMobil and Chevron have all started solar energy projects in recent years. Many oilfields, such as the Permian Basin, are coincidentally well-suited to solar energy, with lots of cheap, flat land, good irradiance, and a regulatory framework favorable to project development, whether oil and gas or renewables. 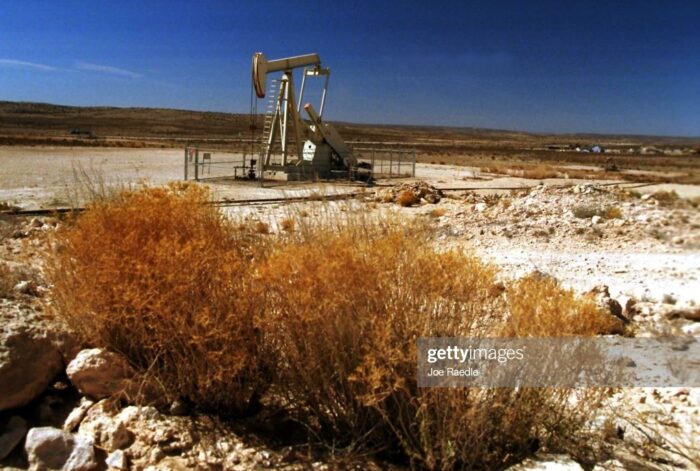 Hydrogen. Bloomberg New Energy Finance estimates that the cost of hydrogen could drop as much as two-thirds by 2050. The Oil industry has decades of experience with petrochemicals, the in-house expertise to support the development of hydrogen-related innovations and knows how to build energy production at scale. The industry’s existing pipeline infrastructure is adaptable to transport hydrogen.

Biofuels. The appeal of stacking the $1-per-gallon biomass-based iesel blenders tax credit (BTC) on top of California’s LCFS credits, has encouraged a race for renewable diesel production capacity in the Oil industry that will likely transform America’s fuel industry over the next few years.

Government support has created low carbon fuel markets that are profitable for oil refineries that have preexisting production infrastructures equipped to deliver qualifying fuels but also the currency of these government markets – LCFS credits and RINs – are increasingly valuable assets and provide the income stream that enables renewable project finance.

Carbon capture, utilization, and storage (CCUS): This is a natural fit for the Oil industry, one of the earliest adopters of CCUS technology, and it’s where it can reduce its carbon footprint while at the same time qualifying for decarbonization credits. To accelerate CCUS development the U.S. offers incentives like the BTC and the 45Q tax credit that businesses can take for storing or using captured carbon. 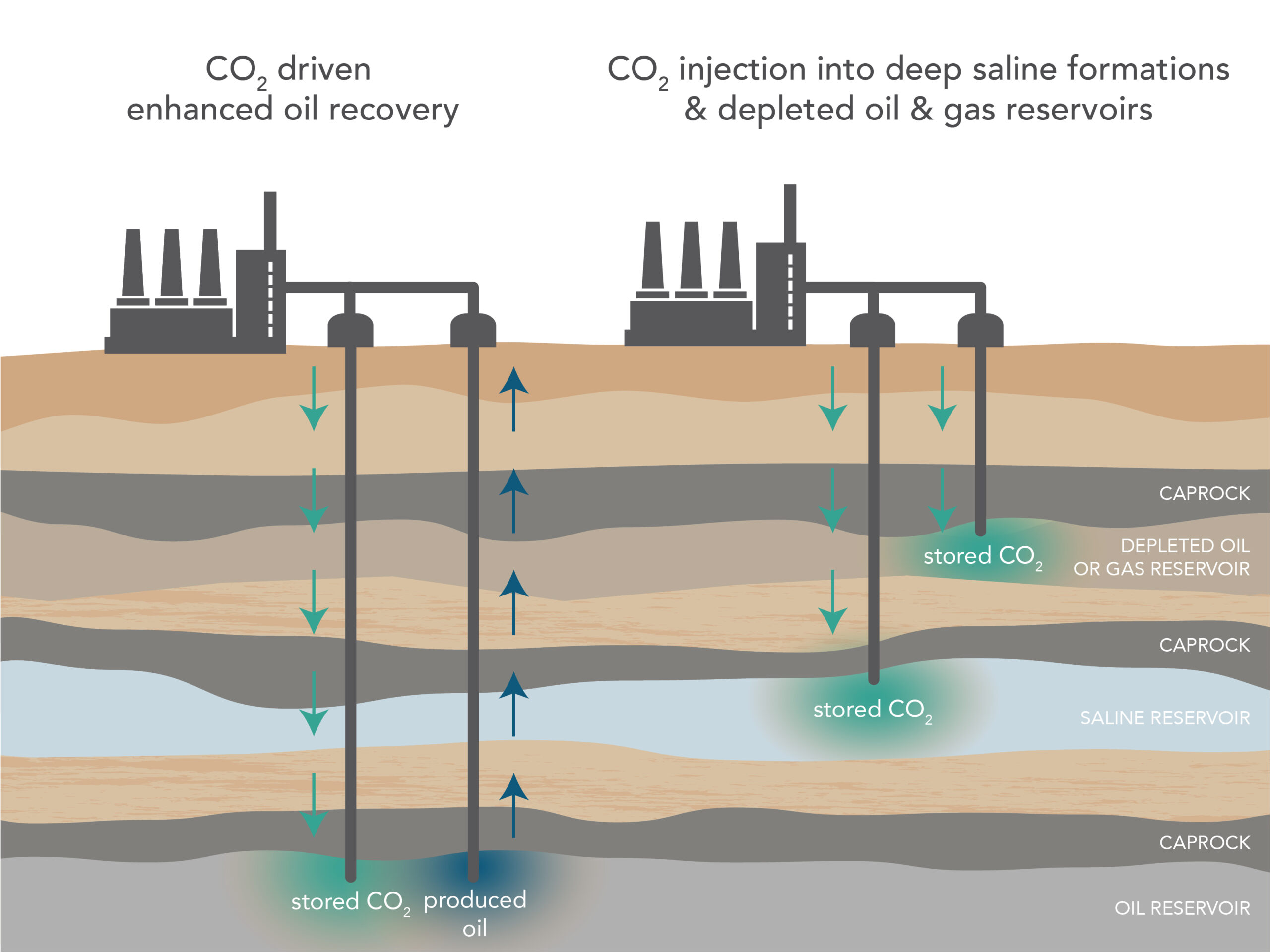 Offshore Metals and Minerals. The IEA calculates that an electric car needs six times the mineral content of one with an internal combustion engine. Manufacturing wind turbines, electric vehicles, solar panels, and batteries for energy storage requires resources, often scarce metals like cobalt, copper, lithium and nickel, found onshore and offshore. Offshore exploration gives the Oil Industry a clear advantage, and the seafloor holds great riches. It has been estimated that the ocean seabed contains six times as much cobalt, three times as much nickel, and four times as much of the rare-earth metals as there is on land.

Geothermal. Geothermal power plants currently account for a small portion of U.S. electricity generation, but a surge is underway. The U.S. Department of Energy projects that the share of electricity produced by geothermal plants could swell to 16%, rivaling nuclear and renewable energy sources combined. Achieving that kind of growth could put drilling rigs and oil field service companies to work almost overnight. The industry has a long history of innovative drilling advancements, and that experience could be a difference-maker in bringing deep dry rock geothermal systems to market.

Embracing change will push the oil industry to tap into the vast pool of expertise gained over more than 150 years.

Daniel Yergin, the Oil industry’s historian, the author of The Prize: The Epic Quest for Oil, Money & Power, and now IHS Markit vice chairman, said it’s an important turning point for the fossil fuel sector, “The oil and gas industry is calibrating itself to what has become the new benchmark — net zero carbon by 2050. There’s a lot of variation in strategies and thinking about what the new map will be to get there. But the themes that jump out are hydrogen, carbon capture, innovation — and the need for large companies with engineering capabilities that can operate at scale — which is where the oil and gas industry happens to be.”

The Oil Industry can leverage its natural advantages to profit from energy’s green future. The best opportunities are a short stretch from the industry’s core competencies and will be critical for some key capital-intensive clean energy technologies to reach commercial scale.