Back in February, we published an article about the factors contributing to the price of gasoline in California. We concluded that, contrary to what some may claim, GHG-reduction programs and taxes on petroleum fuels have a cost, and these costs are passed through to consumers. That first article focused on gasoline, but diesel customers also feel the pinch. Today we discuss California taxes and fees on diesel.

These requirements differentiate the diesel fuel supplied in California.

What is the price premium for retail diesel in California versus the U.S. average?

The figure below illustrates the average retail prices of diesel fuel for the U.S. and for California. The columns show the retail diesel price premium in California versus the rest of the country. As can be seen, the premium paid in California for a gallon of diesel compared to the rest of the country has risen rapidly since 2014. In 2014, the spread between California and the U.S. was less than 20 cents per gallon (cpg); by 2019, however, that spread had risen to about 87 cpg. That sizeable spread has held relatively steady through the pandemic – in 2020, it was 84 cpg, and for 2021 year-to-date the spread has been 76 cpg. 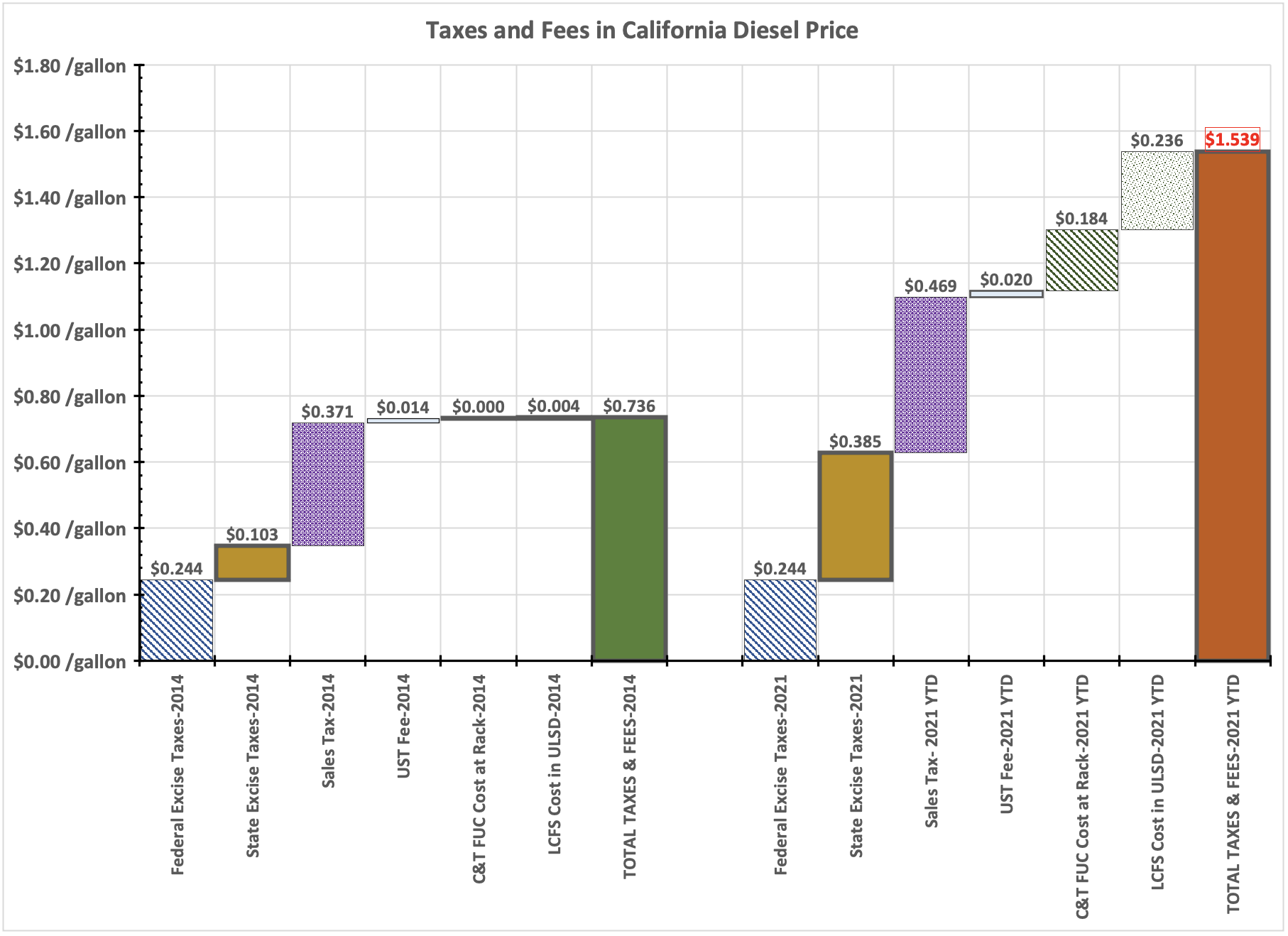 The years 2011, 2015, and 2018 are highlighted as those years marked significant changes to California taxes and greenhouse gas (GHG) fees on diesel. The year 2011 (bright green column) marked the year the Low Carbon Fuel Standard (LCFS) was implemented. The year 2015 (light green column) marked when the fuels under the cap provision began under the state’s Cap & Trade program. The year 2018 (light blue) marked the first full year after the fuel excise taxes were increased by Senate Bill 1 (SB1) in November 2017.

What taxes and fees contribute to the California retail diesel fuel price?

The federal excise tax of 24.40 cpg for on-road diesel fuel is the same across all states and has been at this level since 1997, but state and local taxes and fees levied against on-road diesel fuel vary from state to state. According to the American Petroleum Institute (API), taxes and fees, including the federal excise tax, average 62.25 cpg across the U.S., with a high (excluding California) of 99.60 cpg in Pennsylvania to a low of 38.22 cpg in Alaska. California is shown at 107.46 cpg, the highest indicated by API. Our analysis, however, shows that API’s pricing index does not include the “hidden taxes and fees” imposed by the California’s GHG regulations.

In California, the taxes and fees applied to on-road diesel are:

The last two items, FUC and LCFS, are not considered in the tax and fee category by API or the U.S. Energy Information Administration (EIA) as these items do not strictly use a cent-per-gallon rate, a percentage of price, or may not be collected by the state. The two GHG “fees” are an indirect charge on the fuel characteristic and a GHG emission price. However, since the application of both GHG programs mimic a fee or tax and are passed through to the retail consumer, they are included in our definition of taxes and fees.

The following figure compares the total retail diesel fuel taxes and fees from 2014 through the first four months of 2021 in California. As can be seen, the trend of the price premium generally follows the amount of taxes and fees that are applied to diesel fuel. 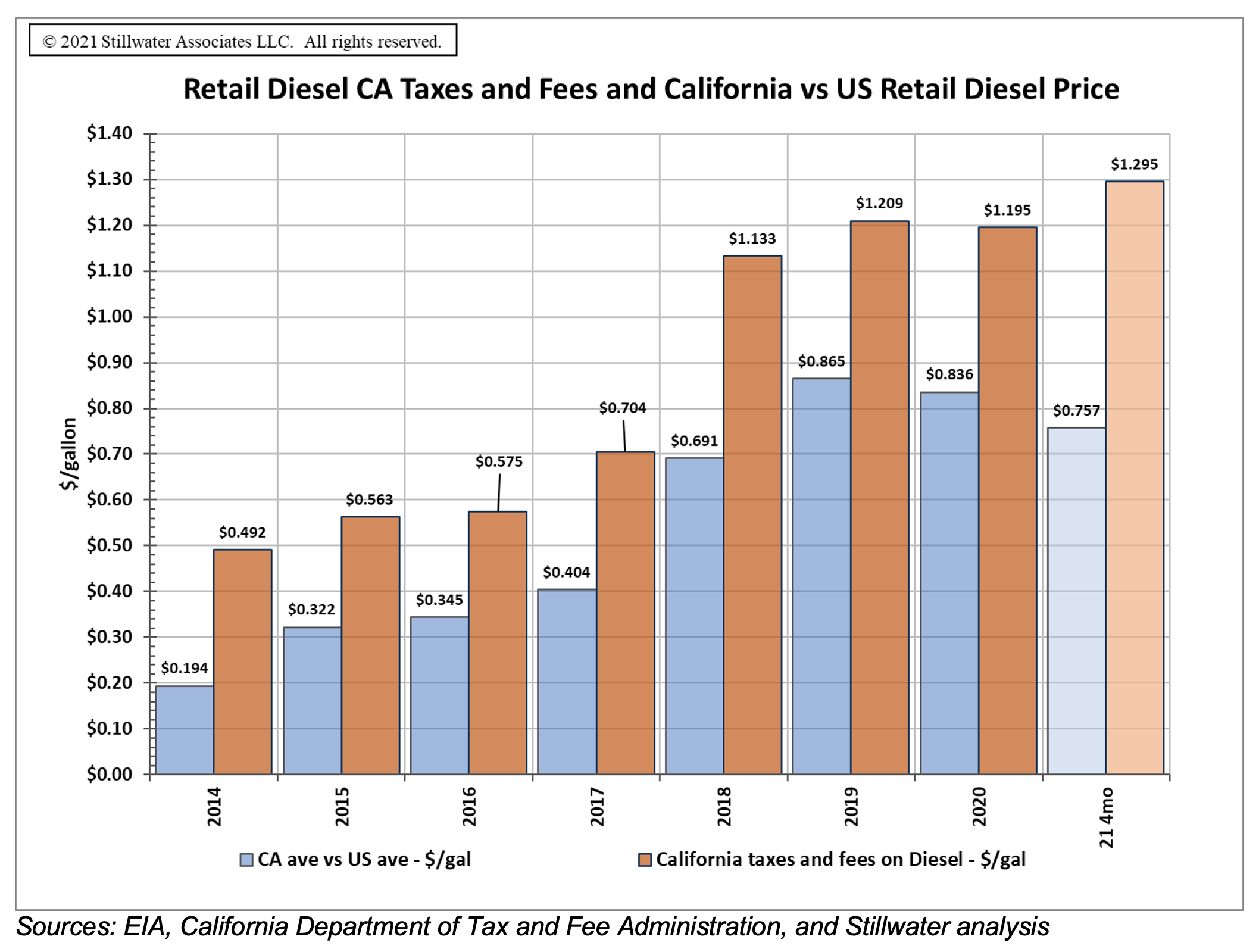 How much are the components of Taxes and Fees for Diesel Fuel?

The following figure illustrates each of the components included above for 2014 and 2021 which covers the period when California’s taxes and fees for on-road diesel fuel increased sharply. As can be seen, the total taxes and fees in California imposed for on-road diesel fuel has more than doubled since 2014. State excise and sales taxes account for about one-half of the increase with the two climate change fees accounting for the other half.

As can be seen, price increases due to taxes and fees for on-road diesel since 2014 are not insignificant. Compared to gasoline, the burden of the excise and sales tax increase has fallen on diesel fuel as illustrated in the following figure. 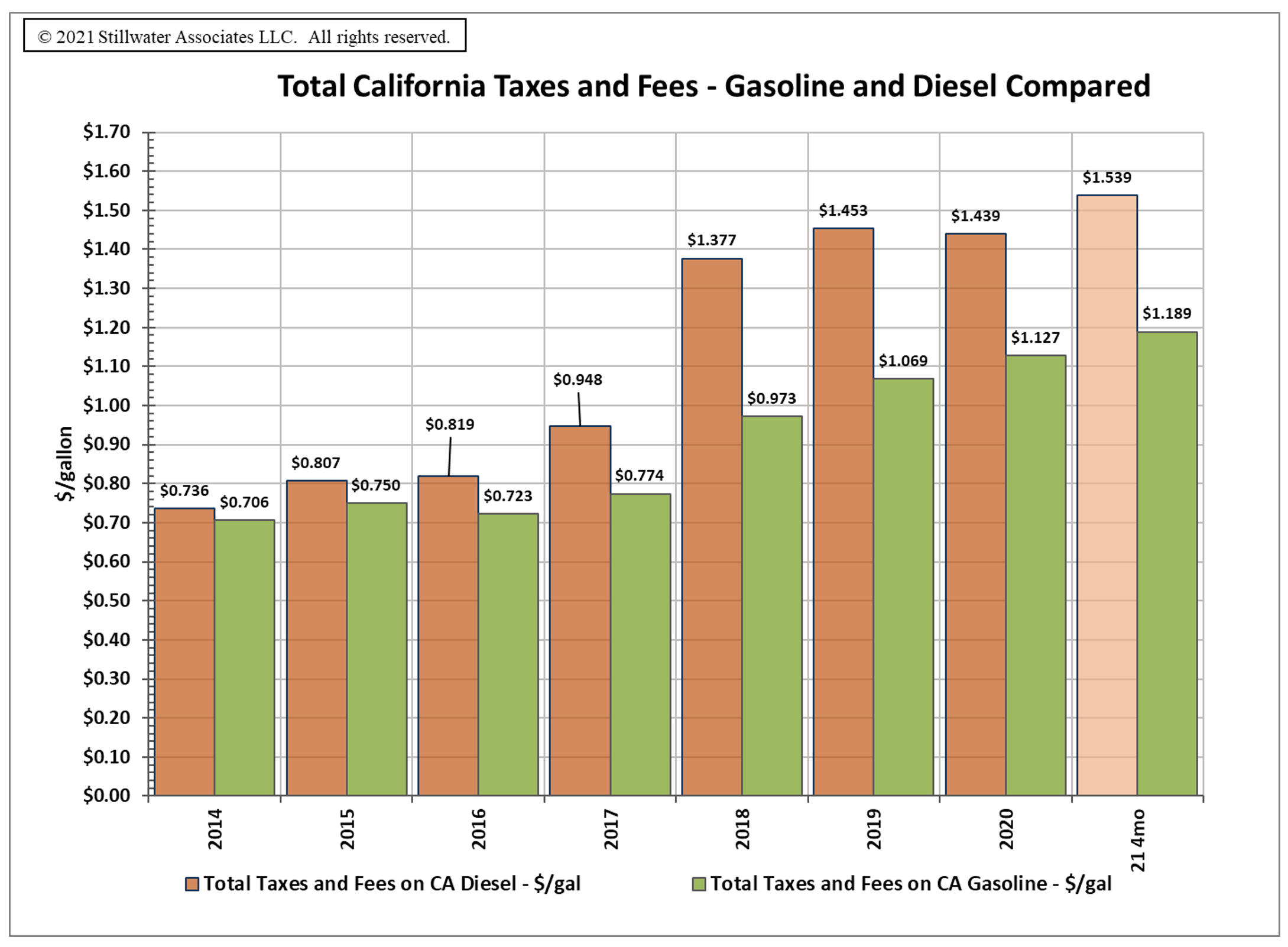 The following table contrasts the rates and current values of each tax and fee component on diesel compared to gasoline. As can be seen, the total value of taxes and fees on diesel fuel is higher than gasoline. This difference is mostly a result of the higher sales tax rate on diesel fuel.

So, what can we expect in the future? Based on current statute and regulations, we can expect:

As a result, we expect that the spread between retail diesel in California compared to the national average to continue to grow.

Conclusion: GHG-reduction programs and taxes on petroleum fuels are costs which are passed through to consumers. Making the costs of combating climate change transparent can help consumers make a knowledgeable choice concerning how to reduce their carbon footprint.

Want a deeper or more specific analysis? Contact us!