In our article on this topic on September 29th, we briefly discussed the causes behind the rise in retail gasoline prices. Here we take a deeper dive in to what happened to gasoline supply this fall, why costs hit those crazy highs, and the resolution to the problem…this time. You can find further detail in our California Gasoline Supply Issues Analysis Presentation on the Stillwater website.

The most recent California gasoline price spike starts with the pandemic.

At the height of the pandemic lockdowns in 2020, petroleum demand cratered, and refiner margins followed. At operating refineries, maintenance budgets were slashed, and maintenance crews were unable to assemble due to COVID restrictions. Marathon’s 161 kbd Martinez refinery was idled in April 2020. In August 2020, Marathon announced they would idle the refinery, and in March 2021 they approved plans to convert the refinery to renewable fuel production. This represents about 8% of in-state capacity. In August 2020, P66 announced it would close the Santa Maria crude processing facility and reconfigure their 114 kbd Rodeo facility to renewable fuel production, expected to start in 2023. This represents another 7% of in-state petroleum product production capacity. And as the effects of the pandemic ease, just like other industries, refiners are facing a labor shortage.

With refinery closures, a short West Coast gasoline market is the new normal. 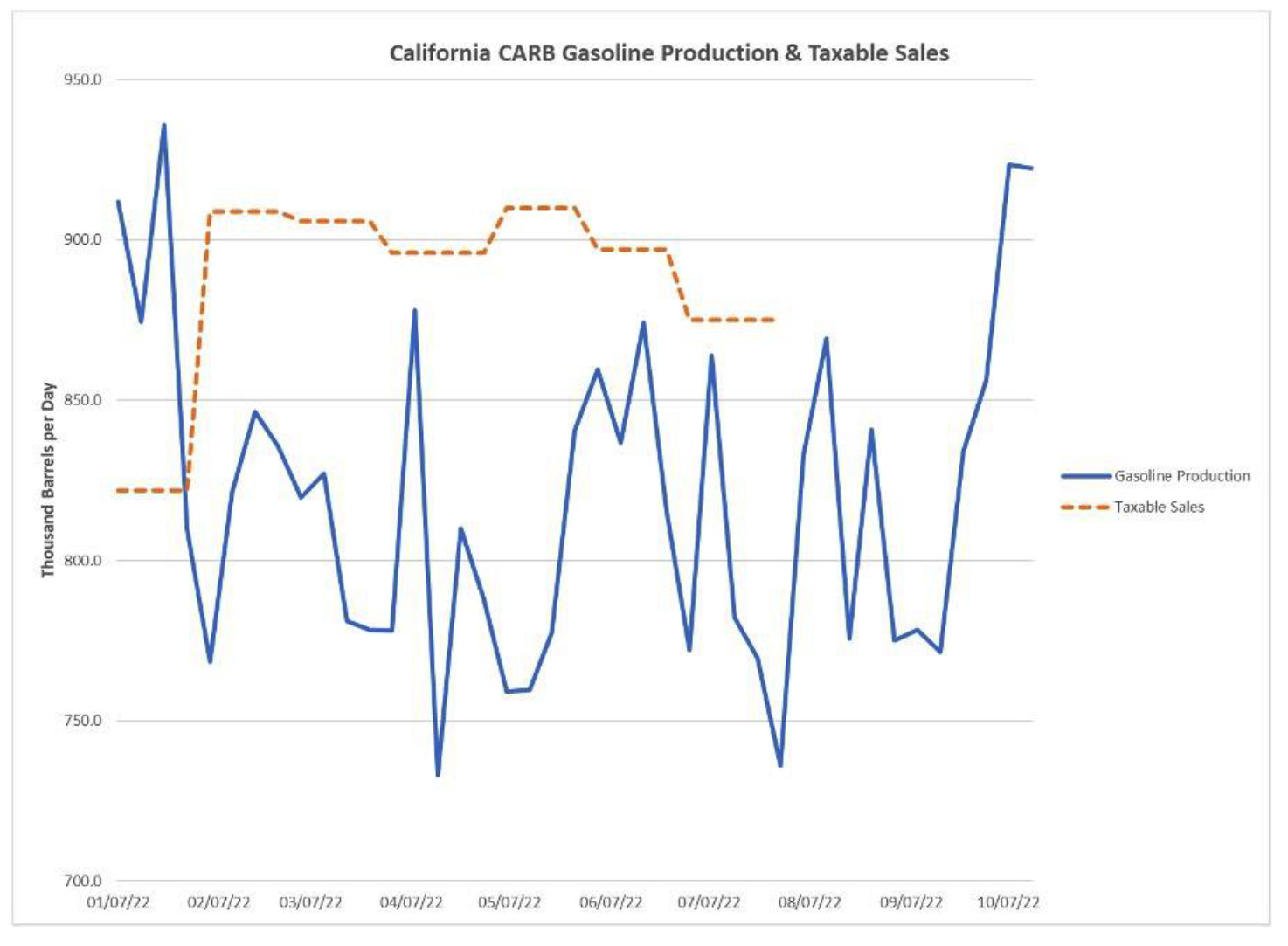 Spring 2022 planned turnarounds were deferred after Russia invaded Ukraine. To keep up with demand, refiners deferred maintenance through the summer. This led to a pileup of planned and unplanned outages in the fall. September saw five West Coast refineries down for maintenance including Chevron Richmond and P66 Carson for unplanned maintenance, and Marathon Carson, Valero Benicia, and P66 Anacortes for planned maintenance.

Low inventory & lack of imports contributed to scarcity in the market.

Creating a barrier for imports is the high cost of freight. It is likely that this is the reason summer imports were low. Argus reports lump-sum freight rates for 35,000t shipments from South Korea to the U.S. West Coast rose by almost 44.8% from the end of August to the middle of September.

California refining capacity has been shrinking since the 1990s.

The impact of the pandemic on refineries is exacerbated by the long decline in the California refining industry. Since 1993, the U.S. refining industry has grown nationwide, increasing by 19%. By contrast, California’s refining industry has decreased 16%. Because the Clean Air Act waiver allows the state to write its own air quality regulations, California’s refineries are uniquely tooled to meet the stringent state regulations. The California Air Resources Board (CARB) has set more restrictive standards for gasoline and diesel than the national standards. California refineries are engineered to produce the CARB specification, but these boutique fuels create barriers to entry for outside suppliers.

The market has seen a positive shift since CARB issued the September 20 regulatory advisory for an early transition to winter-blend gasoline. Retail gasoline costs are down, production is increasing, imports are arriving, and inventories are climbing. However, with more gasoline refining capacity coming offline in 2023, and if demand remains high, these short market conditions will continue.

The pandemic was a major contributor to the wave of unplanned refinery maintenance, with unreliable import availability and low inventory compounding the gasoline supply shortage. This has all happened during a long decline in California refining capacity due to a uniquely stringent state regulatory environment. In this instance, Governor Newsom’s action to switch to winter blend gasoline a month early increased gasoline supply and led retail gasoline costs to go down. But the short market conditions will be the new normal until either demand decreases or increased supply becomes available.