RFS Point of Obligation Part 1: How Does the RFS Work?

For the past year or more, there has been a lot of discussion in the transportation fuels industry on moving the current Renewable Fuels Standard 2 (RFS2) point of obligation to the point where rack blending occurs. Currently the point of obligation is with refiners and importers, however the RINs for RFS compliance are separated further down the supply chain by companies who blend the renewable fuels. Several obligated parties have petitioned the EPA to change the rules of the standard and move the RFS2 point of obligation. Until recently the EPA has proposed rejecting these petitions. However, with a new EPA administrator the decision to reject the petitions is still up in the air. What does this mean for the various parties involved in the RFS? We will discuss this topic through a series of articles over the next few months. In this first article, we will discuss how the RFS currently works.

RFS2 is the nickname given to the EPA regulation issued in compliance with Congress’ Energy Independence and Security Act of 2007 (EISA) legislation. Figure 1 summarizes the initial requirements of RFS2. There are four obligation categories: Advanced Cellulosic Biofuel, Non-Cellulosic Advanced, Biomass Based Diesel, and Conventional Renewable Fuel. As passed by Congress and promulgated by EPA, the rule places the obligation for meeting the RFS annual requirement on refiners and importers, known as obligated parties. 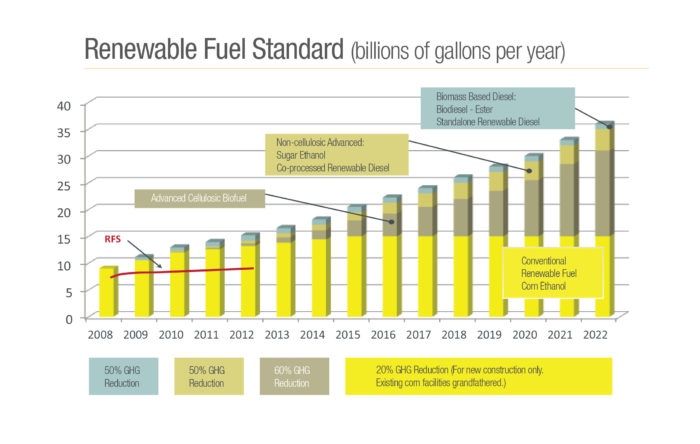 In order for the obligated party to demonstrate annual compliance to EPA, they must obtain and retire the Renewable Identification Numbers (RINs) associated with specific renewable fuels. Table 1 shows the various types of RINs under RFS2.

Table 2 shows which types of RINs can be used to meet each of the four obligation categories.

The above description does not include many of the complex details of the RFS but is sufficient to understand how the obligations are created and met. In the next article in this series, we will discuss some other methods for generating RINs. We will also examine terminal blending in more detail.