Price Differentials Inside the Bubble Improve 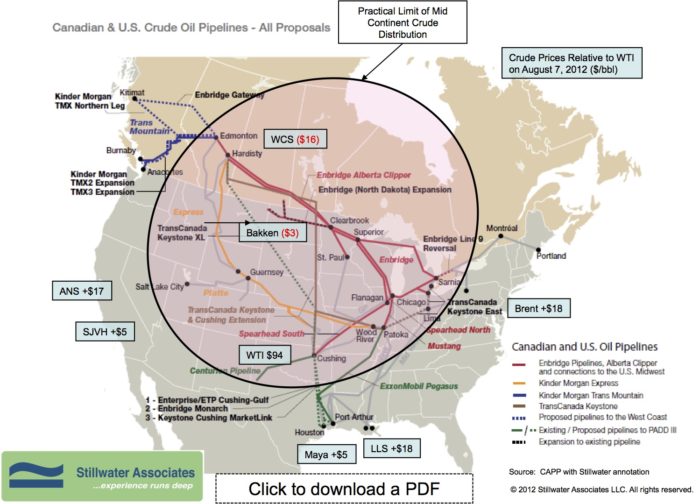 Crude oil prices are up considerably since our last blog post. WTI closed at $94 on August 7th, up $6. The spreads between WTI and most coastal crudes remain relatively unchanged. However, the San Joaquin Valley Heavy differential has shrunk to $5 over WTI, down from $9 last week. Discounts in the Mid Continent have tightened. Bakken’s discount is $3 under WTI, down from $5 last week. The spread between WCS and WTI has to $16 under WTI, from $23 under on July 31st. The WCS price rebounded Tuesday on news that Enbridge’s Line 14 was cleared for restart and had resumed operations.

Mid Continent crude prices will also soon see the effect of increased rail infrastructure moving crude out of the bubble. OPIS is reporting a few rail infrastructure updates we find particularly interesting. First, Global Partners has completed a major rail expansion at its Albany NY terminal, increasing the capacity from 55,000 bpd to 160,000 bpd. The expansion was designed specifically for Bakken crude deliveries to the Northeast. The Albany terminal began delivering about 10,000 bpd of Bakken crude to the Phillips 66 Bayway, NJ refinery late last year. Could deliveries to Delta’s Trainer, PA refinery be far behind? Second, Plains All American Pipeline has announced plans to build new rail facilities in Tampa, CO and Yorktown, VA with a completion date around Q3 2013. Rail improvements to the West Coast are looking up too. Reuters is reporting that Tesoro’s plan to move 40,000 bpd of Bakken to their Anacortes refinery by year-end has been revised and they now expect to move 50,000 bpd.