In accordance with California Governor Gavin Newsom’s Zero-Emission By 2035 Executive Order, the California Air Resources Board (CARB) is developing a ban on the sale of new internal combustion engine (ICE) vehicles by 2035. The goals of this ban are to promote clean air in the state and to mitigate climate change. Stillwater’s recent analysis, Possible Market Implications of California’s Efforts to Ban Internal Combustion Engines, evaluates the two scenarios in CARB’s 2020 Draft Mobile Source Strategy (MSS). These scenarios include: 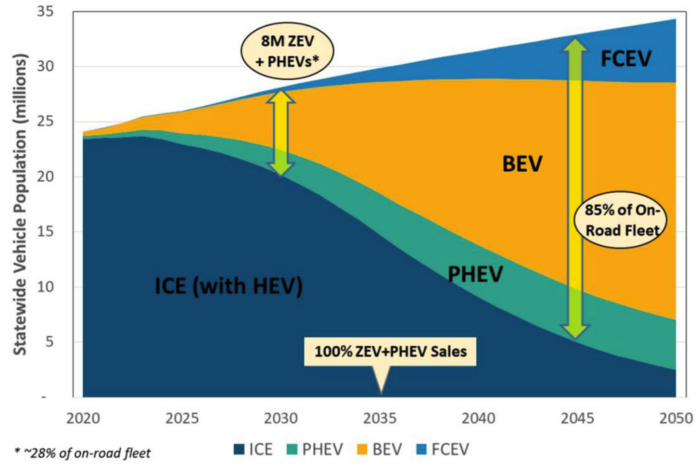 To provide a case to contrast with the 2035 ICE Ban Scenario, Stillwater also projected our best estimate of a market-feasible ZEV migration. Stillwater’s Projected Demand Scenario is essentially the same as CARB’s MSS Baseline scenario.

To determine the potential impact of a successful ICE Ban under the 2035 ICE Ban scenario, we evaluated the impact on various stakeholders. We find:

Under Stillwater’s Projected Demand scenario, ZEV populations would displace 0.5 billion gallons per year (BGY) of diesel and 1.0 to 1.5 BGY of gasoline by 2035, far less than the number stated in CARB’s 2035 ICE Ban Scenario. However, other factors considered in our analysis result in actual demand for diesel to increase by 0.5 BGY and gasoline demand to decrease by over 2 BGY by 2035. This results in the costs added to gasoline and diesel projected to be much lower than the ICE Ban Scenario. This analysis also results in state revenues from taxes and fees declining by $1.5 billion per year by 2050, but revenues from the C&T program increasing dramatically, assuming the program remains in place in its current form.

CARB states their 2035 ICE Ban Scenario does not “reflect a market feasibility analysis.” Stillwater concurs that this scenario overestimates ZEV penetration as it is estimated to be 4.7 times faster than current evidence supports. The costs and demand destruction summarized above are unlikely to be realized. CARB’s more realistic Baseline scenario of 3.2 million ZEVs by 2035 is consistent with recent history.