LUBA found the Amendments as adopted did not comply with land use laws and remanded the case back to the City Council. The City’s Bureau of Planning and Sustainability has largely proposed that the Council readopt the same amendments that LUBA remanded, but with additional findings and analysis for the City Council to consider. The Council will hold a public hearing on June 30 to hear testimony on the Amendments and findings and subsequently vote on the ordinance. These changes will apply to ten petroleum terminals and one LNG terminal in the Portland area.

The zoning amendments restricting tank capacity citywide and at improvements to these terminals will have material impacts on petroleum and renewable fuels supplied throughout the Pacific Northwest, particularly at a time when this supply is in the process of transitioning to lower carbon sources. To better understand these impacts, let’s first describe how fuel is distributed in the Northwest.

Just like in Oregon, there are no pipelines crossing the Cascade Mountain range in Washington. The only connection between the western and eastern regions of the state is marine transport along the Columbia River, between Olympic pipeline terminals on the west side of the mountains, and primarily Pasco, Washington, to the east. Eastern Washington and Oregon are supplied from terminals in Spokane and Pasco, which store products from PADD 4 refineries in Salt Lake City, Utah, and Billings, Montana. Refined products supplied from Billings are delivered to terminals near Spokane via the Yellowstone pipeline and then delivered to Pasco terminals via the Pasco-Spokane pipeline. Refined products supplied from Salt Lake City are delivered to Pasco terminals via the Boise-Pasco pipeline. Products also flow up the Pasco-Spokane pipeline supplying eastern Washington and Idaho, as shown in the figure below. 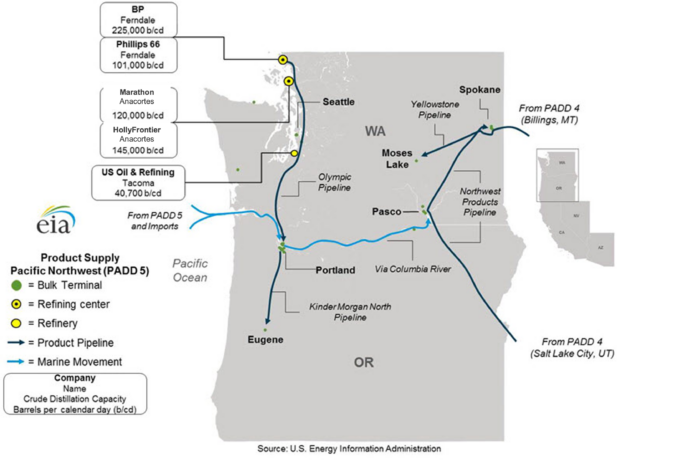 It is important to note that in order to overcome the geographic boundary of the Cascade Mountain range, products can be delivered from the Olympic pipeline by loading ships or barges at the Portland terminals and shipping up the Columbia River to Pasco terminals. From there, they can be delivered by trucks to retail sites. In addition, some of those products can be shipped via the Pasco-Spokane pipeline farther north to Spokane where, again, they are delivered by trucks to retail sites. Trucks from these two areas deliver products into eastern Washington and Oregon, as well as Idaho.

The existing Oregon Clean Fuels Program (CFP) and developing Washington Clean Fuel Standard (CFS), combined with other greenhouse gas reduction initiatives, will transform the transportation fuels used in the Pacific Northwest over the next two decades. After sales of electric vehicles (EVs) and the necessary fueling structure are increased, we suspect demand for gasoline will peak and then decline. EVs will not displace demand for diesel fuel as quickly because the technology is not as amenable for heavy-duty demand, so demand for diesel will continue to increase if the economy continues to grow. However, the diesel pool can be significantly decarbonized by displacing diesel with renewable diesel (RD) and biodiesel (BD). In fact, with the large increase in RD production capacity coming online in the next two years, renewable fuels volumes could increase dramatically and quickly.

Since BD and RD have less energy per volume than diesel, and diesel demand is expected to increase while gasoline demand may stagnate for a couple of years due to the time required to begin turning over the light-duty fleet, fuel demand is very likely to increase somewhat in the short term. In addition, the transition from diesel to RD and BD potentially increases the need for terminal infrastructure in Portland for two reasons: