Several years ago, Parhelion introduced the Platinum Carbon Credit invalidation™ insurance product to the California Cap & Trade market and followed up with the Platinum RINs invalidation™ insurance policy for the U.S. Renewable Fuels Standard (RFS) earlier this year. They have now entered another environmental commodity market – California’s Low Carbon Fuel Standard (LCFS). We, at Stillwater, thought our readers might be interested in Parhelion’s new LCFS insurance product and its underwriting process – the information they used to analyze and rate the invalidation risk in the LCFS market. Below, we offer Parhelion’s explanation of their newest product.

Our background research was that petroleum importers, refiners, and wholesalers are Regulated Parties (RPs) under the LCFS. CARB approved alternative fuels producers can opt-in to the program; these participants are also referred to as RPs. RPs (of whom there were 317 actively reporting in 2018) must meet the established declining targets for greenhouse gas emissions each year.  The criteria by which regulated party status is determined is detailed in s.95481 and s.95483 of the Low Carbon Fuel Standard Regulations.

The LCFS is performance-based and fuel-neutral, allowing the market to determine how the CI of California’s transportation fuel pool will be reduced.  Oil refiners and producers can choose to innovate to reduce the CI of their fuels, buy lower-CI fuels from other producers or trade credits.  Only the RPs are permitted to hold credits and transactions cannot be conducted with an entity which is not an RP.  A fuel producer with deficits must have enough credits through generation and acquisition to be in annual compliance with the standard.   LCFS credits do not have a vintage and do not expire. LCFS credits are generated and issued by the California Air Resources Board (CARB).

The chart below shows the total credits and deficits generated in the LCFS for the four quarters of calendar years 2011 to 2018: 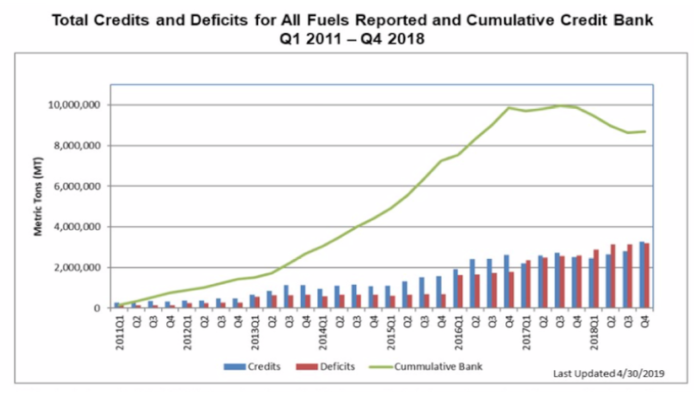 Focusing on the risk of invalidation, we reviewed the enabling legislation: Assembly Bill 32 was adopted in 2006 and LCFS Regulations adopted in 2010.

We noticed that there has been a recent change.  In early-2019, CARB set out a regulatory process for making the market whole, with a hierarchy to be used to determine responsibility in cases of invalidation In § 95495. (Authority to Suspend, Revoke, Modify, or Invalidate- (5) Adjustment of Invalidated Credits or Miscalculated Deficits) that states:

The Executive Officer will seek the following options to address any invalid credits or miscalculated deficits in the program:

(A) First, the Executive Officer may remove the invalid credits from, or add miscalculated deficits to, the account of the credit or deficit generator, or other entity deemed responsible for the invalidation or miscalculation in the final determination pursuant to section 95486. The entity is responsible for returning its account to compliance.

(B) Next, the Executive Officer may choose to retire credits from the Buffer Account to address invalidated credits or uncovered deficits.

(C) After exercising options in subsection (A) and (B) above, the Executive Officer may remove remaining invalid credits from an entity’s account that holds or previously held invalid credits. The entity is responsible for returning its account to compliance.

Next, we reviewed Loss Experience

So, we looked at the Settlements and Account Balance Adjustments in the LCFS system that would enable us to quantify the ‘losses’: 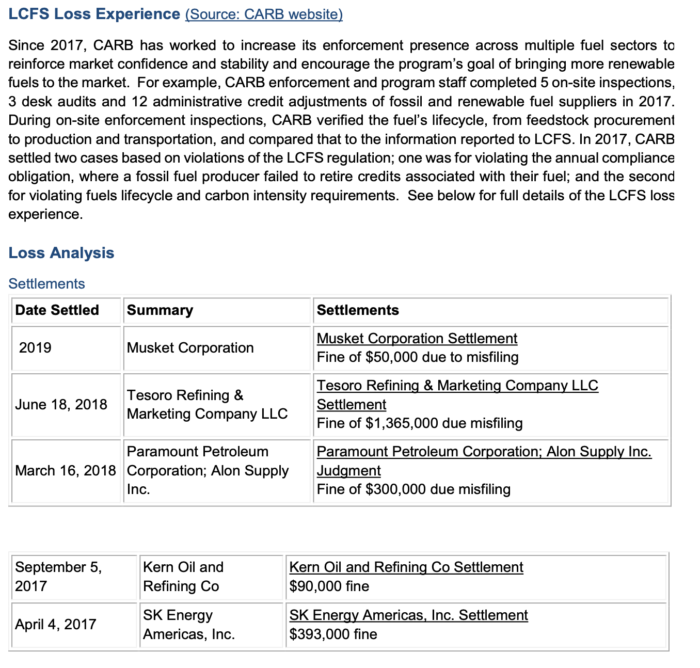 Full details of administrative adjustments to participants’ accounts in the LCFS Reporting Tool and Credit Banking and Transfer System are listed on CARB’s website.  The adjustments reflect corrections to inaccurately reported data discovered through audits or self-reported to ARB.  In some instances the data correction would retroactively improve a company’s credit balance; because the LCFS regulation prohibits such retroactive claim or generation of credits, in such instances credit account balances are administratively returned to pre-correction status.

Based on this research, we determined that we could underwrite and now have designed an insurance policy that: