ANS Feels the Squeeze on the West Coast

October 30, 2014 By Megan Wisdom from the Downstream Wizard 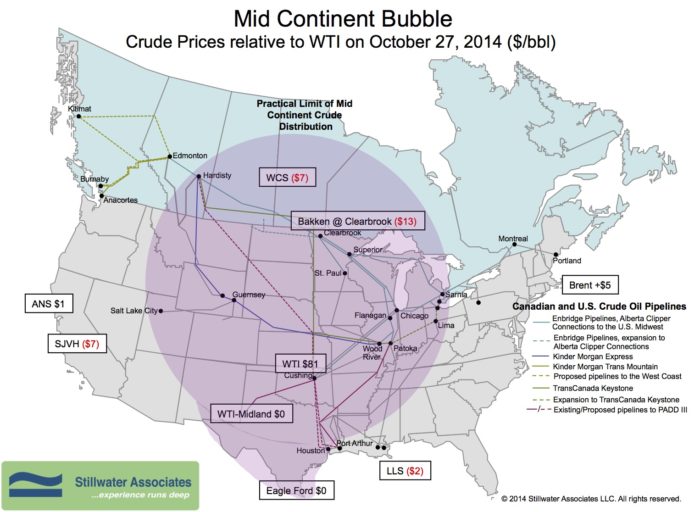 On Monday with WTI priced at $81 per barrel, Eagle Ford and WTI-Midland were listed at parity with WTI. Bakken at Clearbrook came in at $13 under WTI. While the Western Canadian Select differential has narrowed to $7 under WTI.

While we’re seeing discounts in the Mid Continent, prices on the coasts continue to drop. Brent remains $5 over WTI. And on the West Coast San Joaquin Valley Heavy has dropped to a $7 discount under WTI.

The big story is the continued tightening of the ANS-WTI differential. ANS was $1 over WTI on Monday. As we pointed out in last month’s blog, Lone Star State Makes it Inside the Bubble, it looks like ANS is feeling the squeeze on the West Coast. Pacific Northwest refineries are replacing ANS with inexpensive rail supplied crude from the Mid Continent. So where’s the ANS going? Last month ConocoPhillips took advantage of an exception to the export ban and exported 800,000 barrels of ANS to South Korea’s GS Caltex Corp. Refinery. This exception allows the export of crude oil from Alaska that has flown through the Trans Alaskan Pipeline System (TAPS) to Valdez and is transported by U.S. vessel.

The ANS length has also contributed to the collapse of the San Joaquin Heavy differential to WTI as ANS producers struggle to find market share in California. ANS placement will be worth watching as crude-by-rail receiving capacity increase in the Pacific Northwest displacing ANS and imported crudes.