August 9, 2016 By Megan Wisdom from the Downstream Wizard 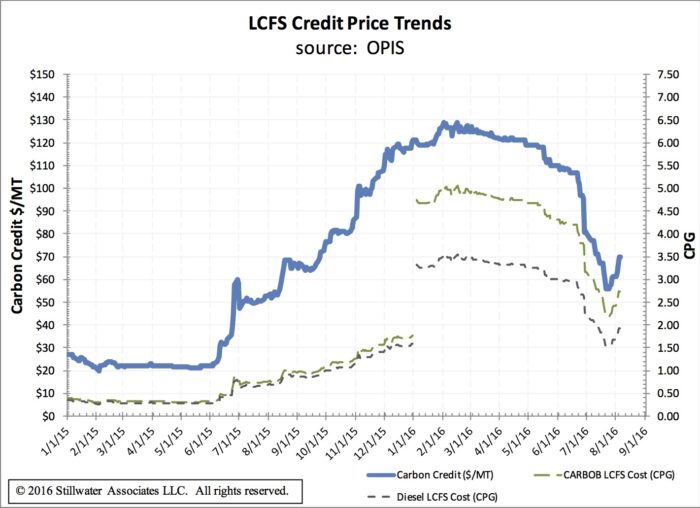 Back in February, LCFS credit prices were trading for about $130 per metric tonne (MT). Prices were fairly steady through the spring, and then something happened in July to make the price drop. LCFS credits lost more than half of their value from February, hitting the $56/MT mark in the last week of July. Prices have rebounded a bit since then to $70/MT on Friday, August 5th. The price drop has caused a lot of discussion at Stillwater. Beyond the simple economics of “there are more sellers than buyers,” what could be causing this small market to crash? Below are a few theories we’re testing:

Most of these theories do not individually seem sufficient to sustain such a fundamentally different market price. The structure of the existing regulation (accelerating increases in obligation over time that appears infeasible before 2020, paired with credits that never expire) should be very constructive to credit prices. It seems most likely that something that could change the structure of the regulation would be required to create such a dramatic change in the market sentiment. Theories 4 and 5 combined fit into this view a bit better than the others.

Regulatory uncertainty has definitely played a role in the RINs market in the past. It is possible that signals from Sacramento have lead Covered Entities to cash out, or at least quit buying. We estimate that the market has lost $500 million in value since its peak in February. We are following the issue in Stillwater’s LCFS Newsletter. Sign up for a subscription to benefit from Stillwater’s insight and analysis in to the LCFS program and credit market.