It gets worse: Pipeline outage in SoCal could cause supply disruptions and push fuel prices even higher!

UPDATE March 4, 2022 @ 8:00 AM: Situation averted. Per OPIS, Kinder Morgan restarted segments of its SFPP pipeline Thursday evening following unplanned maintenance work at the company’s Watson station that had shut down the pipeline on Wednesday.

Gas prices are already sky-high in California thanks to the state’s complex market, unique gasoline specifications, stringent environmental regulations, inflation, and current world events pushing crude oil prices higher. As if that wasn’t enough, a SoCal fuel distribution pipeline is now temporarily inoperable. Kinder Morgan’s (KM) sizeable and important product lines out of Long Beach, California (Watson Station) shut down yesterday evening due to a refined petroleum products release (i.e. leakage or a spill). At this time, there is no estimated restart time for the KM system. Today, we look at how this pipeline outage will impact gasoline, diesel, and jet fuel supply in Southern California and into Nevada and Arizona.

There are five large petroleum refineries in service in the Los Angeles (LA) Area with a total refining capacity of over a million barrels per day. Each large LA Area refinery has dock infrastructure for loading and discharging marine vessels to support imports of crude oil and exports of refined products, as well as rail and pipeline infrastructure to support supply to the Southern California, Nevada, and Arizona markets. 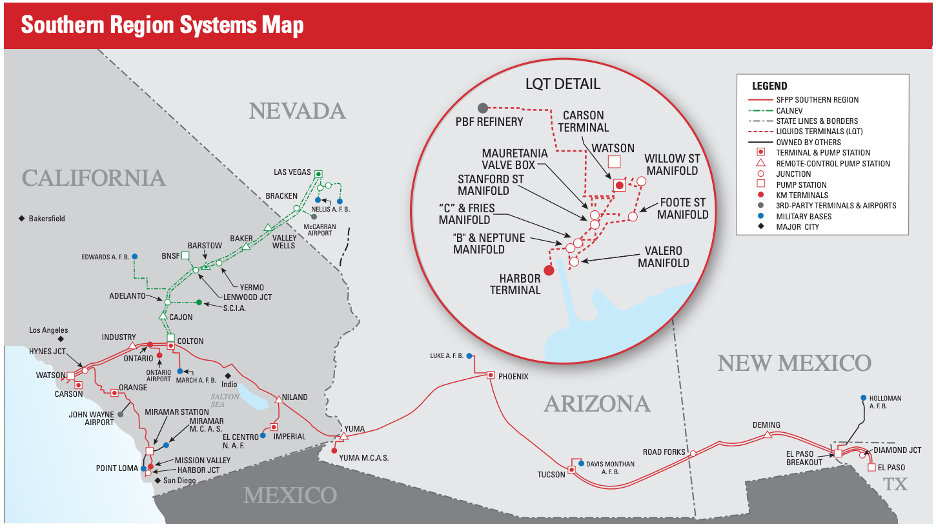 As shown in the figure above, the KM system starts in Carson, CA (the Watson receiving terminal and pump station) and delivers gasoline, jet, and diesel from all the refineries in LA via the South pipeline to Orange County and San Diego, and via the West Line to the Colton Terminal in San Bernardino. The West Line continues east from Colton to supply product to Imperial, Yuma, and Phoenix. From Colton, the Inland Empire, San Bernardino and Riverside are supplied via the adjacent terminals. Product is also piped from Colton via the CALNEV line to Barstow and Las Vegas.

Importantly, the KM pipes from Watson are, practically speaking, the only way of moving finished gasoline, diesel, and jet fuel via pipeline from LA refineries to areas outside of the LA Basin. Inside the LA Basin, there are also local proprietary terminals and pipeline systems, including some that are operated by KM, that supply products locally (e.g. to the San Fernando Valley, Huntington Beach, Montebello), but the refineries rely on KM infrastructure to move a very large percentage of the refinery production. No other product pipeline moves LA refinery production beyond the LA Basin.

As such, if KM remains shut down for longer than a few days, the LA refineries will become “constipated” and must curtail production.

You mentioned Nevada and Arizona; what about them? 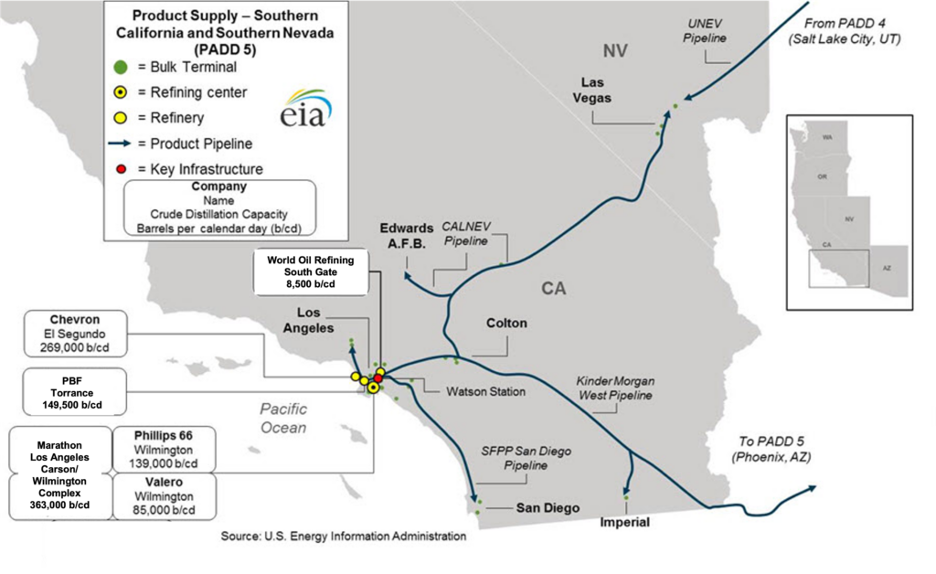 The bottom line: If KM remains shut down for longer than a few days, Colton will run dry and no longer be able to ship finished product to Las Vegas or Phoenix. Both Las Vegas and Phoenix get gasoline supplies from Utah & Texas, respectively, but not enough to cover gasoline demand. Both markets receive all their jet fuel from LA.

Reports indicate that KM’s two West Line pipes (to Colton and from Colton to Las Vegas & Phoenix) and the South Line (to San Diego) are down. According to OPIS, a KM spokesperson confirmed segments of the SFPP pipeline have been shut down, “while cleanup activities continue.”

What does this mean for SoCal, Phoenix, and Vegas?

Without the ability to move product south and east, LA refiners will have to depend on moving product from their proprietary systems by truck to markets to the south and east. The ability for refiners to continue crude runs may be limited by their ability to store the product that otherwise would have moved on the KM system.

The implications for the outlying markets, Las Vegas and Phoenix may become severe as supply on the KM East Line or the UNEV Line cannot make up the volumes lost from KM, and trucking will be required either from the west or east. For San Diego, without the KM volumes, their supply will depend on trucking from the terminals in the LA Basin which are not supplied by the KM pipeline.

In short, if the KM shutdown continues, there could be some serious supply and price disruptions in Southern California, Arizona, and Southern Nevada.

Stillwater’s team will be tracking this issue closely. We plan to report more extensively on the effects of this outage in our next monthly analysis on our West Coast Watch platform.