The West Coast transportation fuels market is often referred to as an island, and refiners in California and Washington face unique market pressures even in the best of times. Geographic isolation, unique gasoline and diesel specifications, and greenhouse gas (GHG) reduction regulations including the federal Renewable Fuel Standard (RFS), California’s Low Carbon Fuel Standard (LCFS) and Cap and Trade (C&T) programs and Oregon’s Clean Fuels Program (CFP) make it costly to source finished petroleum products from outside the region, ensuring that in-region refiners are the primary source of finished petroleum products for the West Coast. Based on these factors and with an eye toward helping stakeholders navigate this difficult market, Stillwater has developed a proprietary index to assess West Coast margins at the refinery gate. The West Coast Watch Refining Margin Index is designed around the market enclaves (Southern California, Northern California, and the Pacific Northwest), the typical crude run in West Coast refineries, the cost of compliance with GHG-reduction regulations, and the local refined product prices. This tool provides trends for the refining margin along the West Coast, and we hope our readers will find it instructive. 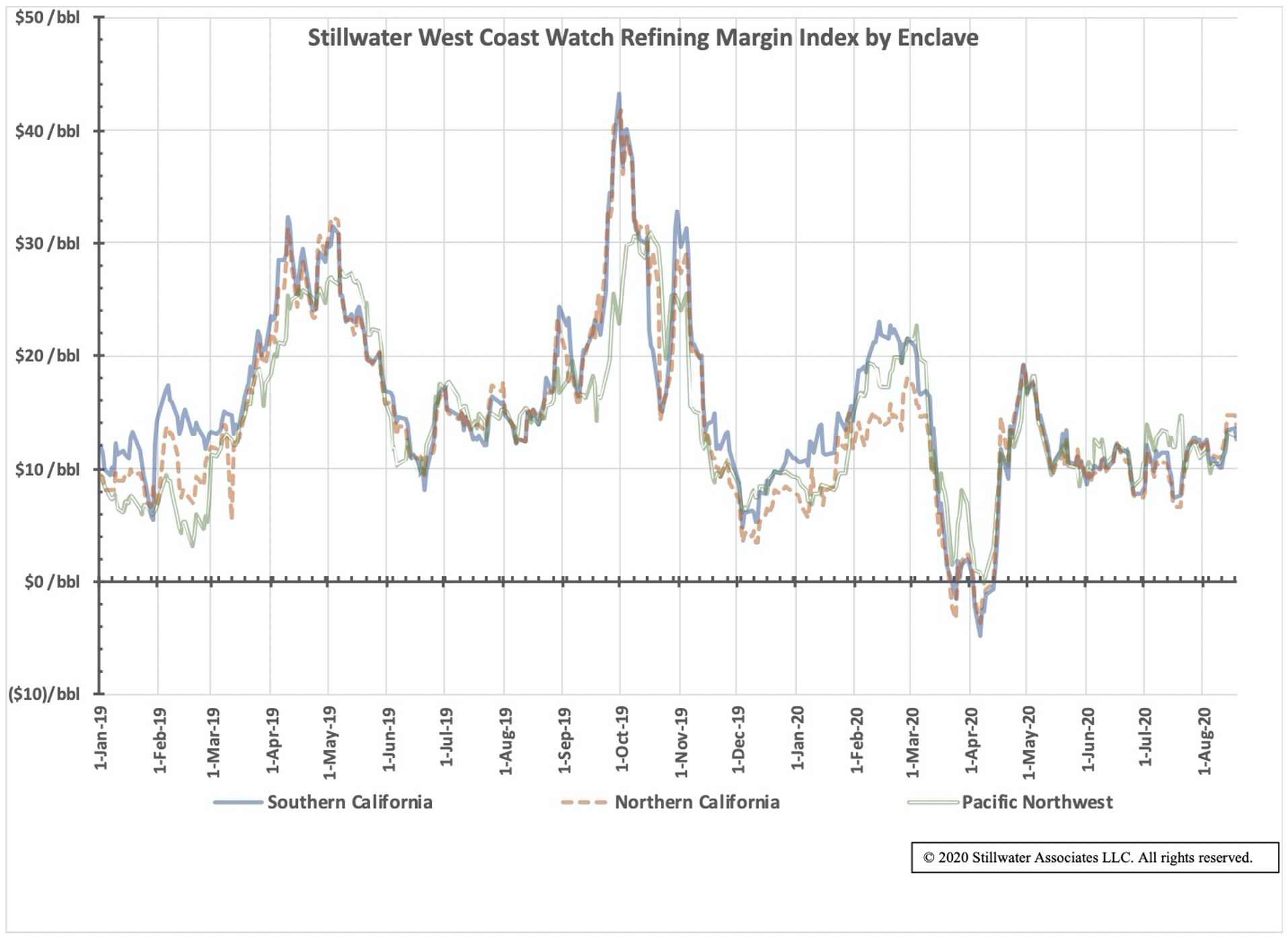 West Coast Refining Margins are Ugly
In general, as can be seen from our West Coast Watch Refining Margin Index, margins for the three enclaves follow similar patterns. The chart above shows the seasonality of the market with the index dropping in the winter, building through the spring, falling off again in the late summer, and building up in the fall. This year, the indices peaked in Southern California on February 13th at $22.95 per barrel (bbl). The Northern California index peaked later in the month on February 28th at about $18.00/bbl. The PNW index peaked on March 2nd at $22.60/bbl. The beginning of the COVID-19 pandemic can be clearly seen after that peak as California announced its stay at home order on March 20th and Oregon and Washington followed suit on March 23rd. The refining index dipped into negative territory on March 24th, saw a slight recovery, and then cratered again into negative territory the week of April 3-9. Marathon announced they would temporarily idle the Martinez refinery on April 27th. On that day, Northern California margins had improved to $16.70/bbl. At the end of July, when Marathon announced the permanent closure of the Martinez refinery, the Northern California index had decreased to $11.80/bbl.

Looking at the bigger picture and adding some historical context, we can see just how ugly the shutdown has been for West Coast refiners. The chart below shows the five-year average index range for all three enclaves along with the trends for 2019 and 2020. The first quarter of 2020 was clearly an improvement on 2019. However, at the bottom of the dip (around April 6th) the average index was -$3.10/bbl, a 112% loss from the $25.90/bbl index on the same day in 2019. The summer has seen some improvement as the 2020 indices have edged closer to the bottom of the five-year range. Last week, the indices hit about $13.00/bbl, a 7% loss from the same week in 2019 at $14.00/bbl. 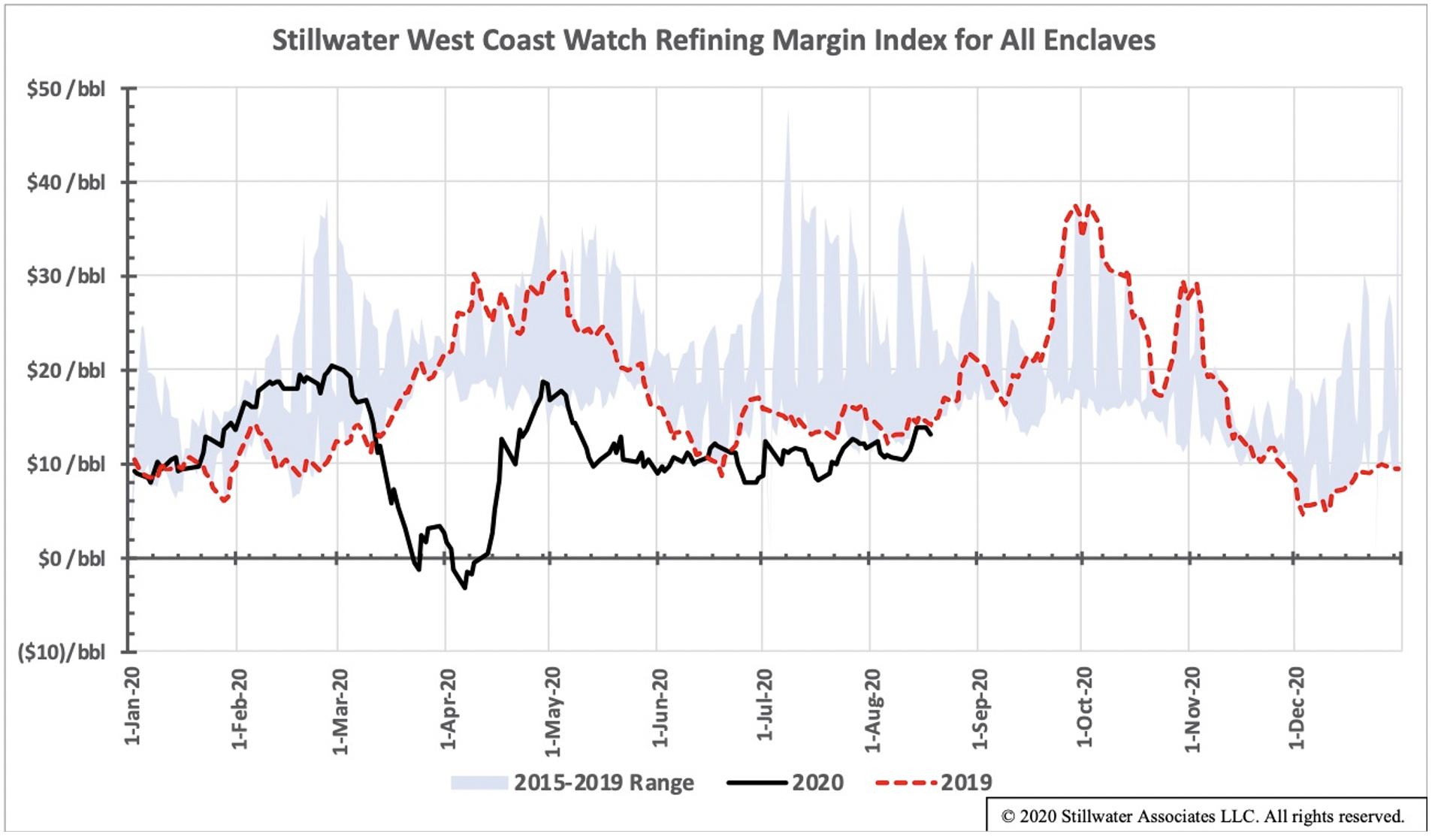 Demand Destruction is Driving Margin Collapse
The steep decline in demand caused by the pandemic is driving refining margin collapse and shaking up the refining environment in California. Less than two weeks after Marathon’s announcement regarding the Martinez refinery shutdown and conversion to renewable diesel production, Phillips 66 made its own announcement about its plans to convert the Rodeo refinery to 680 million gallons per year of renewable diesel, renewable gasoline, and sustainable jet fuel by 2024. They also announced plans to shut down the Rodeo Carbon Plant and Santa Maria refining facility in 2023.

Will there be more such announcements to come? It all depends on what happens with demand. The demand trend is illustrated by PADD 5 gasoline demand data provided by the EIA. Demand for gasoline in PADD 5 continues to improve since Dave Hackett last reported on the topic back in July. Demand bottomed out in mid-April due to the pandemic, hitting about 52% of the same week in 2019. Since then, gasoline demand has improved from 84% of 2019 volumes at the end of June. July 4th weekend saw even further improvement at 1,434 thousand barrels per day (kbd), or 89% of the same week in 2019. The week of August 7th saw a slight drop from that high at 1,424 kbd, or about 87% of the same week in 2019. The improvement can be seen in the figure below. 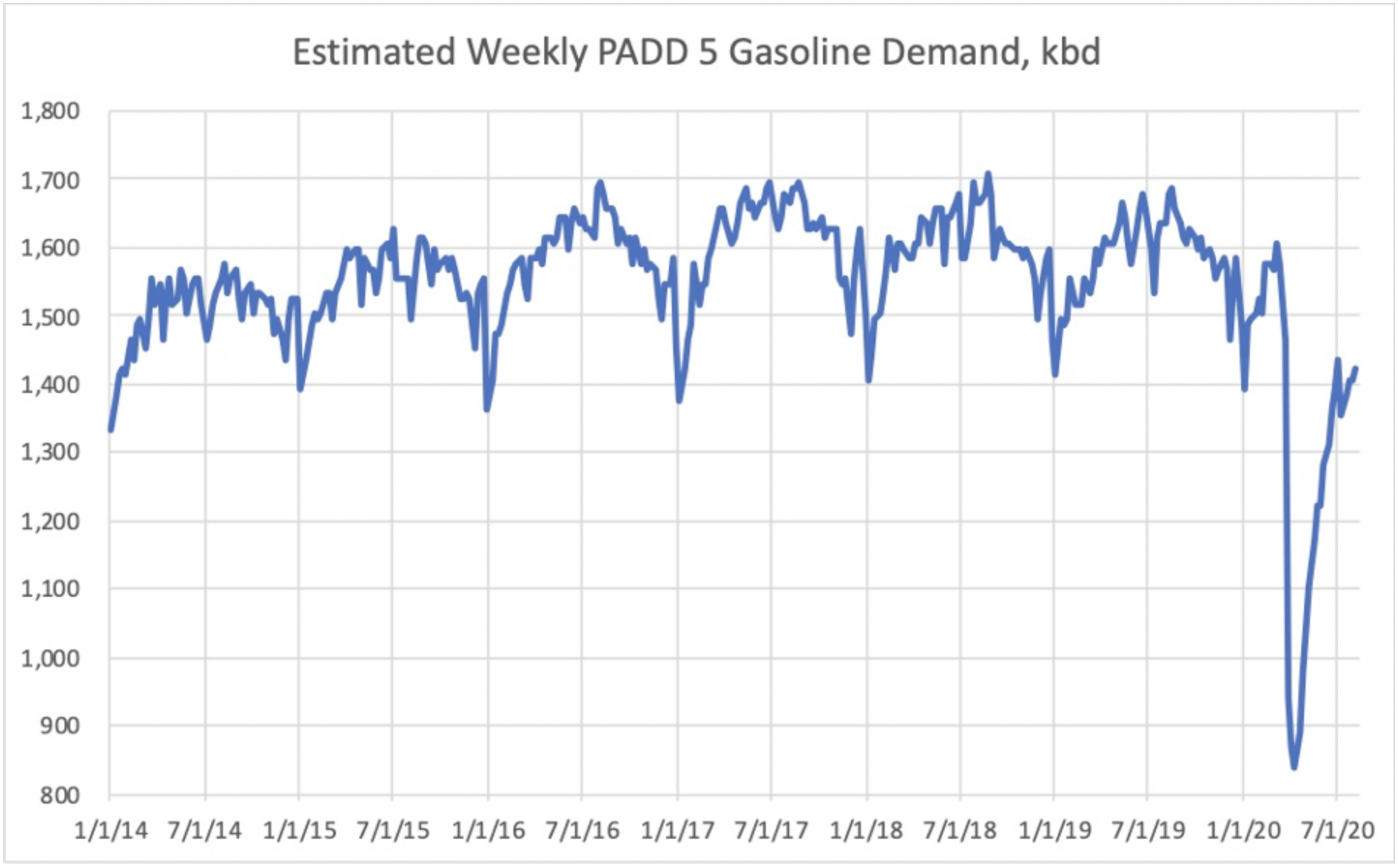 We may be seeing the top of improved demand during the pandemic. Stillwater’s view is that gasoline demand will recover in 2021, but at about 90% of EIA’s 2020 Annual Energy Outlook forecast for the year. Jet fuel will struggle to recover, only returning to about 65% of forecasted demand. Against a history of high capacity utilization for the West Coast refineries, the outstanding question is whether the level of demand will be sufficient to keep existing refineries running at a high enough utilization to improve the margins. We’ll be keeping an eye on this space in our West Coast Watch.