How does the cost of Hydrogen stack up against gasoline?

Hydrogen fuel cell vehicles (FCV) are zero emission vehicles (ZEVs) which comply with California’s ZEV mandate and internal combustion engine ban. One challenge facing FCVs is the high fuel cost – due to hydrogen’s unique physical properties. High gasoline prices beyond $4.00 per gallon have recently made it into headlines nationwide; meanwhile, since 2014, hydrogen in California has retailed for approximately $14.00 per kilogram (kg), which is equivalent to $14/gallon gasoline. According to hydrogen advocates, FCVs’ high fuel economy helps keep FCV fueling costs competitive with gasoline-fueled vehicles, and that future hydrogen fuel cost will be lower due to higher volumes or greater economies of scale.

Let’s look at the data to see whether FCV fueling costs really fall in line with gasoline. The figure below displays fuel cost per mile using California’s historic gasoline and hydrogen retail prices to show the fuel cost per mile for FCVs and gasoline vehicles. According to the U.S. Environmental Protection Agency (EPA), 2022 Fuel Economy Guide the average fuel economy of a FCVs is 60 miles per kg (mpk). On average, gasoline cars get 30 mpg and midsize gasoline hybrids 42 mpg. As can be seen in the figure, FCV fuel cost is three times higher per mile than a gasoline hybrid and two times higher than that of a conventional gasoline vehicle. To be competitive with hybrid gasoline vehicles on a per-mile basis in 2021, hydrogen needed to have been priced at $5.88/kg; hydrogen retailed at $16.50/kg that year. 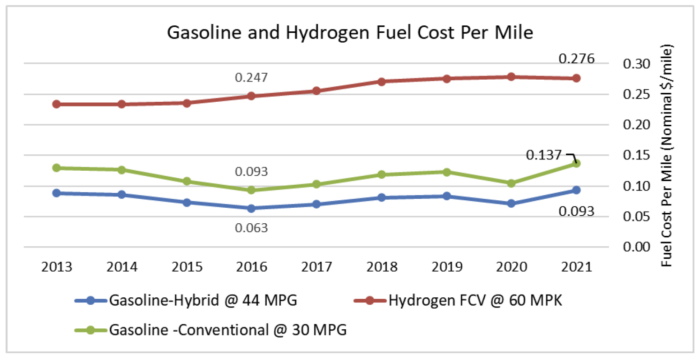 The California Air Resources Board (CARB) and Washington state’s Department of Ecology (DoE) indicate that hydrogen fuel retail prices will be lower in the future than they are today. These claims defy historic trends of a similar gaseous fuel – compressed natural gas (CNG), which has been retailed in California for over 27 years. Given our 20-years’ experience evaluating each cost component required to retail hydrogen for FCVs, and all the inherent uncertainties and assumptions involved. We chose a simpler more transparent method to illustrate potential hydrogen retail price trends, almost absent governmental intervention. CNG has similar physical properties to hydrogen, albeit at a lower cost than hydrogen to distribute and compress. One can estimate hydrogen retail prices from the last 25 years of utilities’ (PG&E) natural gas purchase costs and compression expenses to retail CNG prices. With small adjustments, hydrogen retail prices can be derived from CNG prices by adjusting for higher hydrogen pressures, 80% methane-to-hydrogen conversion efficiency, and compressing 408 cubic feet (ft3) of hydrogen gas vs 100 ft3 of methane.(1)

Importantly, research goals of future lower hydrogen cost are made for uncompressed hydrogen; these claims correspond to hydrogen production cost only, which makes up less than 20% of hydrogen total retail cost – compression, and delivery make up the bulk of the retail cost. In 2021, hydrogen retailed $8.50/kg to $10.80/kg higher than gasoline prices matching the same fuel cost per mile for hybrids or conventional gasoline vehicles respectively. Hydrogen has been used commercially for over 80 years, so it is well developed. Stillwater Associates knows of no research or pending breakthroughs sufficient to bridge hydrogen’s two to three times higher fuel cost compared to gasoline vehicles.