On June 25, 2020, the California Air Resources Board (CARB) adopted the Advanced Clean Trucks (ACT) rule which seeks to accelerate the adoption of zero-emission vehicles (ZEVs) in the medium-and heavy-duty truck sector and reduce harmful emissions generated from on-road mobile sources. Medium- and heavy-duty vehicles include the largest and heaviest pickup trucks and vans, all trucks up to and including the largest semi-trucks. This rule facilitates CARB’s policy goal of reaching carbon neutrality in California by 2045. The ACT rule requires on-road ZEV and near-zero-emission vehicles (NZEV)[1] to be delivered for sale in California in increasing volumes over the next decade and beyond. Off-road vehicles are excluded from the ACT rule.

The ACT rule requires an increasing percentage of new vehicle sales to be ZEV and NZEVs, as shown in Table A-1, below.

The Weight Class Modifier was developed because of varying levels of ease for selling ZEVs and NZEVs in each class of truck as well as varying volumes of trucks sold across classes. For example, given that batteries hold a limited amount of energy and require fairly lengthy recharge times, it will be easier to sell ZEVs in the smaller truck category than in the long-haul, heavy-duty truck category. Smaller trucks, however, are sold at significantly higher volumes relative to large trucks, making any percentage increase in sales of ZEVs and NZEVs a heavier burden by volume for the light-duty class. CARB’s Weight Class Modifier reduces this volume for the light-duty class. Conversely, to comply with the regulation, a manufacturer can make one Class 8 tractor and get twice the ZEV credits as the Class 4-5 Trucks, or 3 times the credit as the Class 2b-3 trucks.

Starting with the 2024 model year, a manufacturer will incur annual deficits based on their annual volume of non-ZEV truck sales. These deficits must be matched with a minimum of the same number of ZEV and NZEV truck production credits. Deficits are calculated for each model year as the product of the annual ZEV percentage requirement multiplied by the Weight Class Modifier and the non-ZEV truck sales of a given producer. Low-volume manufacturers (those who sell an average of less than 500 vehicles annually in California) are exempt for the ACT ZEV sales requirements.

The ACT rule does not include any penalty for manufacturers’ failure to meet the ZEV sales targets. Manufacturers may only be penalized for not reporting sales.

Impacts on Diesel Demand
So, how will the ACT rule impact future diesel sales in California? Given the uncertainty around which trucks will be replaced with ZEVs and for which use-cases, there is some lack of clarity around how much diesel will be displaced by the ACT rule. However, we can make an educated estimate. 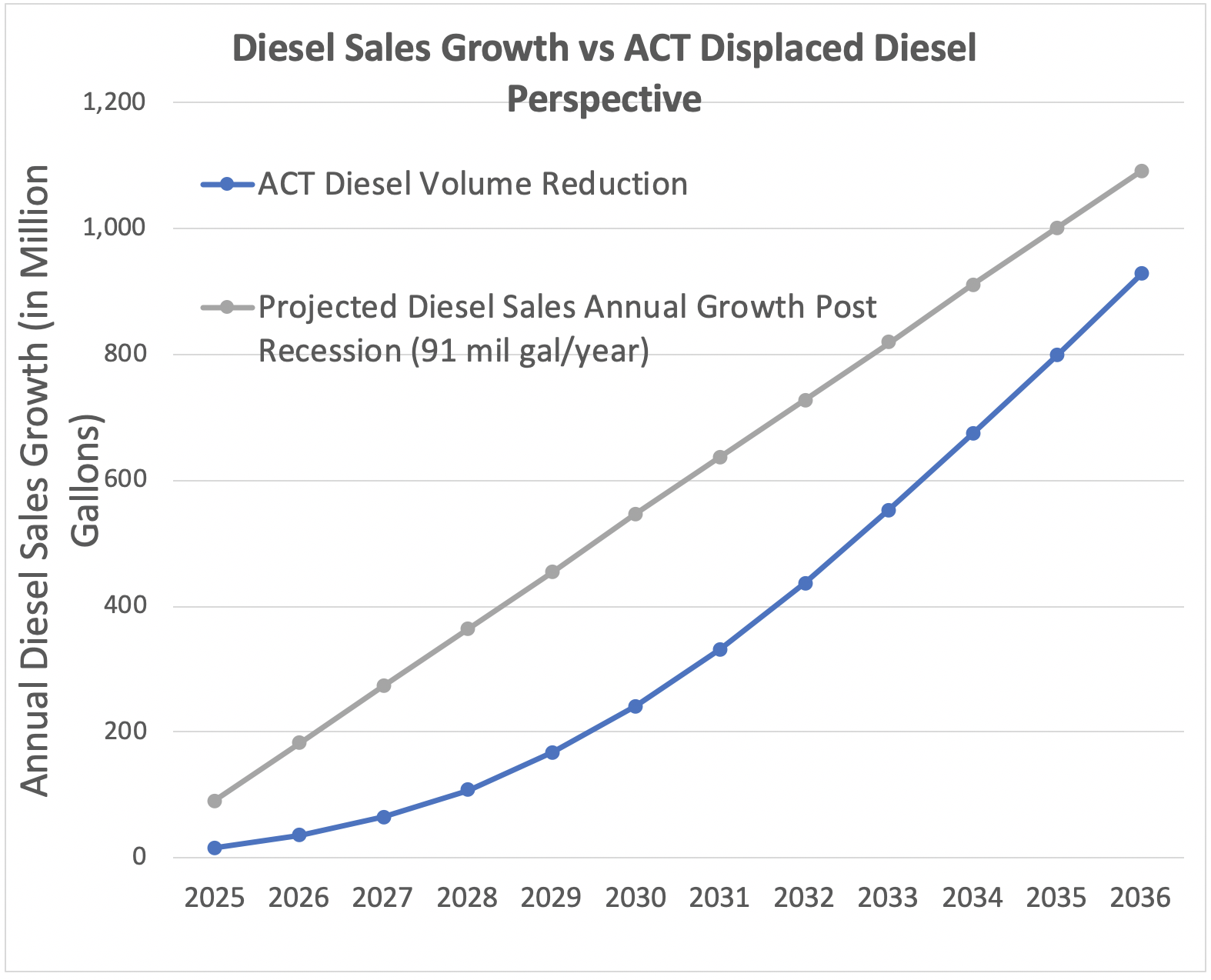 ZEVs’ diesel displacement is optimistically calculated by assuming that ZEVs displace the average diesel-consuming vehicle. Due to ZEVs’ limited battery storage capacity and limited driving range, however, ZEVs tend to displace vehicles with below-average vehicle miles traveled. By 2036, nominal diesel sales volume would grow by 1 billion gallons, and the ACT rule could reduce 925 million gallons. As such, the ACT rule could lead to a five percent overall diesel fuel displacement by 2030 and a 17% diesel displacement by 2036. This projected ACT volume change is well within the expected diesel sales growth by 2036. As adopted, the ACT rule will not materially impact Renewable Diesel (RD) demand through at least 2036. Other CARB policies such as the Low Carbon Fuel Standard (LCFS) will continue to be a key RD demand driver.

Questions about the ACT or diesel demand projections? Contact us to learn how Stillwater can help.

[2] Diesel fuel sales impacts lag by a minimum of a year and a half for heavy-duty diesel model year sales due to summer/fall engine productions, and vehicle assembly required for most all medium- and heavy-duty vehicles.