California’s gasoline prices were often in the news in 2015 and the trend will continue in 2016. Dave Hackett of Stillwater is one member of the California Energy Commission Petroleum Market Advisory Committee which continues to look into the gasoline prices in California. A topic of discussion at the last PMAC meeting was the February 2015 ExxonMobil Torrance Refinery Electrostatic Precipitator explosion, and subsequent (and ongoing) reduced gasoline production that has been a factor in the sustained higher than normal price difference between California and the rest of the U.S.

Based on recent occurrences in the market, we see the possibility that gasoline prices could again spike this Spring. As the chart below shows, the inventory of gasoline on the West Coast, much of which is in California, normally peaks in January and then declines. 2015 inventories began the year in typical fashion. However, after the Torrance refinery outage in February stocks fell precipitously. Gasoline was imported from all over the world to maintain inventory at about 28 million barrels (mb) which supports reliably meeting consumer demand. At the end of a typical year, gasoline inventories increase in November and December, peaking in January. However, this typical inventory build has not happened this winter. 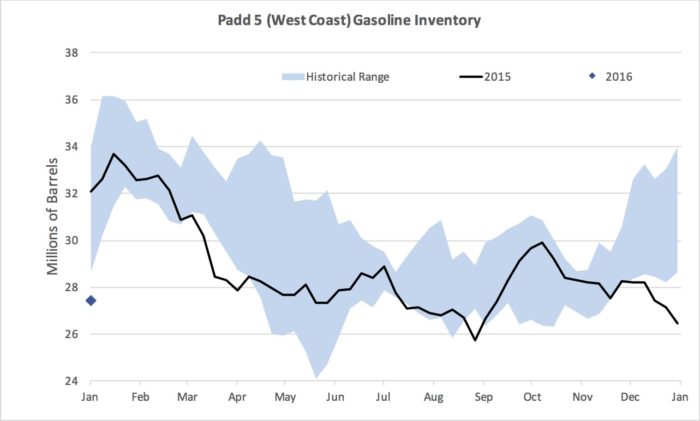 Note the blue diamond showing the latest inventory – well below where it was a year ago. What has caused this? In addition to the ongoing ExxonMobil outage, there were numerous reports of other gasoline producing unit downtimes in December 2015. All signs point to the January peak in the inventory being much lower this year than in the past.

However, the impact of this could be even more significant. The typical winter inventory build normally includes a large portion of low volatility gasoline components used for summer gasoline production. The following chart displays the seasonal maximum gasoline volatility specification for Los Angeles area refineries, measured as Reid Vapor Pressure or RVP. 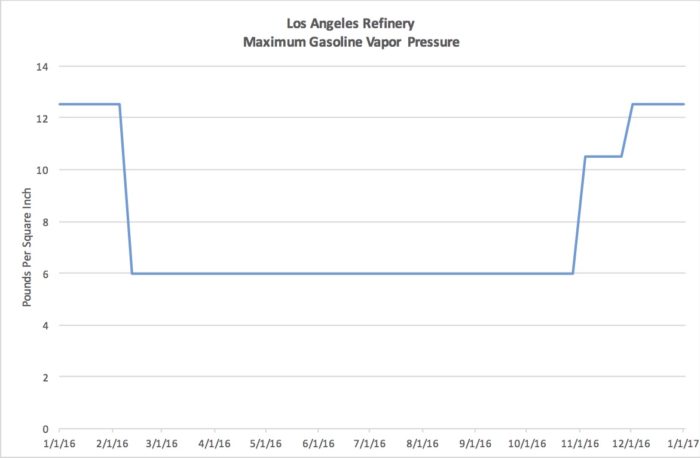 The high maximum winter RVP specification allows refiners to blend in high RVP stocks, particularly butane into gasoline. This allows refiners to save low RVP stocks such as alkylate or reformate for blending when the large drop down in the maximum RVP occurs in February. The conversion process requires gasoline to be blended below the February maximum RVP specification of 6, to offset remaining high RVP gasoline in tank bottoms. Large volumes of the low RVP stocks are required for this process, and are a factor in the normal gasoline price increases seen every Spring. However, the numerous December gasoline producing unit outages limited production of these stocks, and the ongoing ExxonMobil outage will also continue to limit low RVP stocks. Thus the volume of these stocks available in February could be well below normal, and further crimp gasoline output during the conversion from high RVP to low RVP gasoline.

We are seeing the industry react to this – there have been reports of cargoes of low RVP blending stocks en route to California in January. Imports will help in the short-term, but will also reduce availability of these stocks later this year, when they will likely be needed with the ExxonMobil outage now possibly extending until mid-year. As a result the higher than normal price difference between California and the rest of the U.S. will very likely persist, and may even increase during the next six months.