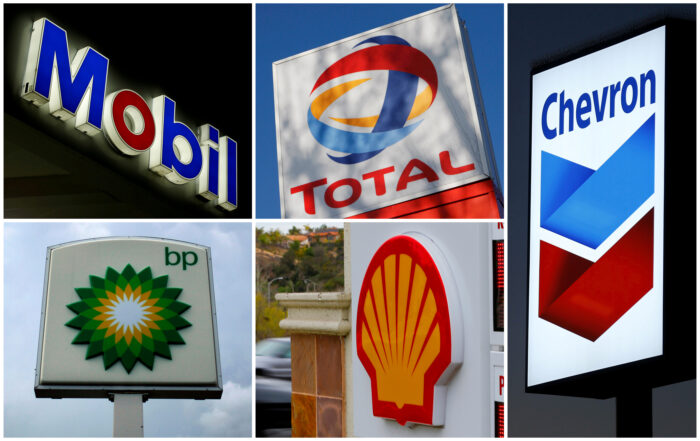 Three major issues have dominated media coverage lately associated with an “existential threat” to humanity: the Covid-19 pandemic, climate change, and the war in Ukraine. Medical science seems to have kept up with the rapidly evolving Covid virus and offers visible hopes for defeating or at least containing it. Some activists see climate change as the preeminent existential threat to humankind that must be abated at any cost. The reemergence of nuclear threats has many people anxious about the horrors of a nuclear holocaust.

One thing all three issues have in common is a relationship to energy. The pandemic caused a sudden decline in energy demand which caused significant declines in U.S. oil production. Climate change activists cheered the reductions in supply and the industry’s refocus on renewable energy, but the easing of the pandemic has caused demand for fuel to increase beyond supply. This shortage has caused fuel prices to increase dramatically, while the situation in Ukraine has led the European Union to seek fossil fuel sources other than Russia, its current largest supplier.

This complex and chaotic situation has led to much higher gasoline prices at the pump in the U.S. Some have placed blame for this price hike on “Big Oil,” claiming these companies stopped investing in oil production post-Covid or colluded in “non-competitive behaviors” to raise the retail price of gasoline. Others have blamed the Biden administration for barring oil pipelines from being built and federal lands from being leased to oil companies. Still others blame the increase in fuel prices on climate change activists who are pressuring oil companies to divert investments from petroleum to renewable sources of energy. In this article, we will assess these and several other claims and explain the real-world causes of high fuel prices.

Are large oil companies the cause of current high prices either due to non-competitive behavior in retail gasoline markets or by not drilling for oil on federal tracts they have leased? First, let’s look at potential non-competitive behavior. When gasoline prices have risen in the past, federal and state officials have frequently called for investigations by Attorneys General into illegal price fixing by oil companies. In 1961, twelve oil companies were found guilty of price fixing that violated the Sherman anti-trust act, and in 1977 five companies were found guilty of similar behavior. Since there are many more state than federal jurisdictions, many of the investigations have taken place at the state level. However, federal investigations have also been carried out frequently by the U.S. Congress and by administrations of several presidents – including George W. Bush and Barack Obama –with very few convictions. (A search of the legal library for Cases and Proceeding for the Federal Trade Commission for gasoline price fixing resulted in 184 cases and proceedings listed.)

Today, investigations are being called for across the U.S. Four weeks ago, the Massachusetts Secretary of Commonwealth called “for an investigation into whether gas and oil companies are price gouging.” Congressman John Garamendi led a group of 32 Members of Congress calling for an investigation, and President Biden announced “a crackdown on these companies overcharging American businesses and consumers,” and called on the Federal Trade Commission “to consider whether illegal conduct is costing families at the pump. ” On April 6th, “oil executives from six companies will testify on high gas prices before the House Energy and Commerce Committee.” Overall, very few instances from these hundreds of investigations have resulted in proof of illegal actions or convictions. Time will tell if these investigations result in any charges or convictions, but the long history of these efforts suggests this is unlikely.

A second claim being made about oil companies is they are drilling less oil than previously on federal tracts they have leased. The implication is oil companies are intentionally reducing production to reduce supply and elevate prices. Figure 1 below shows the dramatic reduction in U.S. crude production in 2020 due to the sudden reduction in petroleum product demand. Crude oil prices went negative briefly in 2020 resulting in over 100 bankruptcies (46 exploration and production companies and 61 oil-field service companies) in the oil and gas industry. The result of the dramatic effects of the pandemic was oil companies shut in production until prices recovered to levels where they could profitably resume some production growth. However, growth has not returned to levels observed pre-Covid as many companies are instead paying down debt to prevent additional bankruptcies. If prices remain relatively high, crude production growth should eventually approach prior levels, but with so many companies closed and others financially reeling from the 2020 price collapse, we expect recovery to take some time. 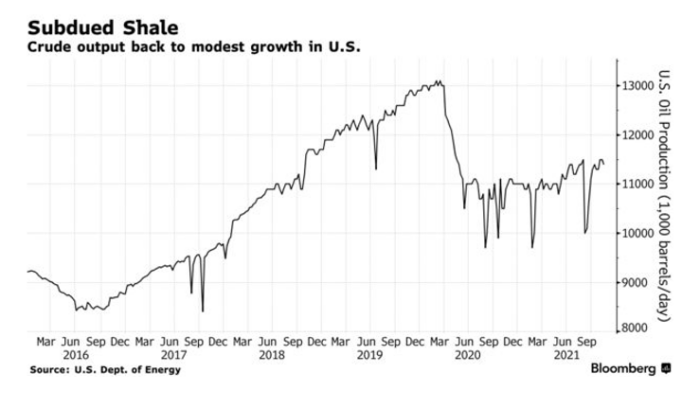 Overall, Stillwater finds that the claims that “Big Oil” is responsible for the recent increases in gasoline prices are not borne out by the reality of the present situation.

What about the claim that recent U.S. government policies are the cause of higher prices? More specifically, have Biden’s cancellation of the Keystone Crude Pipeline Project, reduction of acres allowed for bid to produce petroleum, or discouraging oil production in the U.S. in order to address climate change caused fuel prices to soar? In general, it is very difficult to make the case that U.S. government actions can impact crude oil prices in the short term. The Keystone Project, for its part, would not have been completed in time to make a difference in the current situation. Similarly, federal lands could have been opened to auction by the Biden administration would not be in production today, and only 48% of the acres currently leased by producers were producing oil and gas when the pandemic began. Overall, claims that the federal government caused these higher prices are not supported by evidence.

Some have claimed the Biden administration actually acted to alleviate high prices by releasing 1 million barrels of oil per day for 180 days from the U.S. Strategic Petroleum Reserve – managed by the Department of Energy – on March 1st. However, since global demand for crude oil is currently 100 million barrels per day, this volume released only represents about 43 hours of global oil demand. While such a release might make a small difference to local supply in part of the U.S., it clearly is much too small to impact the global market.

If “Big Oil” and the Biden Administration are off the hook, who is to blame for high fuel prices? A recent article in Forbes attributed higher prices to three factors entirely unrelated to U.S. government actions: rising global oil prices, loss of refining capacity, and the transition to summer gasoline. Another article in the New York Times discounted the impact of current administration policies highlighting instead the facts that the price of crude oil is set by a global market, fluctuations in gasoline prices reflect fluctuations in the global crude price, and U.S. policy has little impact on world oil prices and virtually none in the short term.

Big Oil is not responsible for the recent increases in U.S. gasoline prices. The impact of the pandemic rapidly reduced demand for petroleum products forced closure of crude production and refining capacity that is difficult, and sometimes impossible, to bring back online. As they have so often done in the past, investigations into price fixing have not yielded any evidence of collusion. The consolidation in the U.S. Oil and Gas industry has reduced capacity but has also financially strengthened the surviving companies which ought to be beneficial for future growth.

Recent policies and decisions of the U.S. government are not responsible for the recent price increases and not likely to alleviate the situation in the short term. Longer term, the situation is a bit different. Discouraging domestic crude production in the long term could create upward pressure on global crude prices requiring increased production elsewhere which will give OPEC more influence over global prices. Similarly, encouraging domestic production can have some influence in the longer term on global crude prices because the U.S. is the world’s largest producer of crude. The 3.5 million barrels per day growth in U.S. production between 2016 and 2020 placed pressure on OPEC and helped keep crude prices significantly lower than they would likely have been otherwise. It also helped the U.S. become essentially energy independent, which has historically been an important consideration for economic and global strategic interests.

Interestingly, very few people note the fact high oil prices are a benefit to climate change abatement. As prior Stillwater articles pointed out, the cost to decarbonize diesel fuel and jet fuel in California is very high. Higher petroleum prices reduce the net cost of decarbonization. High fuel prices could also have a positive net impact on the U.S. economy if petroleum production is pursued in tandem with renewable energy production, as pointed out in a recent Wall Street Journal article. However, the most important fact in this discussion has only become part of the conversation recently is high energy prices differentially impact low-income people, both in and outside of the U.S. Whether it is caused by crude oil supply and demand or decarbonization, effectively dealing with this issue is key to a successful energy transition.