Of the technologies which will help to achieve energy transition goals, carbon capture and storage (CCS) is technically proven, has a long history of use in the oil industry, and yet has had little impact on atmospheric CO2 emissions. The U.S. began incentives for CCS in 2008, with the 45Q tax credit, but until recently there have been relatively few commercial-scale projects. Today, we are on the cusp of a wave of CCS projects, and the oil industry is a key contributor. A confusing set of circumstances, but not without explanation – read on!

CCS and its History of Use

CCS, in its basic form, is the capture of CO2 and removal from the atmosphere for long-term storage. There are several variations on capture and storage. However, most large-scale CCS involves CO2 separation and purification at industrial facilities, with pipeline transportation to a location where it is injected and permanently stored in deep underground geologic formations.

The following figure illustrates the variations in pathways – that is, the sources of CO2 and different ways to transport and store the CO2 in geologic formations. While all of the pathways shown are in use today, the majority of historic CCS activity has been in the oil industry for “Enhanced Oil Recovery” (EOR). In this pathway, the oil industry captured CO2 and then injected it into aged oil reservoirs for the purpose of increasing the total amount of oil that can ultimately be recovered from the reservoir. 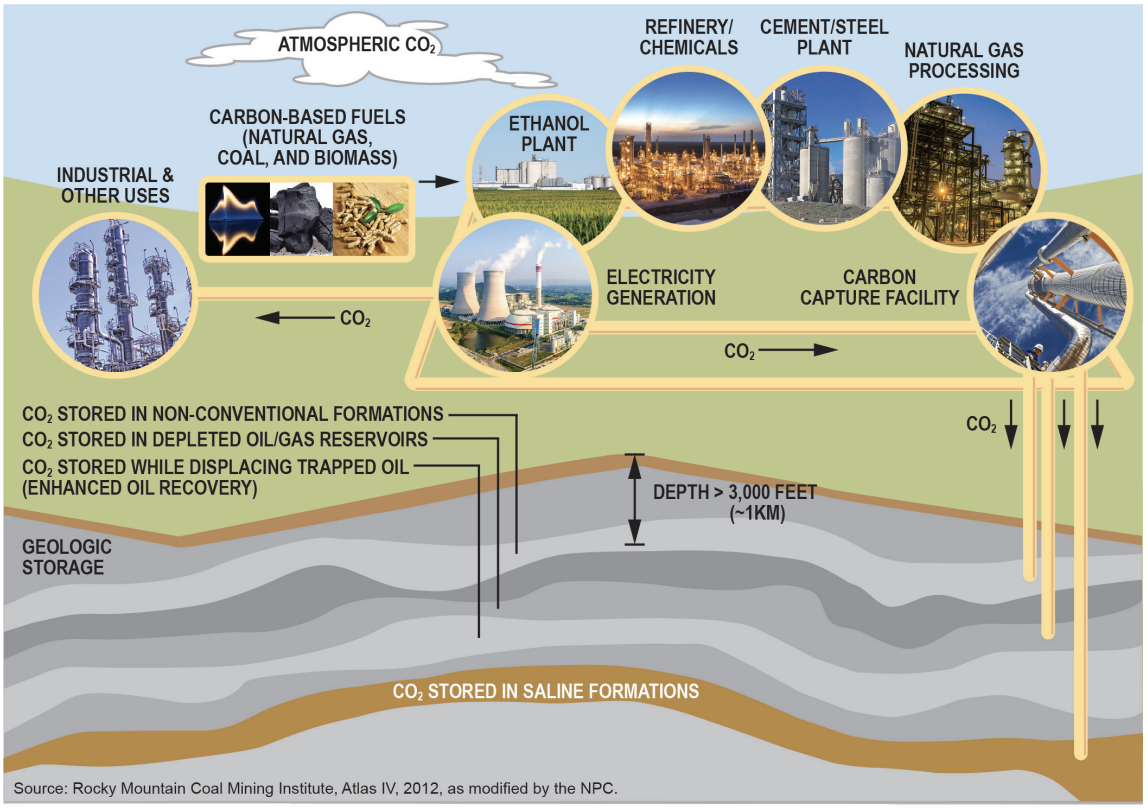 While EOR is technically proven and has been in use since 1972, it has not made significant contributions to reducing atmospheric CO2 concentrations. This is because, until recently, there were no CO2 sources near oil fields, so the industry sourced it from naturally occurring underground CO2 deposits.

Today, however, there are 19 industrial-scale CCS projects operating worldwide, with a total capacity of ~32 million metric tons (MT) of CO2 per year. With the U.S. alone having over 6,500 large stationary sources emitting approximately 2.6 billion MT of CO2 per year across multiple industries, clearly industrial scale CCS is at the earliest stages of technologic development and deployment.

There are many mechanisms available for governments to help de-risk the development of early-stage technologies or to otherwise encourage CCS development. For the energy-transition, there is believed to be more than 3,500 policies at the local, state, and federal level that are intended to address a range of issues from energy efficiency to renewable energy and biofuels deployment. The Section 45Q tax credit, however, is believed to be the most impactful in terms of industrial CCS development. So, what is the 45Q tax credit, and what makes it so potentially effective at incentivizing CCS projects?

The 45Q federal tax credit was initially offered in 2008, and included the following provisions:

The initial plan had some measure of success in that during the years from 2010 to 2019, ten taxpayers claimed 99.9% of the of all 45Q available credits. There were, however, several criticisms of the initial plan, and in 2018 the Bipartisan Budget act of 2018 implemented a number of changes to the 45Q tax credit, including:

These changes certainly improved the incentives, yet there still were uncertainties that inhibited project development. These were largely cleared with a 2020 guidance issued by the U.S. Department of the Treasury and the Internal Revenue Service around “Qualified Facilities,” which is similar to those used in wind and solar project development. This 2020 guidance clarified several items, including:

With these revisions, the 45Q tax credit is viewed to be a world-leading incentive for CCS development. In the U.S., as of 2020, there were 59 facilities in various stages of development with a capture capacity of more than 127 million MT/year. While we are still at early stages with scaling up to commercial feasibility of CCS, this technology will almost certainly play an important role in the energy transition.

Want to know more about 45Q or CCS? Contact us to learn how we can develop a bespoke consulting arrangement to meet your needs.