With the recent increase in gasoline prices in California (the retail gas price average just bumped up over $4 per gallon) and renewed interest in this subject, we thought it timely to present an overview of the major components of what goes into the price of gasoline at the pump. The U.S. Energy Information Administration (EIA) and the California Energy Commission (CEC) gather and publish this data on a regular basis, and we draw upon these sources to tell the story.

The price of a gallon of gasoline can be broken down into five pieces, as displayed in Figure 1 below – crude oil, refining margin, retail margin, taxes (federal and state), and the costs of California’s climate change programs.  The top of the chart shows the actual price for regular gasoline in California as measured by the EIA. Figure 1 includes data from January 1, 2014 through April 15, 2019. 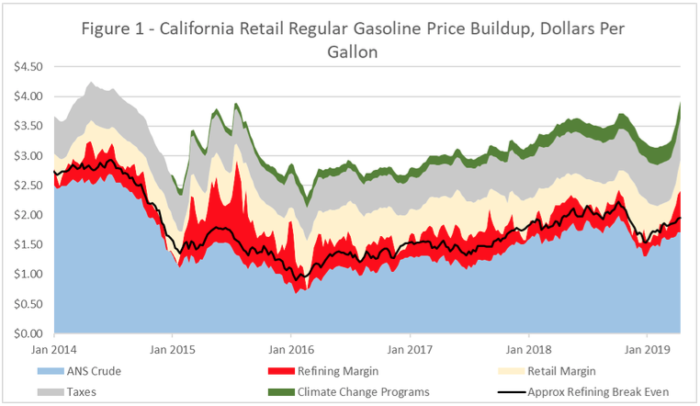 Crude oil, depicted in Figure 1 with the price of Alaskan North Slope crude, represents the rough price for crude oil delivered to California refineries out of which they produce gasoline and other products for consumption.  This price changes every day depending on how traders view the supply and demand for crude oil globally and also represents a gross margin for companies who explore and drill for crude oil and deliver it to refineries.  As we can see, while crude was roughly $2.50 per gallon in 2014 (roughly $100 per barrel), that price collapsed to $1.00-$1.60 per gallon for 2015 to the present, with some ups and downs.

The refining margin is the difference between the crude oil price and the “spot” price – the price at the first sale of the refined product – for Los Angeles regular gasoline. We use the spot price as it is the assessed clearing price for the market in which refiners and other traders can buy or sell bulk quantities of gasoline from one another if they have an excess, or a shortage versus what they have committed to selling. A bulk quantity is generally 25,000 barrels (roughly one million gallons) or more. Refining margins denote the income out of which refiners must cover their operating costs. Note: a refinery that is not producing gasoline will not realize this margin.

Figure 1 shows how volatile refining margins can be; in some months this margin drops to almost zero, while in other months, such as during the ExxonMobil refinery outage of 2015, that margin can be quite large. The black line in Figure 1 shows a rough break-even level for refineries based on a $10 per barrel level for gasoline relative to the crude oil price. This $10 value is intended to be directional and reflects the fact that refiners must not only cover the refinery operating cost but also that refineries do not make a gasoline yield of 100% and some of their production has a value less than gasoline. We can see that refiners likely operate at or below break-even margins at times.

The retail margin represents the difference between the retail price consumers pay at the pump and the spot price, less taxes and the cost of climate change programs which we will discuss below. It is important to note that this retail price published by the EIA is an average price for all of California. Within the market, there is a wide range of prices between retail outlets, perhaps as much as 50 cents per gallon. As such, some retailers realize a lower margin than what we show, and some realize a higher margin. From this margin, retailers must cover costs for the delivery of gasoline from refineries to the retail stations, and also the cost of owning and operating the station.

Retail margins have been less volatile than refinery margins, and they also have grown over time until very recently when they appear to have begun to decline.

The remainder of the price for a gallon of gasoline – taxes and the climate change program costs – are also far less volatile than refining margins and have grown over time. Taxes declined slightly from 2014 into 2016 as the retail price (and thus the sales tax) fell, and most recently increased in 2017 with an increase in the California excise tax. Climate change costs, reflecting the costs imposed on refineries for the CO2 resulting from the combustion of the gasoline, as well as a cost due to a separate requirement to lower the carbon content of the fuel, have been steadily increasing since 2015.

So how much are these various costs? The costs for these pieces are not readily apparent from Figure 1, so we broke down the retail price into three main categories and annualized the data in Figure 2, below. As the figure shows, the retail margin has hovered around 50 cents per gallon, while the refining margin has generally been less than that. As we discussed above, the crude oil price has been $1.00 to $1.60 per gallon following the large price decline in 2015. Taxes and Climate change costs have grown from roughly 60 cents per gallon in 2014, to almost $1 per gallon at this time. 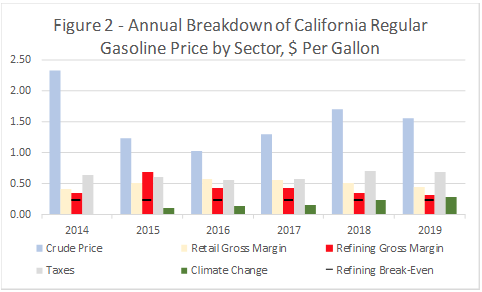 One trend of interest, shown in both Figures 1 and 2, is that total taxes and climate change program costs nudged past the combined refining and retail margins in 2018. For 2019 year-to-date, with climate change program costs increasing, taxes have well outpaced the combined refining and retail gross margins. We can also see that compared to the last time gasoline prices approached $4 per gallon (2015), less of the money is flowing to the oil companies and more to government.

When the costs of climate change programs are added into this equation, it certainly seems to play out like a “fossil fuels sin tax” akin to those seen with alcohol and tobacco. Will these taxes, paired with the recent rise in prices at the pump, lead to a decline in the use of the internal combustion engines which drive the demand for fossil fuels? Only time will tell. Stillwater will continue following these trends and reporting on them here for the months and years to come.