Following the publication of our LCFS 101: Beginner’s Guide and LCFS 101: Update, we have received requests for a similar overview of California’s Cap and Trade (C&T) Program. To that end, here we cover what C&T is, how it works, and how it’s performing so far.

What is Cap and Trade?
Like the LCFS program, California’s C&T is one of a group of programs enacted through Assembly Bill 32 (AB 32) – the 2006 Global Warming Solutions Act – signed in to law by Governor Arnold Schwarzenegger. C&T is a market-based regulation designed to reduce greenhouse gase (GHG) emissions in an effort to help California meet the AB 32 goal of reducing GHG emissions to 1990 levels by the year 2020, and ultimately achieving an 80 percent reduction from 1990 levels by 2050.

In the simplest of terms, if a business in California emits a certain level of GHG emissions, they must comply with C&T by obtaining permits (allowances) for each metric ton of GHGs they emit, and the number of overall allowances available decreases over time corresponding to an ever-more-stringent GHG reduction target.

The foundation for the C&T program is California’s Regulation for the Mandatory Reporting of Greenhouse Gas Emissions (MRR), which is also part of the AB 32 suite of programs. Under MRR, electricity generators, industrial facilities, fuel suppliers, and electricity importers are required to report GHG emissions to CARB. These reports are then verified by CARB-accredited independent third-party verifiers. A summary of the reported data is made public each year, and the C&T program’s verification and reporting all occurs through the MRR system.

The C&T program began January 1, 2012, but the enforceable compliance obligation did not begin until the following year. The “cap” is the limit on GHGs set by CARB for all capped sectors across the state, and it declines approximately three percent each year beginning in 2013. Capped entities can purchase or trade permits (allowances) to emit GHGs, which is where the “trade” portion of C&T comes in. Market actors trade limited allowances while the market as a whole reduces GHGs below annually-adjusted allowable levels. The goal is for market forces to “spur technological innovation and investments in clean energy.” Per CARB, the C&T program “sets a statewide limit on sources responsible for 85 percent of California’s greenhouse gas emissions and establishes a price signal needed to drive long-term investment in cleaner fuels, offset projects and more efficient use of energy.”

All this while allowing each entity flexibility in how to comply – purchase allowances to offset emissions, emit less and either sell excess allowances or buy fewer, or buy offset credits to reduce GHG emissions elsewhere.

How does Cap and Trade Work?
The C&T program is designed to provide covered entities the flexibility to seek out and implement the lowest cost options to reduce emissions. There are two main compliance instruments: allowances and offsets.

Allowances: Allowances are created by CARB to permit the emission of GHGs. They can be obtained through the state-run auction process, via free allocation from CARB, or via purchase from another market participant through the Compliance Instrument Tracking System Service (CITSS), which provides accounts for market participants to manage their allowances and offsets and to participate in credit market transactions with other account holders. Free allocations of allowances have been granted to stationary-source covered entities that are “trade exposed” to keep the entities (or their emissions) from simply leaving the state (this is described as “preventing leakage”). The free allocation of allowances for most sectors was set at about 90 percent of average emissions but is adjusted annually with the goal of transitioning to a more auction-centric process later in the program. For electricity distributors and natural gas utilities, free allowances come with the requirement that the value of allowances benefit ratepayers.

Offsets: Offsets are instruments granted by CARB for projects that reduce GHGs in the atmosphere. CARB offset credits may be generated by projects in the following areas: U.S. forests, urban forests, livestock, ozone depletion, mine methane capture, and rice cultivation. Typically, these projects involve reducing GHG emissions by either sequestration or conversion of the gas into another form. CARB’s protocols are rigorous standards to demonstrate that the project reduced GHG in the atmosphere for a long time. For example, a CO2 sequestration project could be granted offsets by CARB once the CO2 was in storage but the offsets granted could be revoked by CARB if the reservoir used for sequestration was later found to have leaked. For this reason, buyers of offsets demand a lower price than allowances and/or a guarantee by the seller to replace them with allowances if they are later found to be invalid. Guaranteed offsets are called “golden offsets.” CARB limits offsets used for compliance to eight percent of the total obligation in any compliance period.

There are three ways that an entity can acquire compliance instruments:

How’s it going?
So, how is the only state-wide C&T program in the U.S. performing? The program has achieved 100 percent compliance in each of the compliance periods, and California has already met its 2020 GHG reduction goal, as shown in Figure 2. 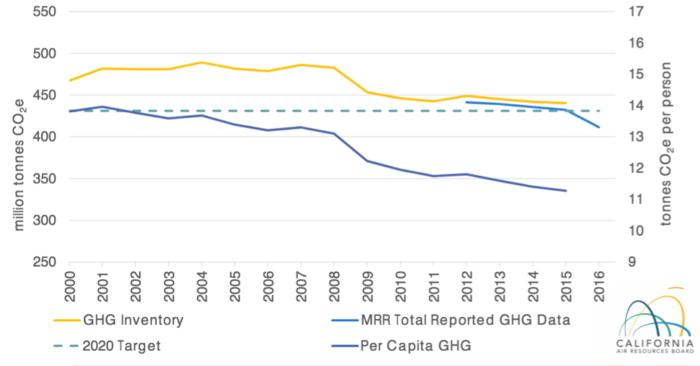 As far as auction pricing goes, allowances are clearing slightly above the auction reserve price, and proceeds of the auctions to-date (shown in Figure 3) exceed $13 billion. The state of California has received nearly $8 billion to support the state’s many GHG emissions reduction projects such as high-speed rail, clean vehicles, and solar panels for private homes. Utilities, for their part, are allocated free allowances that they are required to consign to the auction, and receive the proceeds which must be, for the most part, returned to the ratepayer as “rebates”. 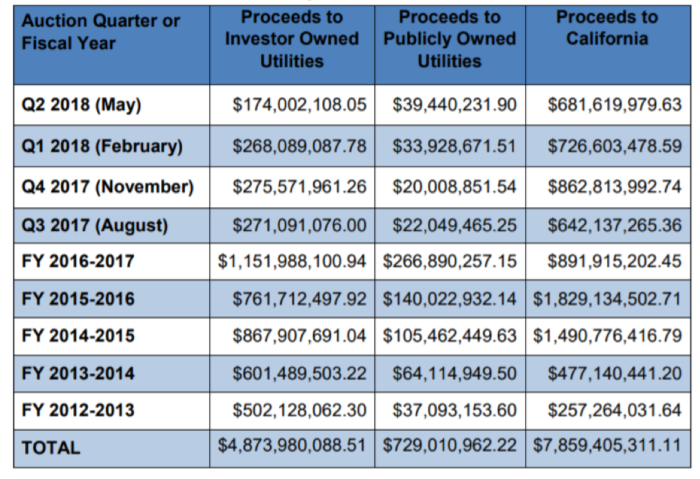 Eleven years after Arnold Schwarzenegger signed AB 32 into law with the goal of reducing California’s GHG emissions through 2020, Governor Jerry Brown signed AB 398 to extend the program to 2030 with a 40% GHG reduction target compared to 1990, so C&T is not going anywhere and will be getting more challenging. Regulatory revisions are in the works to incorporate additional changes.

How do I learn more?
Be sure to sign up for the Stillwater Monthly Newsletter for all of our latest analysis of California’s C&T program and other GHG-reduction programs in the U.S. and Canada. If you have further questions or require assistance on a project related to C&T, drop us a line.