Bubble Map Update: Is the Discount Party Over?

February 26, 2015 By Megan Wisdom from the Downstream Wizard 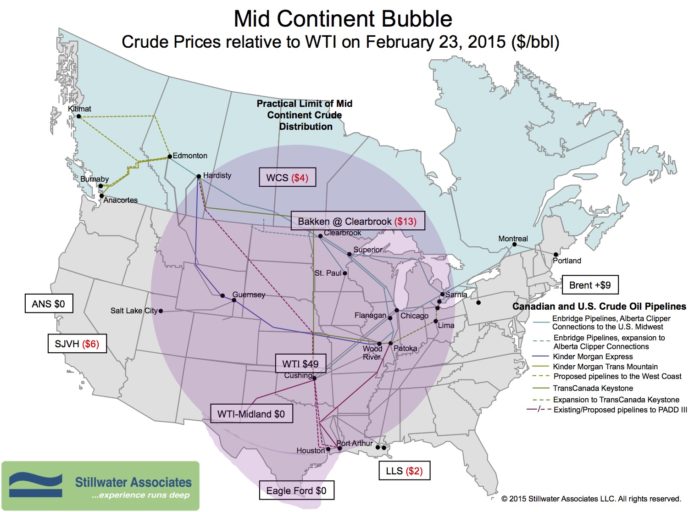 The February Bubble Map finds crude oil prices creeping back up. While the WTI price remains at $49 per barrel, Brent has risen to $9 over WTI. The spike in the price of Brent can be attributed to concerns over lower supply levels due to the unrest in Libya, which has all but shut down crude oil production in that country. The Western Canadian Select discount has narrowed to $4 under WTI, indicating that WCS flows through new pipeline systems to the Gulf Coast have improved. The Alaska North Slope price continues to remain at parity with WTI. The ANS price has decoupled from the Brent price as ANS suppliers are being squeezed out of the Pacific Northwest by crude-by-rail from the Mid Continent.

Taking advantage of the market contango, traders are stashing supplies wherever they can find space. According to the EIA, last week crude inventories in the U.S. hit their highest levels in 80 years, at 434 million barrels.

Is the party over for retail prices? We think we have seen the bottom of the low pump price bonanza, especially in Southern California. Since the ExxonMobil Torrance refinery accident will take a significant portion of the refined product out of the region, supplies will be tight and prices have already started to rise. See Dave Hackett’s paper Gasoline Price Hike: Why are Southern California Gasoline Prices on the Rise? to find out more.