June 28, 2015 By Megan Wisdom from the Downstream Wizard 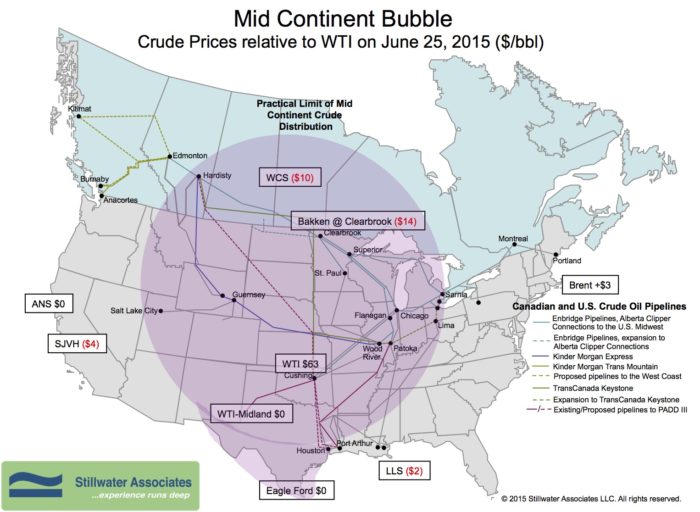 The June Bubble Map shows crude oil prices continuing the upward trend from last month. WTI is up $4 since our last post at $63 per barrel on June 25th. The WTI/Brent differential has tightened to $3 over WTI. The Bakken discount has widened to $14 under WTI. The Western Canadian Select discount has also increased to $10 under WTI. On the Gulf Coast, crude oil from the shale formations in Texas like Eagle Ford were priced at parity with WTI and Louisiana Light Sweet was $2 under WTI. On the West Coast, the Alaskan North Slope price is at parity with WTI and the San Joaquin Valley Heavy discount has increased to $4 under WTI.

The effects of the May 19th Refugio oil spill in Santa Barbara will continue to reverberate for years to come. While many beaches in the area have reopened since the spill, there is no timeline for cleaning the last eight miles of shore near Refugio State Beach. So far, the cleanup has cost Plains All American Pipeline $96 million. While lawsuits and congressional investigations pile up, the local supply chain is dealing with the domino effect of the pipeline rupture. Crude oil produced off the Coast of Santa Barbara is piped onshore to processing facilities, including the Exxon Mobil Las Flores Canyon Facility in Santa Barbara County. The Las Flores Facility treats the crude oil by separating natural gas and water from the oil. The treated oil is then taken via Plains All American Pipeline’s Line 901 to the Phillips 66 Santa Maria refinery and to the San Joaquin Valley where it can be sent to refineries in Los Angeles or the San Francisco Bay. When Line 901 ruptured and was shutdown, the treated crude oil became trapped at the Las Flores Canyon Facility. With little storage available, Exxon Mobil was forced to halt off-shore production. And with a drastically reduced feedstock, the Phillips 66 Santa Maria refinery has had to operate at a reduced rate. Santa Barbara County rejected Exxon Mobil’s application for an emergency proposal to truck supply to the Santa Maria refinery. Until a solution can be reached, both the Las Flores Canyon Facility and the Phillips 66 Santa Maria refinery could be operating at greatly reduced capacity.

The shutdown will impact crude oil production from offshore Exxon Mobil, PXP and Venoco platforms, totaling about 35 thousand barrels per day (kbd), most of which is run at the 44 kbd Santa Maria refinery. Since Santa Maria processes crude for the Phillips 66 San Francisco Bay refinery in Rodeo, most of the feedstock impact could be felt at Rodeo. The Rodeo refinery could have to increase crude runs from other sources if it is to maintain production rates.