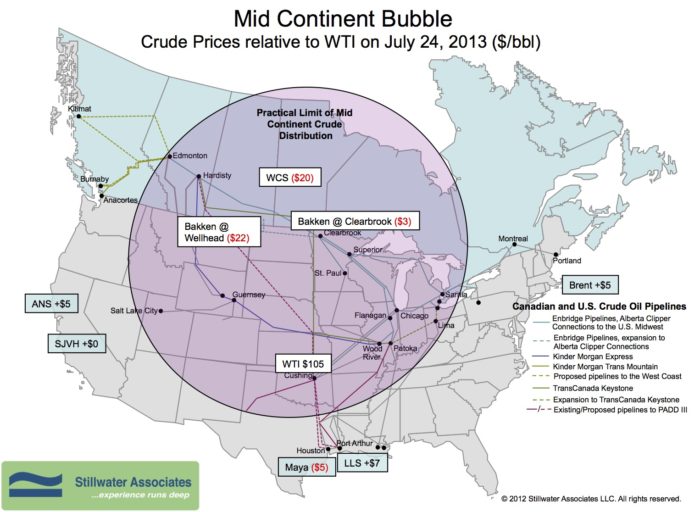 Mexican Maya differential returns to the latest edition of the Bubble Map! The last time Maya appeared on the Bubble Map, way back in April, it was $7 over. We found a new price-reporting source for Maya that show it $5 under WTI on July 24th.

Yesterday, Bakken at the wellhead was discounted by $22, but $3 under by the time it gets to Clearbrook, MN. LLS was priced $7 over WTI and Brent was $5 over. San Joaquin Valley Heavy continues to post just cents over WTI. Alaska North Slope was $5 over WTI on July 24th. The WCS discount has widened to $20.

We at Stillwater were saddened to hear of the tragic events on July 6th in Quebec. Our thoughts and prayers are with the families of the victims and the people of Lac-Megantic. The enormous increase in rail transportation of Mid Continent crude oil must coincide with the highest level of safety and security the railroad industry can provide. On Tuesday Canadian transportation authorities announced tougher regulations in response to the tragedy. The regulations include ensuring all locomotives attached to tank cars transporting dangerous goods are staffed by two man crews and are not left unattended on a main track.

The sad events in Lac-Megantic were certainly on the minds of Port of Vancouver, Washington commissioners on July 23rd. The commission voted unanimously, but with full consideration of safety and enviromental concerns, to approve the lease for a 380,000-barrel per day oil terminal proposed by Tesoro Corp and Savage Companies. Large energy infrastructure projects are often met with strong opposition in the Northwest, but this project has been particularly contentious because Tesoro will be bringing in up to four train loads per day of Bakken crude oil to ship to refineries in Alaska, Washington and California.

The terminal is projected to generate $45 million in revenue for the Port in the first 10 years of the lease. It is also expected to create 250 construction jobs and 120 permanent jobs. With such an opportunity for the Port and surrounding Clark County, Port of Vancouver commissioners felt the benefits outweighed the risks and that if they did not approve the project another West Coast port certainly would.

The proposal moves on to permitting which is expected to take about 18 months and then must get final approval from Governor Jay Inslee.