Breaking Out of the Mid Continent Bubble 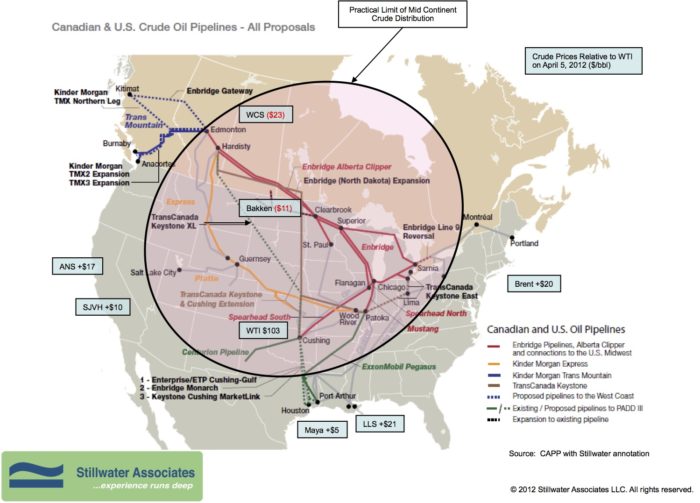 Oil market observers know that there is a disconnect between the prices of the two benchmark light sweet crude oils, West Texas Intermediate and North Sea Brent. In the past, these oils traded for about the same price.

The difference, or spread, between WTI and Brent opened up when more and more crude oil began to be produced in the Mid Continent of North America, primarily caused by the huge increase in crude oil production in North Dakota. All of the refineries and pipelines in the Midwest became saturated with mid-continent oil, including Canadian oil. At the same time, supply of light sweet crude oil in Europe and Africa have been reduced, raising the price of Brent.

In the past, WTI and Brent flowed north to refineries in St. Louis, Chicago and Detroit. Today, those refining enclaves are full of domestic oil and the mid-continent flow goes south.

Well, the pipelines aren’t set up to move crude south of the hub at Cushing, OK. At least not yet. For now, however, the prices of crude oil in the interior reflect the cost of moving oil inefficiently to the refineries on the Gulf Coast. The cost of moving the last barrel of WTI by truck to Houston is around $20/barrel, which defines the spread between WTI and Brent.

The map on above shows the price of WTI on Thursday 4/5, as well as the spread between WTI and other ‘marker’ crudes. What is really interesting is the spread between Western Canadian Select crude and Alberta and Alaska North Slope crude on the West Coast. This huge arbitrage will drive investment to move WCS to the West Coast. Similarly, the difference between Bakken and Brent will propell North Dakota crude to move to the refineries on the East Coast.

So, how long will the big differences between the interior and the coasts last? We think the drillers will go faster than the pipeliners for another five years or so.

What do you think?