August 15, 2012 By Megan Wisdom from the Downstream Wizard 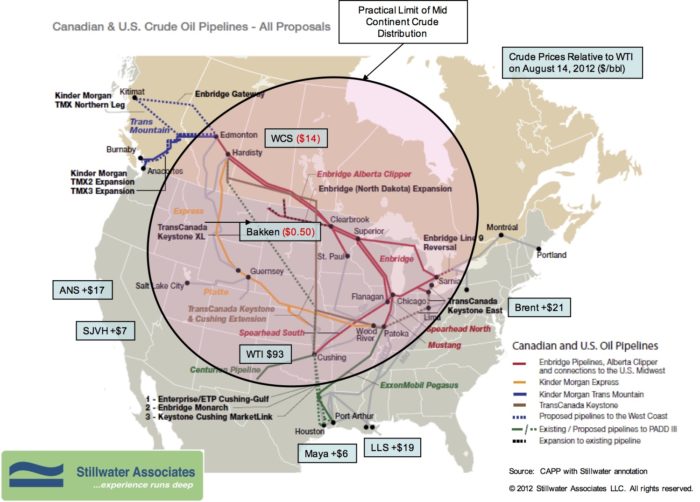 The price of Bakken is nearly in line with WTI this week, to just $0.50 under. The price of WTI remained about the same, closing at $93 on August 14th. The spread between WTI and WCS has tightened to $14 under, from $16 under WTI on August 7th. The spreads between WTI and most coastal crudes are up slightly. One of our clients pointed out that the San Joaquin Valley Heavy differential had not changed last week and remains steady at $7 to $8 over. We appreciate the feedback.

We can attribute smaller discounts in the Mid Continent to a relatively quiet week in the distribution network – no major disruptions there. The big news, of course, is the Chevron Richmond refinery fire. Prices at the pump shot up all over the West Coast, including the Pacific Northwest and Nevada, after the fire on August 6th. But predictions about dire supply constraints may be overblown.  So far, it’s still unsafe to inspect the crude unit and speculation as to when it will be repaired and back up and running is anywhere from two to six months.

In other big news, the BP Carson refinery has a buyer! Tesoro has agreed to purchase the refinery and the logistics facilities for $1.125 billion. We note that most of the purchase value seems to be in the terminals and pipelines, and not in the refinery. With Tesoro’s Wilmington refinery right next door, combining the two facilities will make them efficient enough to meet air quality standards and save the company about $250 million by 2015.