For the past week, dozens of lightning-induced wildfires have raged in California, resulting in unhealthy, smoke-laden air. The air quality is so poor that it has exceeded particulate matter (PM10 and PM2.5) ambient air quality standards. PM10 is smoke that can be trapped on a 10-micron filter, PM2.5 is even smaller smoke particles that are trapped on a 2.5-micron filter. Both PM10 and especially PM2.5 smoke particulates are believed to pose health risks to us all. This week, smoke monitoring stations are reporting peak particulate levels of 100, 200, and 300 micrograms per cubic meter (µg/m3). The figure below shows the poor air quality experienced across most of the state due to wildfire smoke. 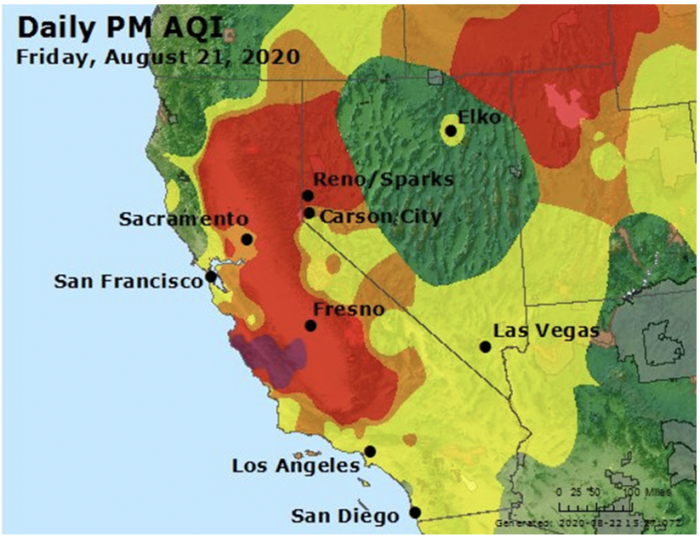 These fires and the resultant air quality are both dangerous and daunting challenges to tackle. Though it might not solve these problems entirely, there is actually a silver lining when it comes to vehicles’ contributions to air quality. Since 2007, all diesel vehicles sold in the U.S. are equipped with soot filters that reduce PM10 & PM2.5 by 97-99% lower than diesels sold in 1990. Today’s cleanest diesel and renewable diesel (RD) fueled trucks and buses operating in high PM2.5 and PM10 areas are cleaning the smokey air. In fact, today’s clean diesel and RD vehicles are even better than battery electric Zero Emission Vehicles for reducing smoke in air as dirty as California’s during fire season.

Sound too good to be true? Let’s look at the data. The figure below displays several 2012-2015 model-year clean heavy-duty diesel vehicles (HDDVs) tested at Penn State’s Altoona Bus Emission Test Facility. These emission tests are performed in laboratory clean air where particulates are removed during testing. Alongside these results, we have displayed ambient PM10 pollution impacts shown if the same vehicles were operated on the road this week with California’s ambient PM pollution levels. Several HDDVs function as zero emission vehicles on a particulate matter basis when operated in 100-130 µg/m3 PM air, and still more become net negative emission vehicles – on a particulate matter basis – in ambient air pollution generally exceeding 150-200 µg/m3 PM levels. Negative emissions occur when the tailpipe PM levels are reduced lower than air consumed by the vehicles. In this case, the HDDVs are actually scrubbing the air clean.

The dirty little secret is out: Only clean HDDVs provide air-cleaning benefits in locations where air quality does not meet ambient air pollution standards. Battery-powered ZEVs driven through the dirty air leave it unaltered and uncleaned.