Are EVs More Fuel Efficient Than Gasoline and Diesel Cars?

The U.S. Environmental Protection Agency (EPA), California Air Resources Board (CARB), and EV promoters often claim EVs have three times higher fuel economy than their gasoline counterparts. This is like saying eggs come from grocery stores, which is true, but ignores the fact that eggs originate from laying hens before being shipped to and sold from grocery stores. Similarly, electric vehicles (EVs) are very efficient – almost as energy efficient as the highest fuel economy gasoline and diesel vehicles – and EVs do have three times more fuel economy than their gasoline and diesel counterparts, but this is only true when looking solely at the conversion of energy stored in their batteries into power for propelling the vehicle and ignoring the 59% energy losses upstream from power plants and power lines.

This misunderstanding around EV miles per gallon (mpg) estimates began in the early 1990s with the production of the earliest EVs. At that time, EV promoters converted the EV’s electricity consumption (in kilowatt-hours) directly into gasoline gallon equivalents. This approach gave EVs 100-150 mpg fuel economy ratings but didn’t take into account the fact that electricity has to be produced. To provide a more accurate accounting of the full picture of EV fuel economy, the Argonne National Laboratory (ANL) stepped in to develop a Wells-to-Wheels (WTW) analysis for industry and government to use. In part, this WTW analysis was intended to deepen society’s (and EPA’s) understanding of this topic to avoid misrepresenting EV-to-ICE (internal combustion engine) power train comparisons. Today, the ANL WTW methodology has been embedded in the widely-used GREET model and become the cornerstone of modern greenhouse gas analysis for vehicles, especially EVs. When accounting for electricity production losses, ANL’s WTW methodology shows that EV fuel economy averaged 45 mpg, not the 100-150 mpg originally claimed. Still, EPA, CARB, and others promoting battery electric vehicles (BEVs) repeat the claim that EVs have three times the fuel economy of their gasoline and diesel counterparts, ignoring ANL’s methodology.

Figure 1 below displays the unadjusted, laboratory Highway Cycle fuel economies for all EVs offered in the 2019 Model Year as reported by EPA. The blue bars show EVs’ EPA-published Fuel Economy electricity consumption values, converted into gasoline-gallon-equivalents. By this method, all EVs have over a 100-mpg fuel economy rating – three times higher than the highest gasoline vehicles’ fuel economy. By only taking into account the efficiency of the use of the electricity once it is in the vehicle rather than also considering the efficiency of the production and transmission of the energy, however, this EV electrical energy consumption conversion to gasoline equivalent gallons only represents roughly half of the energy required by the EV.

The orange bars in Figure 1 represent EPA’s adjusted fuel economy values including California’s statewide average power plant efficiency of 44.4%, less 7% power line losses, for a total efficiency of 41.2% energy efficiency throughout the production and transmission process (a 59% energy loss). The green horizontal line represents EPA’s unadjusted, laboratory fuel economy values for the highest fuel economy gasoline and diesel cars. Finally, the black dashed line adjusts for the 15% refinery losses for gasoline and diesel production. A more accurate WTW comparison is made by contrasting the black dashed line to the orange bars. This comparison shows that EVs have similar fuel economy as the best gasoline vehicles. Note: The fuel economies for all vehicles shown here are higher than those published by EPA Fuel Economy Guides. Shown here are the direct laboratory results not adjusted downward to reflect on-road realities which EPA includes in their Fuel Economy Guides. The differences between power trains is what we are most concerned with for this discussion rather than the absolute values. 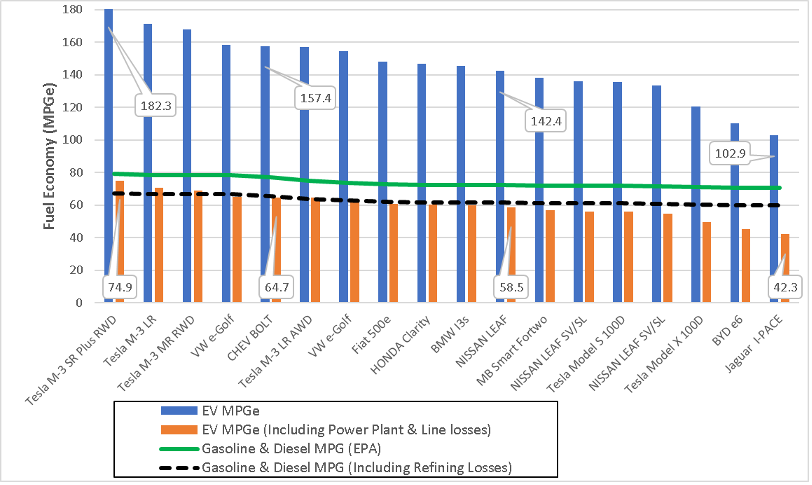 According to EPA’s city fuel economy values EVs do appear to have better fuel economy than their gasoline and diesel counterparts when operated in city (as opposed to highway) driving conditions. However, gasoline and diesel vehicles are officially tested on a different City Cycle than EVs, precluding an “apples-to-apples” fair comparison. Figures 2 and 3 show the EV City Cycle is tested on the EPA Urban Dynamometer Driving Schedule (UDDS) while gasoline and diesel vehicles are city-cycle tested on the Federal Test Procedure (FTP) which is composed of the UDDS followed by repeating the first 505 seconds of the UDDS. It is often called the FTP75, as it was developed in 1975.

The genesis for the EV testing on the UDDs cycle was due to the first-generation EVs’ inability to drive the full FTP75 test cycle. The EV City Cycle test (UDDS) has a lower average speed and requires less energy, enabling EVs to drive more complete cycles and yielding inflated fuel economy values for the EVs tested. As such, one cannot fairly compare EVs’ results on the UDDS to gasoline or diesel vehicles tested on the more energy consumptive FTP75 cycle. 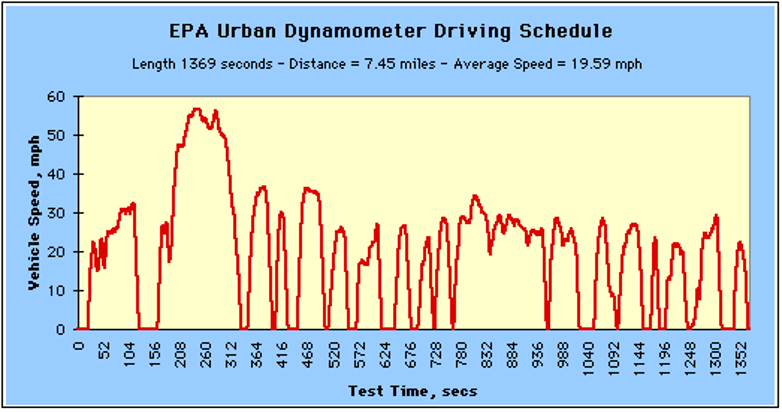 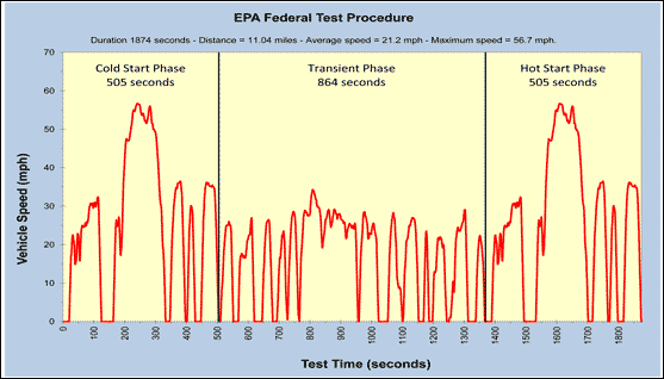 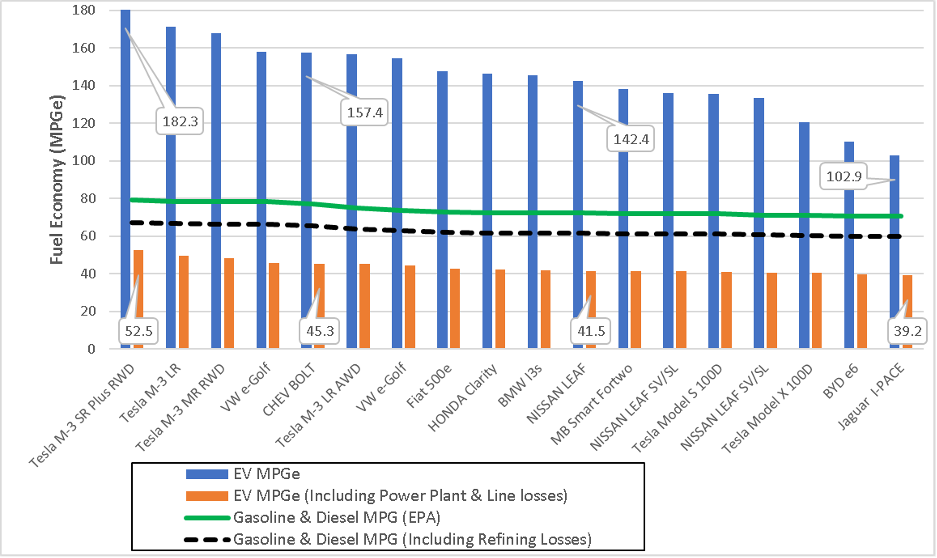 As shown in Figure 1, EVs consume the same energy per mile driven as the most efficient gasoline and diesel vehicles in warm weather, and Figure 2 shows EVs consume 33-45% more energy in cold weather than the highest fuel economy ICE vehicles. For anyone concerned about the energy required to support a vehicle fleet, it would be a mistake to think – as EPA suggests – that EVs require three times less energy compared to the best fuel economy ICE models. EV proponents suggest that the power for EVs is renewable or will become all renewable over time. There are, however, significant limitations to greater renewable energy expansion that suggest we are close to the upper limit on (intermittent renewable supply).  Because of the fuel economy misconception explained above, the investment in renewable power generation, infrastructure, and power storage is too low by a factor of three. This is especially important because 68% of California’s electrical power is from combustion-based energy production. Investments in most renewable power generation, infrastructure, and power storage to support EVs will not suffer the 59% higher power requirements, but they will require up to 20% more energy than EPA reported values if battery storage is required to compensate for the diurnal variability of wind and solar power generation.