Effective January 1, 2017, the U.S. Environmental Protection Agency (EPA) began requiring all U.S. gasoline to meet an annual 10 parts per million (ppm) average sulfur requirement as part of its new Tier 3 vehicle and fuel regulations. (Stillwater wrote a quick guide to Tier 3 back then, and it’s still handy now.) While the new Tier 3 fuel requirements remove small amounts of sulfur from vehicle emissions, the primary benefit of the new fuel is that it enables new Tier 3 vehicles and their catalysts to decrease exhaust emissions of NOx and other ozone-forming emissions.

The 10-ppm sulfur average required by Tier 3 applies at the refinery gate, which is the point where finished gasolines or blendstocks for oxygenate blending (BOBs) leave the refinery. Individual batches can still have up to 80 ppm sulfur after the refinery gate and up to 95 ppm downstream of the refinery. Included in the program is a six-year credit averaging, banking, and trading provision that allows refineries that cannot produce qualifying gasoline to buy credits from other refineries in order to comply with the Tier 3 requirement. These credits are generated by refineries who produce Tier 3 gasoline with an annual sulfur average below 10 ppm.

Small Refiners Exemption
A three-year extension until January 1, 2020 of the requirements for qualifying refineries and small business refiners is also included in this program.

To qualify for the small refiner provisions, a refiner must:

A one-year deficit carry-forward provision is included in the program that allows an individual refinery that does not meet the 10-ppm standard in a given year to carry a deficit forward for one year if necessary, as long as they make up the deficit the following year. There are also the typical EPA hardship provisions that allow refiners to petition for compliance assistance based on extreme hardship and/or extreme unforeseen circumstances.

Measurement and Testing
EPA requires use of the following ASTM methods for Tier 3 property testing, certification, and release: 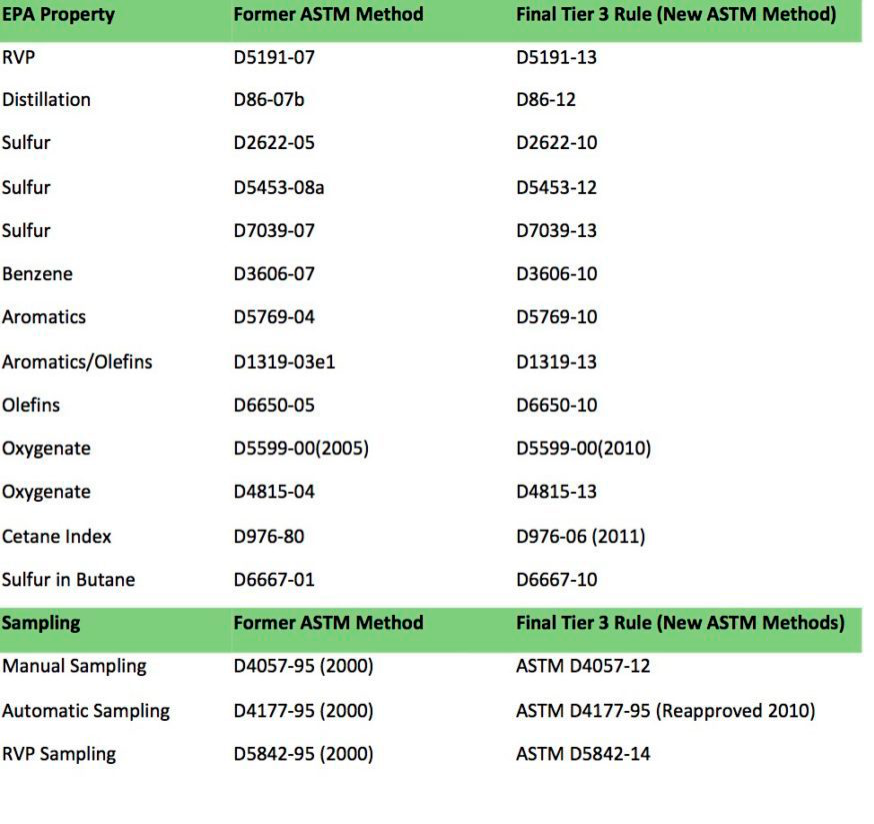 Octane Concerns
For several years, some industry experts have expressed concern that the processes to reduce sulfur in gasoline to 10 ppm or lower, will result in a significant loss in gasoline octane at challenged refineries. EPA has recognized that there will be some minor loss of octane but has felt that refineries can adapt to cover this minor loss. As 2020 approached, EPA did not see a problem and determined that the credit system would take care of any refineries that had potential problems complying with the 10-ppm standard.

Contact Stillwater with any questions you may have around Tier 3.