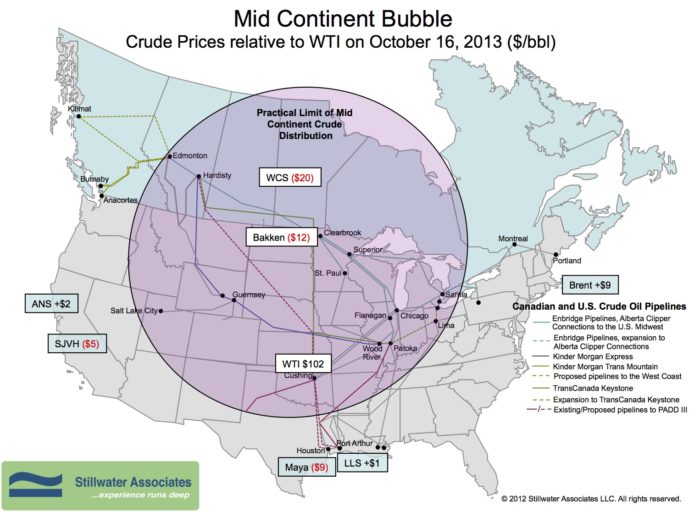 Well…not really. But the Bakken discount has widened since we last checked in. On October 16, Bakken at Clearbrook, MN was posted at $12 under WTI. LLS was priced $1 over WTI and Brent was $9 over. San Joaquin Valley Heavy has dropped to $5 under WTI. Alaska North Slope was $2 over WTI on October 16. Western Canadian Select was discounted to $20 under WTI.

The spread between WTI and Bakken has widened as production in North Dakota has skyrocketed, once again outpacing transportation capacity. Production in August grew by 29 percent from a year ago, to 900,000 bpd.

The astounding increase in production has been a boon to the North Dakota economy, but what one might call oil boom chaos has put farmer Steve Jensen in the middle of a wheat field full of crude. The pipeline owner, Tesoro, will certainly bear responsibility for 20,600 barrels spilled in Tioga, ND. However, state officials failure to release timely information about the spill makes them look confused and disordered. It took 11 days to inform the public of the spill. There are currently no state laws requiring public notification of spills. This is presumably because a major oil spill just wasn’t a possibility until a few years ago. The state is now reviewing what would trigger a spill notification. These kinds of disasters are the reason it is vital to have a robust state energy assurance plan in place. An energy assurance plan, including appropriate measures for communicating with the public, would put state officials in charge of the situation. Instead of the tail wagging the dog.

So while the northern portion of the Keystone XL pipeline may never get approval, things are moving along swimmingly for the southern portion. TransCanada anticipates the Cushing to Nederland, TX section will be completed by November. Expect the WTI-Brent differential to narrow as the 700,000 bpd pipeline comes on line at the end of the year.

The Bubble Map will make its debut at the API Storage Tank Conference next Thursday, October 24, in San Francisco. Dave Hackett will be speaking about the crude oil market and the outlook for increased crude-by-rail shipments out of the Mid Continent.